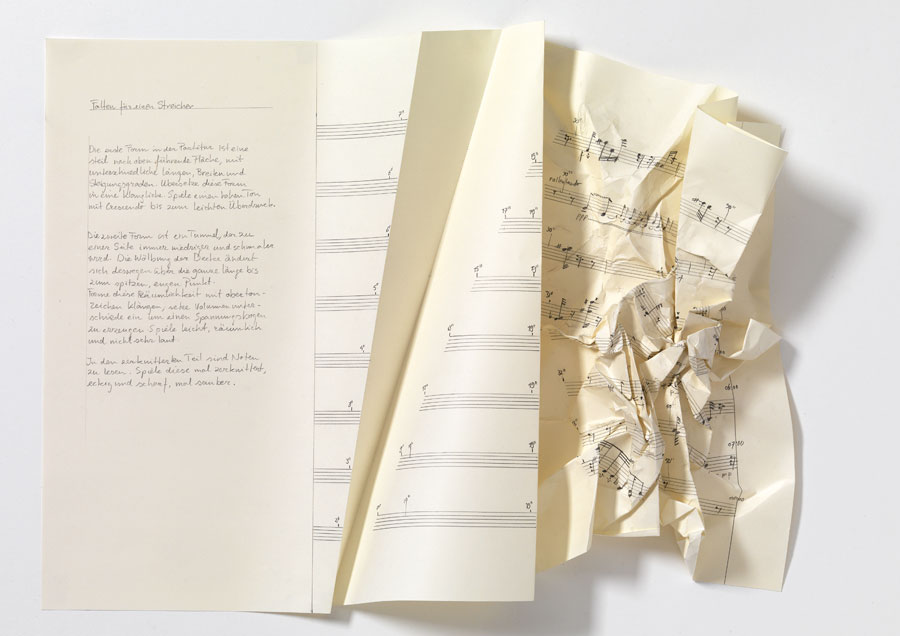 William Engelen’s Falten [Folds] build musical compositions from folded paper. The artist shapes the paper into three-dimensional forms—ovals, cones, or even knots. He then hand-draws a staff notation on the sections of the paper that are not hidden in the folds. Through this structure of creases and lines, Engelen organizes, through both intention and chance, the elements of sound and silence in each piece. The landscape of the paper determines the music that can be made from it. In performing Falten, musicians “walk” through this architectural landscape, using the paper’s planes, heights, and structures as parameters for qualities in volume, pitch, rhythm, tension, character, and the spatiality of sound. The lines on the page and resultant folds manifest the score as an intricate drawing. Falten for Percussion consists of eight parts, and will be debuted by the celebrated percussion ensemble Talujon. Presented in connection with the exhibition William Engelen: Falten, on view at The Drawing Center, November 22 – January 12.

Since 1990, Talujon Percussion has been committed to the expansion of the contemporary percussion repertoire as well as the education and diversification of its worldwide audience. Over the past 20 years, Talujon has commissioned dozens of new works for percussion quartet. Founding member and leader Michael Lipsey is the head of the Percussion Department at the Aaron Copland School of Music.

The performance version of Aki Onda’s Damaged project consists of slide projection of found images and sound improvisation. Since 2011, Onda has been taking photographs of torn posters which are often found along a street or in a subway station. These images were torn and collaged by anonymous people in urban environment of New York City. During the performance, two musicians, either solo or duo, interpret images as visual scores and improvise sounds by tearing sheets of paper.

Aki Onda is an electronic musician, composer, and visual artist. He is particularly known for his Cassette Memories project – works compiled from a “sound diary” of field-recordings collected by Onda over a span of two decades. Onda’s musical instrument of choice is the cassette Walkman. Not only does he capture field recordings with the Walkman, he also physically manipulates multiple Walkmans with electronics in his performances. In another of his projects, Cinemage, Onda shows slide projections of still photo images, shot by himself, as a performance or installation. Onda has collaborated with artists such as Michael Snow, Ken Jacobs, Paul Clipson, Alan Licht, Loren Connors, MV Carbon, Oren Ambarchi, Noël Akchoté, Jean-François Pauvros, Jac Berrocal, Lionel Marchetti, Linda Sharrock, and Blixa Bargeld. Onda was a 2012 Artist-In-Residence at ISSUE Project Room.

Brooklyn based composer/tinkerer/builder Pat Spadine exercises his wonder for the physics that bind the universe, creating the intertwined aural and visual aspects of his work, under the umbrella moniker “Ashcan Orchestra.” Employing children’s handbells, balloons, homemade circuitry, household electronics, and other peculiar instruments, he can be found, with the help of his friends, bringing his menagerie to life at a basement/gallery/venue near you.