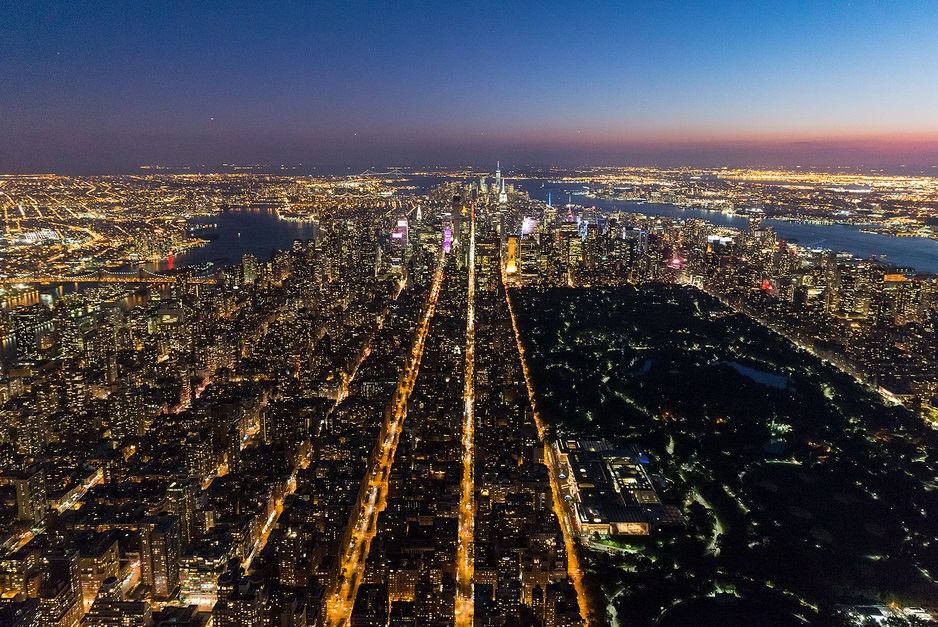 Photographer Iwan Baan was commissioned by the Museum of the City of New York for 'Saving Place: Fifty Years of New York City Landmarks'

Iwan Baan, one of the world’s leading photographers, was commissioned by the Museum of the City of New York for the exhibition ‘Saving Place: Fifty Years of New York City Landmarks‘. A comprehensive exhibition exploring the roots and impact of a landmark preservation movement that has transformed the City and has been an engine of New York’s growth and success.

Baan traversed all five boroughs during the day and the night, equipped with a Google map of landmark sites. He even rented a helicopter to capture aerial views that provide his street views with panoramic context.

Dutch photographer Iwan Baan is known primarily for images that narrate the life and interactions that occur within architecture. Born in 1975, Iwan grew up outside Amsterdam, studied at the Royal Academy of Art in The Hague and worked in publishing and documentary photography in New York and Europe.

Iwan fell unexpectedly into the subject of architecture in 2005 when he proposed to Rem Koolhaas that he document a project by the architect’s firm OMA. The proposal led to his first major project, the documentation of the construction of OMA’s China Central Television (CCTV) building and Herzog & de Meuron’s completed National Olympic Stadium, both in Beijing. Iwan collaborates with the world’s foremost architects, photographing institutional, public and private projects by Rem Koolhaas, Herzog & de Meuron, SANAA, Morphosis, Frank Gehry, Toyo Ito, Steven Holl, Diller Scofidio + Renfro and Zaha Hadid, and young architects like Sou Fujimoto, Selgas Cano among others. His work is characterized by the portrayal of people in the architecture, the context, society and environment around architecture. He also completes documentary projects on social initiatives such as schools, libraries and community centers in Africa, Asia and Latin America.

Iwan’s images appear frequently in The New York Times, Domus, Abitare and The New Yorker, among others. Current and upcoming exhibitions include Small Scale, Big Change: New Architectures of Social Engagement at the Museum of Modern Art and Richard Neutra in Europe, which opened this May at the Marta Herford Museum in Germany and will travel to several other locations. Iwan’s work has also been included in exhibitions at the Architectural Association in London and the AIA New York Chapter.

He frequently collaborates on books covering diverse subjects including SANAA Studios, the Porsche Museum, Steven Holl’s Knut Hamsun Museum, and the new book, Brasilia – Chandigarh: Living With Modernity with Lars Mueller Publishers. Upcoming books include a book with Lars Mueller Publishers and the Benesse Foundation on the Setouchi islands in Japan, and the book “No More Play” with Michael Maltzan and USC, School of Architecture in Los Angeles on the city, published by Hatje Cantz.

Many believe New York’s pioneering Landmarks Law, enacted in April 1965, was the key factor in the rebirth of New York in the final quarter of the 20th century. It fostered pride in neighborhoods and resulted in neighborhood preservation in every borough, connecting and motivating residents and bringing new economic life to older communities. It ensured that huge swaths of the city remain a rich complex of new and old. It also ensured the creative re-use of countless buildings. At the same time, a new body of important architecture has emerged as architects, clients, and the Landmarks Preservation Commission devised innovative solutions for the renovation of landmark buildings and for new buildings in historic districts. The law spawned creativity in architects’ responses to building preservation that has enhanced the cityscape in all five boroughs.

Presented to celebrate the law’s 50th anniversary, Saving Place will be organized by Donald Albrecht, the City Museum’s Curator of Architecture and Design and Andrew S. Dolkart, the Director of the Historic Preservation Program at Columbia University, with consulting curator Seri Worden, currently a consultant with the National Trust for Historic Preservation.