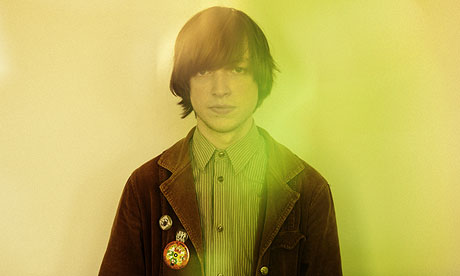 Jacco Gardner is a Dutch baroque pop multi instrumentalist. He creates a unique sound by combining the sounds of harpsichord, strings, flutes and other classical instruments with raw psychedelic effects.

2013 has been the year of Jacco Gardner. After taking Europe and the USA by storm and releasing two killer singles and his critically acclaimed full-length album “Cabinet of Curiosities”, Gardner returns with two new, exclusive tracks for Trouble in Mind.

Recorded at his own Shadow Shoppe Studios in Zwaag, Netherlands, Gardner has again employed the drum skills of Jos van Tol, but plays all other instruments himself. “The End Of August” begins with a gentle, lilting guitar strum and bubbling mellotron, before kicking into a subtle, driving chorus that perfectly captures the ennui one feels as summer ends and fall begins. “Notus” resides on the flip side — a loping, lysergic instrumental that pitches a tent in between the works of Perrey-Kingsley and Stereolab, while flirting with a slightly progressive song structure, moving beyond the Syd Barret-influenced baroque-pop of earlier works. This single is pressed on black vinyl, comes housed in the new Trouble in Mind company sleeve and includes a download. The perfect single to usher in Autumn!

For more information please check out his website http://www.jaccogardner.com/