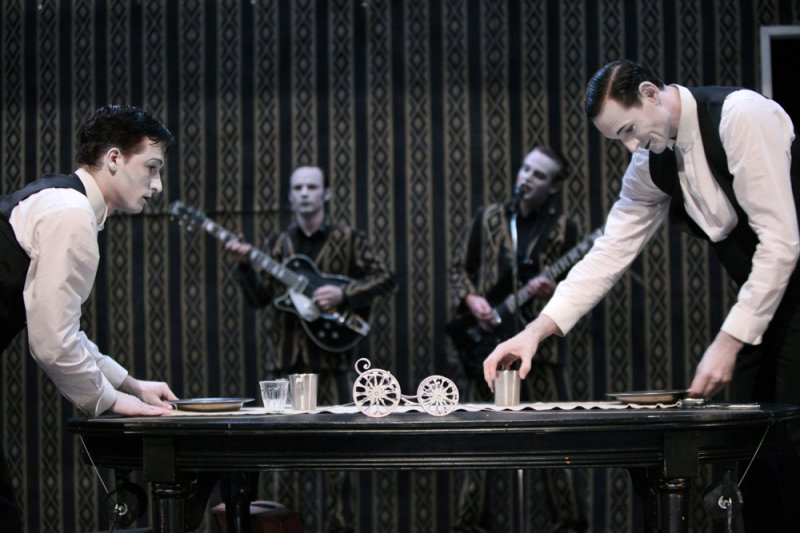 Along with musicians Ralph Mulder and Leonard Lucieer of the band Alamo Race Track, Jakop Ahlbom is bringing the magic from silent movies to the theatre stages with this play 'Lebensraum' on April 9-13 at ArtsEmerson in Boston.

Along with musicians Ralph Mulder and Leonard Lucieer of the band Alamo Race Track, Jakop Ahlbom is bringing the magic from silent movies to the theatre stages with this play ‘Lebensraum‘ on April 9-13 at ArtsEmerson in Boston.

Two men, who live together in one tiny room. Ingenious they are, the lack of space is not an issue. Everything has multiple functions: the bed operates as a piano and the bookcase serves as a fridge. To compensate the absence of a woman, the two create a mechanic cleaning lady. But soon they’ll figure that this lady is not just planning on cleaning in peace. A doll with an opinion. Tensions are arising, and the room gets smaller and smaller. The men latest invention is downfall.

Ahlbom’s new theatrical piece is inspired by the works of actor and filmmaker Buster Keaton. Keaton was a pioneer in the worlds of slapstick and physical comedy. At that time, silent movies like Keaton’s were accompanied by classical piano music. This piece is going to be live accompanied by Ralph Mulder and Leonard Lucieer of the band Alamo Race Track. In contrasts to the sound of the 20’s, Alamo and Jakop Ahlbom create a modern scenery, keeping the conventional 20’s style in mind.

Jakop Ahlbom won the VSCD Mime prize for his theatre play Lebensraum. From the jury-report: “Jakop Ahlbom has proven again with this performance that his way of merging styles produces beautiful theatre. He knows exactly how to blend all of these elements to a surprising, alienating, yet moving and overwhelmingly funny piece of art. Lebensraum is a worthy next step in his impressive line of work that Jakop Ahlbom had built the past decade.”

Jakop Ahlbom (1971, Sweden) has worked for years on his own unique theatrical trade mark, were theatre, mime, dance, music and the world of illusion come together as one. With his fragmental way of working and his own mixture of disciplines, he creates images that in a way lager than theatre. Since 2000 Alhbom worked on diverse body of works like Vielfalt (2006) De Architect (2008) and Innenschau (2010). His creations were shown and selected for national prices (Dutch Theatre Festival), as international (Salzburger Festspiele).