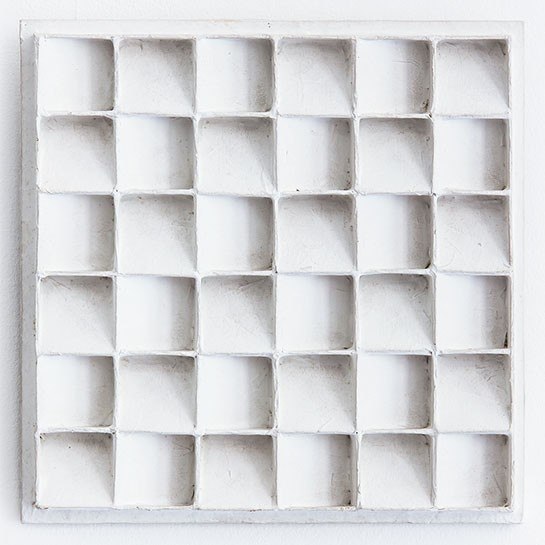 David Zwirner presents an exhibition of works by Jan Schoonhoven, on view from January 9 until February 14, 2015.

David Zwirner is pleased to present an exhibition of works by Jan Schoonhoven (1914–1994) at the gallery’s 537 West 20th Street location, on view from January 9 until February 14 2015 (opening reception January 9, 6-8 PM). The show will feature an extensive group of the artist’s sculptural wall reliefs and works on paper from the late 1950s to the mid-1970s in what will be the first significant presentation of the artist’s work in America in over a decade.

Regarded as one of the most important Dutch artists of the late twentieth century, Schoonhoven is recognized for his innovative and systematic investigations into light, form, and volume. Despite spending the majority of his life in Delft, the Netherlands, where he worked from 1946 to 1979 as a civil servant for the Dutch Postal Service, Schoonhoven rose to artistic prominence as an active and influential member of the international avant garde. Beginning in the 1950s, he played a central role in the Nederlandse Informele Groep (Netherlandish Informal Group) and the Nul-groep (Nul Group)—which were affiliated with the European Informel movement and the ZERO Group respectively. Rejecting illusionism and subjective expression, these artists shared a collective interest in exploring the essential, objective forms and properties of art. Schoonhoven in particular developed a highly unique body of work that centered on a sustained investigation of serial abstraction, the monochrome, and the grid. In their carefully structured yet sensitively rendered forms, the artist’s works have been fittingly described as “cool, strictly ordered, [and] well considered… but also familiar, humane, and intimate.”1

Providing a comprehensive overview of the development of Schoonhoven’s sculptural wall reliefs, the exhibition will trace their evolution from the earliest iterations to the most iconic and mature examples. While Schoonhoven began his artistic career making colorful drawings inspired primarily by the work of Paul Klee, he established his own singular artistic vocabulary in the late 1950s, when he began to develop his technique for making reliefs. Gradually expanding his compositions into three dimensions, Schoonhoven utilized cardboard and papier-mâché to lend depth, volume, and dynamic variations in light and shadow to his abstractions. The exhibition will include Motel, 1956, a prime example of the artist’s initial transition from two- to three-dimensionality. Within a few years, the artist’s forms became increasingly experimental and chance-based, as in his constructions détruites, or “destroyed structures”—cardboard reliefs that he demolished and subsequently remodeled with papier-mâché, two examples of which, R60-10 and R60-21, both 1960, will be included.

Pivotal to the artist’s oeuvre was his shift in 1960 to the employment of white monochrome surfaces and geometric, grid-based compositions, represented in the exhibition by works including Relief, 1964; 48 Squares, 1965; 2 Richtingen Om en Om (2 Directions On and On), 1967; as well as R-70.28, 1970 (collection of The Museum of Modern Art, New York). The artist would go on to expand his production to larger serial reliefs such as R72-26, 1972, and R74-7, 1974, that reflect the apex of his production and his persistent fascination with the image-forming characteristics of light and shadow.

Concurrent and related to the production of his reliefs, Schoonhoven created a large number of works on paper including drawings in pen and ink as well as prints. Included here are iconic drawings such as Hatching in Four Directions, 1966; T71- 39, 1971; and a suite of five drawings from 1971 (collection of The Museum of Modern Art, New York), which, like his reliefs, are characterized by subtle marks or geometric units that are distributed evenly over the surface of a white page. These and other works on paper make clear Schoonhoven’s ongoing interest in the simple repetition of form and the nuanced play of light and dark.

The gallery’s presentation expands upon the exhibition, ZERO: Countdown to Tomorrow, 1950s–60s, on view at the Solomon R. Guggenheim Museum, New York, through January 7, 2015, which provides a window into Schoonhoven’s position as a seminal figure of the twentieth-century European avant garde.

On the occasion of the exhibition, David Zwirner Books will publish an extensive catalogue that will include new scholarship by Antoon Melissen, one of the foremost authorities on Schoonhoven’s work. Together with David Zwirner Director David Leiber, Melissen will lead a walkthrough of the gallery’s exhibition on January 9. Additionally, related to his writing on Schoonhoven, as well as to his scholarly contribution to the Guggenheim Museum’s ZERO show, Melissen will present his research at the forthcoming Guggenheim Museum program, ZEROgraphy: Mapping the ZERO network, 1957–67, on January 7. Please visit the museum’s website for more information.

Jan Schoonhoven was born in 1914 in Delft, the Netherlands, where he lived until his death in 1994. From 1932–36 he studied at the Royal Academy in The Hague. The artist was included in numerous important group exhibitions with the Netherlandish Informal Group, Nul Group, and the ZERO Group throughout the late 1950s and 1960s, including Zero-O-Nul at the Gemeentemuseum Den Haag, The Hague, in 1964, and Amsterdam, Paris, Düsseldorf at the Solomon R. Guggenheim Museum, New York, in 1972. He participated in documenta 4, Kassel, in 1968, and the IX Bienal de São Paulo, Brazil, in 1967, where he was awarded second prize. His work has been the subject of solo exhibitions at museums including the Gemeentemuseum Den Haag, The Hague, in 1967, and the Stedelijk Van Abbemuseum, Eindhoven, the Netherlands (1968, 1972, and 1973). Major surveys and retrospectives of the artist’s work have been held in international institutions: in 1972, Jan J. Schoonhoven traveled from the Städtisches Museum, Mönchengladbach, Germany, to the Westfälischer Kunstverein, Münster, and the Museum van Bommel van Dam, Venlo, the Netherlands; in 1985–86, Jan Schoonhoven Retrospektiv: Tekeningen en reliëfs traveled from the Gemeentemuseum Den Haag, The Hague, to the Kunsthalle Nürnberg, Nuremberg, and finally to the Badischer Kunstverein, Karlsruhe, Germany; and in 1995–96, Jan J. Schoonhoven – retrospektiv traveled from Museum Folkwang, Essen, to the Bonnefantenmuseum, Maastricht, and the Aargauer Kunsthaus, Aarau, Switzerland. In 1984, Schoonhoven received the prestigious David Röell prize for Dutch visual artists.