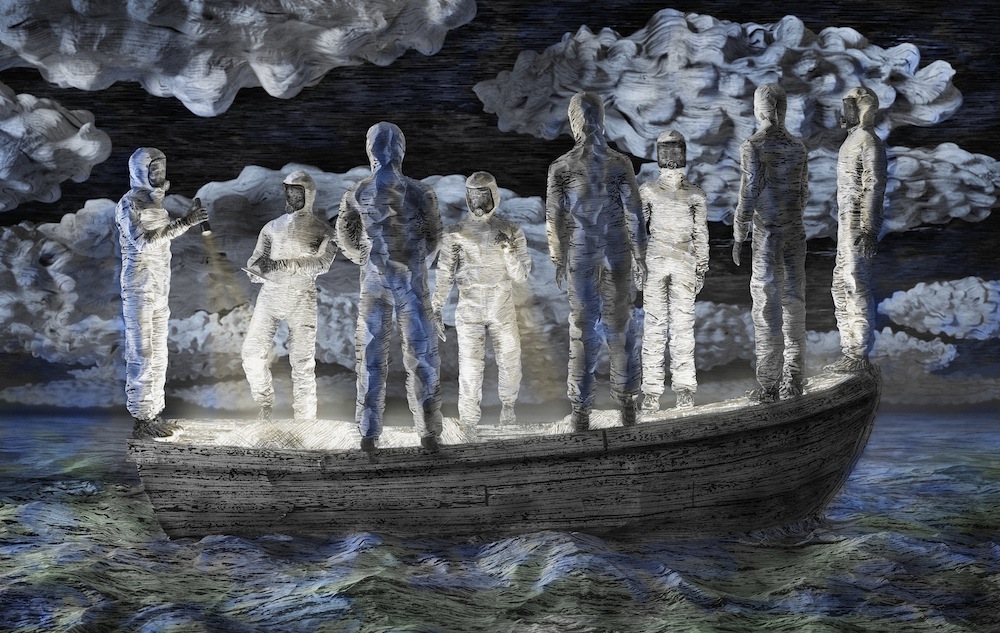 MKWBR is inspired by the true story of Christopher Knight, who disappeared into the remote woods of Maine for twenty-seven years. He avoided any contact with the outside world, having only a radio as his source of information. Knight’s imagination was untouched by visual media, and de Beijer tries to approximate this tabula rasa by relying on his own subjective perception of news events such as Chernobyl and Hurricane Katrina, avoiding his usual methodical research and instead using his memories to create an alternate version of reality.

De Beijer’s scenes contain varying degrees of slippage from our own, media-saturated memories. This distance pushes his work into the realm of folklore or archetype, feeling familiar yet not quite accurate, as if a child has drawn his dreams. In “2-28-1993”, which envisions the conflagration at Waco, TX, the trees are more Brothers Grimm than Texan, and the night sky captures the mix of precision and crudeness that perfectly captures a solitary person’s hyper-focus. The flames leap out in a cartoonishly menacing way, and the building itself is a vague symbol rather than a specific place.

Responding to Knight’s echo-chamber of only living in his imagination, de Beijer re-enacts his failure to live in the world as it is, or rather as it is represented, and tries, perhaps in vain, to steer us to a wistful place where we sit around a fire and envision tales told by poets and adventurers. Knowing that unlike Christopher we can never erase being sullied by visual saturation, de Beijer nonetheless points to the power of images that occur as much in our personal interpretation as in the iconic reiterations of our media-deluged era.

Born and based in Amsterdam, Jasper de Beijer graduated from the Amsterdam School of the Arts and participated in the Autonomous Design graduate program at the Utrecht School of the Arts. His solo exhibitions include The Hague Museum of Photography, the Museum of Contemporary Art, Denver, Museum Het Domein in Sittard (The Netherlands), Galerie Ron Mandos (Amsterdam), Gallery TZR-Kai Bruckner (Dusseldorf), Hamish Morisson Gallery (Berlin), the Empire Project (Istanbul) and Studio d’Arte Cannaviello (Milan). He is part of a large number of collections, including the Bank of America, the Gemeentemuseum (The Hague), and the Rabobank collection.