From June 6 until July 12, 2014 Jeroen Nelemans participates in the exhibition 'Dis/placement' in collaboration with THE MISSION at Aspect / Ratio Gallery.

Aspect/Ratio announces the continuation of ‘Dis/placement‘, a two-part collaboration with THE MISSION. Aspect/Ratio presents the second installment of the exchange, an exhibition featuring work by Jeroen Nelemans and Susan Giles, two Chicago-based artists from THE MISSION’s roster. Organized by THE MISSION at Aspect/Ratio, the show opens Friday, June 6 and continues through Saturday, July 12, 2014. 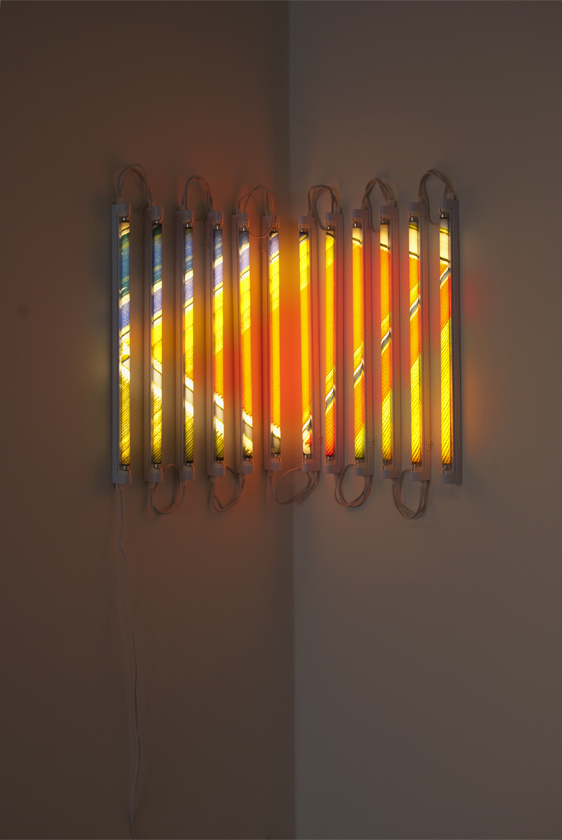 In the second iteration of ‘Dis/placement‘, THE MISSION couples single-channel video works with sculptures and light-based pieces by Giles and Nelemans, respectively. Two videos- one from each artist- provide the framework for the exhibition. Both videos are investigations of physicality and gesture, and each reveal shifting relationships involving placement, movement, sentiment, and perception. Susan Giles’ video, Pulling Out the Words, features five monologues that have been edited to omit the words, leaving only hand and arm gestures accompanied by breathing, stutters, ums, smiles or silence. In dialog with Giles, Nelemans presents Re-Manipulating the T-Bar, a video in which he appropriates footage of Bruce Nauman physically manipulating a T-Bar in his studio.

Continuing his ongoing investigation of the “lifespan” of an image, works involving light fixtures by Jeroen Nelemans are on view in Dis/placement. Also included are sculptures by Susan Giles. Giles’s paper sculptures integrate architectural structures built from fragments of multiple found patterns and explore the relationship between identity and place.

Jeroen Nelemans (b. 1974, Netherlands) received his BFA from Florida International University and received a Full Merit Scholarship to obtain his MFA from the School of the Art Institute of Chicago. His works have recently been exhibited at the Elmhurst Art Museum (Elmhurst, IL), the DelaCruz Collection Contemporary Space (Miami, FL), the Institute of Contemporary Art (Philadelphia, PA), and the Macedonian Museum of Contemporary Art (Greece). Nelemans lives and works in Chicago.