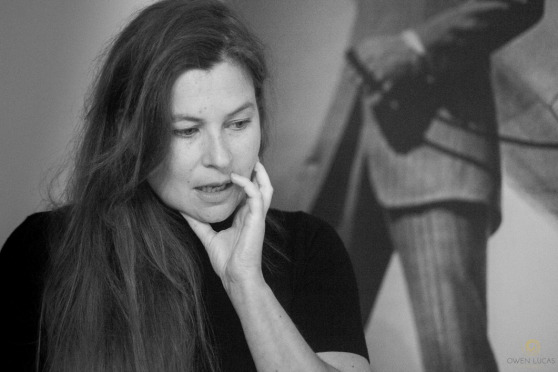 If you wan’t to see Jobina play and you’re not able to attend the Gala Dinner, you can see her play on Saturday 16th and Sunday 17th January in the foyer of the Marriott Marquis in New York. She will be improvising with field recordings, wildlife sounds and software instruments as part of the Vogue Knitting Live! ’16 event. Anyone can join in as she will be using prepared knitting needles to trigger sounds as a human-powered randomised sampler to recreate natural soundscapes. Come and see her in the demo area of the 5th floor foyer at the Marriott Marquis to perform. Or just come to listen. Free entry.

Jobina Tinnemans is a contemporary composer working in crossover disciplines of electronics, classical music and contemporary art. She incorporates analogue and digital, lo-fi and high-­end techniques as well as non-musicians and ancient crafts. All possible ways to express the sounds she hears in nature, from the smallest micro-texture of rustling grasses to the dramatic sounds of the weather.
Page turning, knitters, hedge trimmers, kung fu and Shakespeare all have featured in her compositions. She was selected out of more than 600 submissions to compose contemporary classical composition with electronics for the 2013 edition of the MATA festival in New York, founded by Philip Glass, Eleonor Sandresky and Lisa Bielawa, resulting in the innovative piece Killing Time. Jobina’s highly acclaimed piece ‘Shakespeare and Hedgeshear’, involving two table tennis teams and hedge trimmers, was selected to represent the British section of the ISCM World Music Days 2014 in Poland. Her newest triptych of pieces Turner Piece/ Apartment House/ Metro , commissioned by Sound And Music for the Apartment House ensemble, ingeniously feature the sound of the paper scores being turned as an integral part of the music, adding to and enriching the sounds of classical instruments and electronics.

Killing Time explores Tinnemans’ fascination with the timeless natural sounds of her adopted home of Pembrokeshire, recreated through the innovative use of performing knitters who will be generating a soundscape to invoke in the listener the atmosphere of the majestic scenery of this remote yet beautiful corner of the Welsh countryside. The knitting ensemble perform on custom developed prepared knitting needles which each trigger tiny snippets of sound. Together, these sound snippets recreate the wild sounds of Nature in a far more immersive and evocative manner than a mere field recording ever could. The non-musical knitters are an integral part of the orchestra along with classical instruments and Tinnemans herself performing on electronic instruments. Every concert the performing knitters make additions to the knitted “score” which are a living document of the history of the piece, visualising the passage of time through its trace in fibre.

“I often include non musicians to be part of my ensemble, who, by their activity, create a rhythm or sound secondary to their action, for the particular timing it generates. I currently live in Pembrokeshire and for this work I approached its majestic coastal soundscape as an education in timing of my music. In order to keep the timing of a field recording alive and natural – since it’s a document, much like a photograph is – I dissected the recording of a flock of arctic terns into single calls and turned them into a software instrument to be live reconstructed again, back into a flock of birds, at the MATA concert in New York. The sound segments needed to be triggered in a nonlinear way and I used 5 knitters knitting with prepared knitting needles to act as a cloud-like sequencing sampler. Which resulted in the electronics part of the piece being conducted. Performed by members of an ensemble consisting of both conventional instruments and knitters. Similar to a conventional instrument, the audience witnessed a physical presence of an electronic sound by it’s performer.” – Jobina Tinnemans