Jochem le Cointre in an evening of exhilarating new music 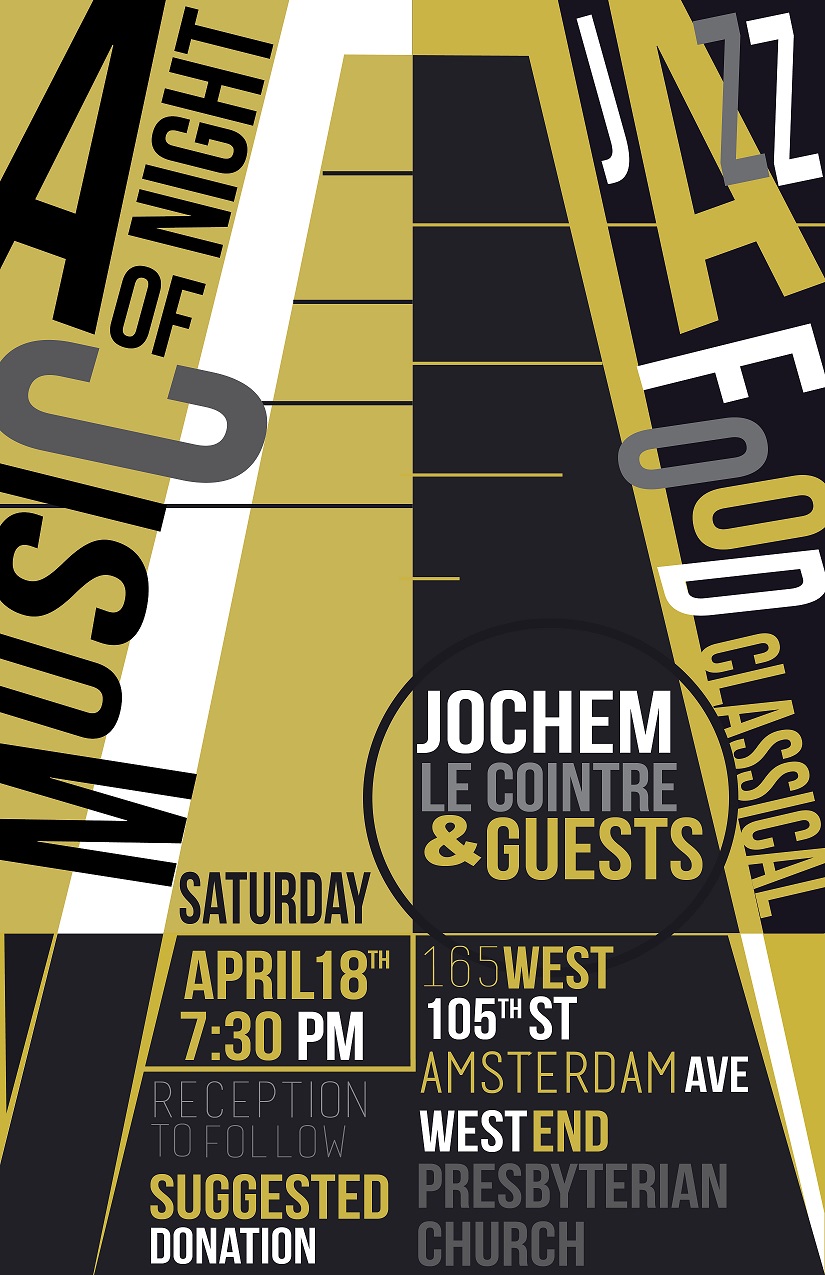 Jochem le Cointre and fellow artists exploring the jazz and classical worlds of sound, performed by a group of virtuoso musicians and artists, Saturday, April 18th at 7:30 PM at the Main Concert Hall located in the West End Presbyterian Church

Jochem le Cointre’s compositions, an emerging composer, has been described having an “unmistakable sound which is the mark of a talent to watch for” by Ronn Yedidia. Join Jochem le Cointre and fellow artists, Anat Almani, Adrian Daurov, Kyle Poole, Daryl Johns, Bryan Qu, Matt Bumgardner, Jasper Dutz, Cody Rowlands, and Nicholas Greenberg, for an evening of exhilarating new music exploring the jazz and classical worlds of sound, performed by a group of virtuoso musicians and artists, Saturday, April 18th at 7:30 PM at the Main Concert Hall located in the West End Presbyterian Church located at 165 W. 105th St. at Amsterdam avenue inside West End Presbyterian Church.

Jochem le Cointre is a young jazz and classical pianist and composer based in New York City, performing frequently at Smalls Jazz Club, Madison Square Garden, and Monk Winter Garden Festival and many others. Originally from Leeuwarden, Netherlands, he received his musical education from an early age in classical and jazz piano performance. In 2006 and 2008 he won prizes at the national jazz competition (Princess Christina Concours) and he partook in summer schools in Rotterdam. In 2009 he reached the finals of the Dutch Wind Ensemble composer’s competition with his piece ‘The Night without You’. At the New School Summer program in Italy, 2011, he was selected as one of the top students and was awarded a scholarship for the New School jazz program. Le Cointre has studied with jazz greats like Reggie Workman, Hal Garper, Don Friedman and studied orchestration and chamber music performance at Mannes College.

The concert will feature the notable Anat Almani and Adrian Daurov. Anat Almani made her Carnegie Hall debut at the age of sixteen under the baton of Alexander Schneider. Almani has been heard on New York radio on the McGraw Hill Young Artists Showcase hosted by Robert Sherman. In addition to her teaching at the Manhattan School of Music Precollege Division, she is an artist faculty member of the Academy of Music Festival. She has taught in Siena, Italy and presented master classes in Argentina and in Israel.
Adrian Daurov is a versatile cellist, who performs on world-famous concert stages including Carnegie Hall, Avery Fisher Hall, St. Petersburg Philharmonic, Madison Square Garden. After studying at the St. Petersburg Conservatory in Russia, Adrian received the Jerome L. Greene Scholarship to study at the Juilliard School with the renowned cello pedagogues Andre Emelianoff and David Soyer (of the Guarneri Quartet) where he completed his Bachelor’s and Master’s degrees in 2009. Also performing in the concert are Kyle Poole, Daryl Johns, Bryan Qu, Matt Bumgardner, Jasper Dutz, Cody Rowlands, and Nicholas Greenberg.