Although he has not even graduated yet, Jochem le Cointre will already present his first production "Steppenwolf: A Musical Retelling" at the New School's Johnson/Kaplan Hall on May 11 and May 12.

Although he has not even graduated yet, Jochem le Cointre will already present his first production “Steppenwolf: A Musical Retelling” at the New School’s Johnson/Kaplan Hall on May 11 and May 12.

During his final year at the New School, le Cointre has been independently writing and producing this ambitious art project: the first ever staged adaptation of Hermann Hesse’s classic novel, “Steppenwolf.” It will be a musical drama with an original libretto and score by the producer, composer, and New School student.

“Steppenwolf: A Musical Retelling” is the story of a middle­aged author, Harry Haller, who finds himself lost in the world and on the brink of suicide. One night, as he wanders through deserted streets, he notices a strange sign on a wall: “Entrance to Magic Theater.” This curious finding triggers a journey of self­discovery, music, love, dance, sex, war, despair, and humor. Neither the story of a madman nor the saga of a depressed artist, it is “the tale of us all”—a modern myth about the tragic and comic forces of life. 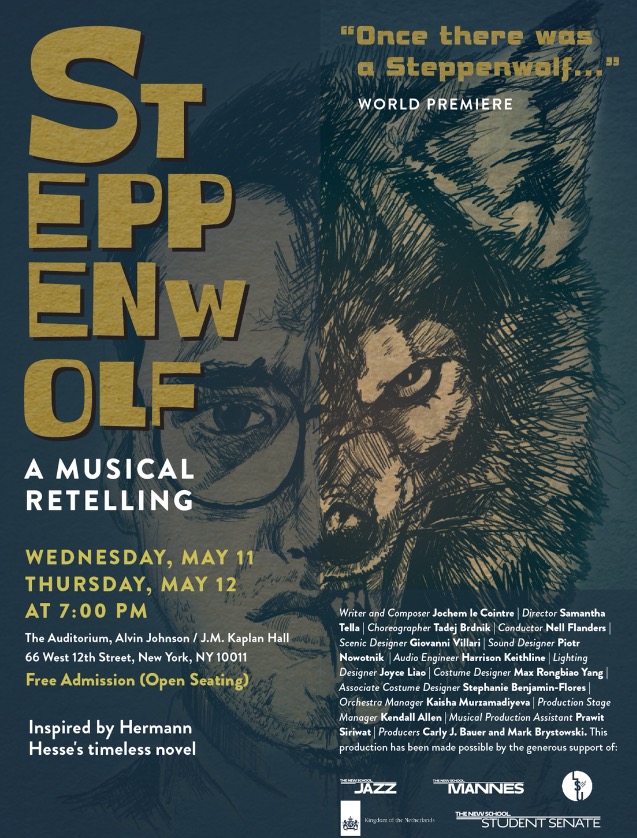 “I discovered the works of Hermann Hesse in the summer after my first year in college and experienced a magical feeling – that I was reading about my inner soul,” says le Cointre. “When I decided to merge music with theatre, Steppenwolf became a major inspiration: it revealed all the struggles of modern times, today’s art, and how we deal with our Self and the world. Hesse’s themes have throughout the decades resonated with minds who searched for true meaning and true freedom. ” Many believe that’s the reason it proved so popular and influential to the Hippie Generation, who created the so-called Hesse Boom in the Sixties.

The musical drama reflects the Faustian struggle of an intellectual in a world he doesn’t comprehend. It is the story of an individual’s search for true meaning and self-realization with only one purpose: to regain access to the ‘Garden of Eden,’ a place where happiness and freedom give way to new chances of playing the game of life.

Le Cointre’s score calls for a 15 ­piece chamber orchestra and draws on influences from both classical and jazz idioms. This world premiere show will be performed by a chamber ensemble of students from The New School’s College of Performing Arts, a cast of actors and singers from The New School’s Mannes School of Music, School of Drama, and Lang Theater, and dancers from the renowned Martha Graham Dance Company. Choreography is by Tadej Brdnik, the former principal dancer of the Martha Graham Dance Company.

Get your free tickets here, and RSVP to the Facebook event here.

Jochem le Cointre is a young jazz and classical pianist and composer based in New York City, performing frequently at Smalls Jazz Club, Madison Square Garden, and Monk Winter Garden Festival and many others. Originally from Leeuwarden, Netherlands, he received his musical education from an early age in classical and jazz piano performance. In 2006 and 2008, he won prizes at the national jazz competition (Princess Christina Concours) and he partook in summer schools in Rotterdam. In 2009, he reached the finals of the Dutch Wind Ensemble composer’s competition with his piece ‘The Night without You.’ At the New School Summer program in Italy (2011) he was selected as one of the top students, and awarded a scholarship for the New School jazz program in New York. Le Cointre has studied with jazz greats like Reggie Workman, Hal Garper, Don Friedman, and took courses in orchestration and chamber music performance at Mannes College.