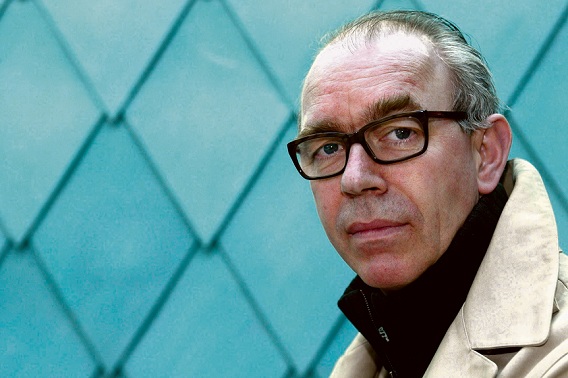 Saturday April 5, 2pm, ‘Drinking Ink: Joost Swarte and Art Spiegelman in Conversation‘ will take place. Swarte and Spiegelman have a long association, dating back to the earliest days of Spiegelman and Françoise Mouly’s RAW Magazine, to which Swarte was a frequent contributor. Both artists have distinguished themselves with artwork both witty and profound, both have produced expressive comics and striking single images, and both have worked in multiple media including architecture and performance. Together, the pair will discuss their careers, their shared histories, comics and more in a conversation moderated by Bill Kartalopoulos. (90 minutes)

Joost Swarte (born in Heemstede, 1947) start to draw comics at the end of the 1960’s, while studying industrial design. In 1970 he published his first comic book, and from 1971 on he worked for the famous Dutch comic magazine TANTE LENY PRESENTEERT (AUNT LENY PRESENTS). By the end of the 1970’s he was drawing cover designs for the book section of the Dutch magazine VRIJ NEDERLAND and covers for the Belgium magazine HUMO and THE NEW YORKER. With the comic series DR BEN CINE & D (later called: NIET ZO! MAAR ZO!) in VRIJ NEDERLAND, he rose to national fame. In 1980 he took part in the international comic show SALON INTERNATIONAL DE LA BANDE DESSINEE in Angouleme (France) for the first time. From then on he got international recognition, and his comic books were translated into English, French, German, Spanish, Catalonian and Italian.

Halfway through the 1980’s he changed from drawing mainly comics to illustrating and graphic art. He also started designing posters, stamps, letters (typography), furniture, objects and even buildings. In 1996 he presented a plan for a new construction of the Toneelschuur, a theatre in his residence, Haarlem. He is also a music lover, and he produced CD’s with singer Fay Lovsky (JOPO IN MONO, 1991), and with Arling & Cameron (SOUND SHOPPING, 1998), winners of the Dutch Popprize 2000. Joost Swarte is a true promoter of comics. In 1990 he initiated the STRIPDAGEN, a biennial international comic event, that took place for the first time in 1992 in Haarlem, Holland.