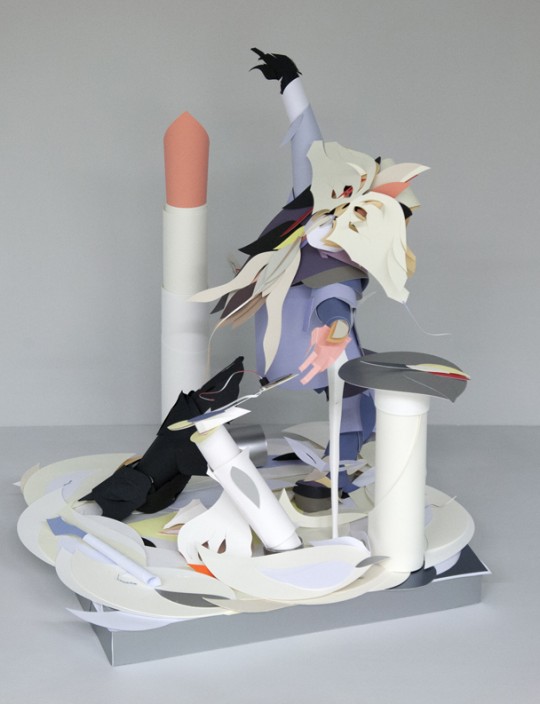 AMBACH & RICE presents a solo exhibition by Karen Sargsyan from January 18 until February 15, 2014

AMBACH & RICE is pleased to present the small stories, a solo exhibition of new sculptures by Karen Sargsyan. The exhibition will run from January 18 until February 15, 2014, with an opening reception on Saturday, January 18, 2014, 6-8pm.

This exhibition lies in contrast to Sargsyan’s two previous large-scale installations at the gallery by introducing intimately scaled vignettes that take up politics, religion and mythology with ecstatic pathos and humor.

Sargsyan’s layered paper figurations aim to capture protagonists in the midst of turmoil. Their pained expressions and restless postures allude to tragedy as a portal to transformation.  The artist contends that one’s “true nature” is only fully revealed in a state of distress.  The arousal of empathy for the human condition is triggered in these personages, which writhe like trees shedding their leaves. A desire for emancipation and reinvention throbs at the surface of their layered limbs and masks.

Alternately lucid and enigmatic, Sargsyan’s installations probe shtick and classicism equally like a roadside Edwardian production.  Moses and Pale Orange Lipstick epitomizes this tension with its opposition of Russian anti-gay legislation by deftly mingling politics, religion and capitalism. the small stories is a testament to Sargsyan’s faith in art’s ability to draw awareness to the oppressed and the marginalized. His distinct brand of comic tragedy continues to challenge notions of identity and power with surprising and unsettling results.