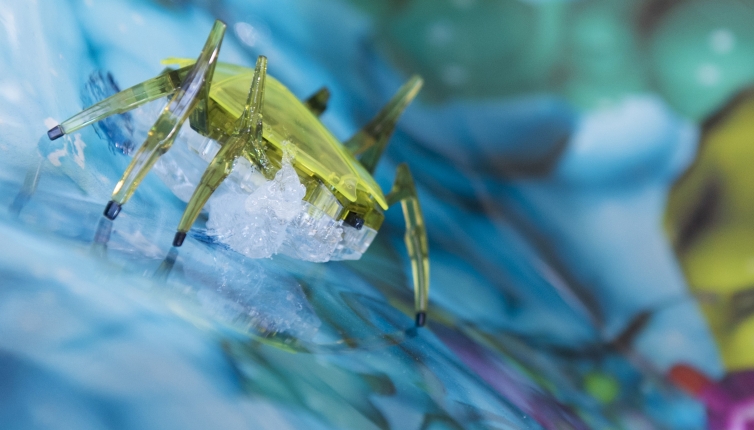 From November 18 until January 7, Amsterdam-based Katja Novitskova presents new works at  the Greene Naftali Gallery in her first US solo exhibition ‘Approximation (Storm Time)’. Culling from myriad sources online, Novitskova mines the Internet for images and data visualisations, often specific to scientific research and elusive to the eye. Levelling the anthropologically familiar with speculative projections of the future, she aims to synthesise retinal sight with that of machinic imaging. Rather than depicting the observable environment, Novitskova assembles various visual incarnations of data, which are collected by an immense number of sensors and cameras at the frontiers of human knowledge of the world. According to Novitskova, “today any image can serve as an informational diagram of something else, a triggering pattern, a dataset to be mined. The storm of data is brewing.” In the process of mapping this storm, life becomes mutated and augmented, as one organism’s body is channelled toward developing the future of another.

For her exhibition at Greene Naftali, Novitskova orchestrates an immersive environment in which nonhuman animal forms coalesce with machines. Novitskova’s aluminium dibond panels, native to advertising displays, depict model organisms like the roundworm, fruit fly, and yeast, species widely used in scientific research for their genetic commonalities with humans. Captured as enlarged microscopic photographs and computer generated renderings, the image-derived sculptures resemble a synthetic landscape, standing like vegetation throughout the space. Navigating this landscape are three apes, shot by an infrared camera in a light spectrum inaccessible to the human eye. The two largest aluminium panels in the show resemble oversized, slippery pink boulders. They are in fact images of protein structures, one from the single cell yeast species, the other from the human body, on which a fruit fly and a roundworm are superimposed. In the rear gallery, robotic sculptures are stationed on aluminium trusses. Their bodies, gently swaying amid soothing sounds, are comprised of re-purposed electronic baby swings with patterned resin diaphragms for a cradle. Unlike their commercial counterpart, these have laser eyes that pierce through the space, quietly mapping their surroundings. Novitskova’s appropriation of white noise machines and baby swings, strange technological proxies for the comfort of the womb, both underline the nascency of machine consciousness, while also orchestrating an eerie prenatal environment inhabited by mutant forms.

Katja Novitskova lives and works in Amsterdam and Berlin. She will represent Estonia at the 57th Venice Biennale in 2017. Her work is also included at the Okayama Art Summit 2016. Recent solo exhibitions include Kunstverein Hamburg, Hamburg (2016), Kunsthalle Lisbon (2015), Salts, Basel (2014), and CCS Bard, Annandale-on-Hudson (2012). She has recently exhibited in group exhibitions at MoMA, New York (2015), the 13th Biennale de Lyon (2015), Kunsthalle Wien (2015), and Astrup Fearnley Museum, Oslo (2014). She was shortlisted for the 2016 Nam June Paik, Folkwang Museum, Essen, Germany.