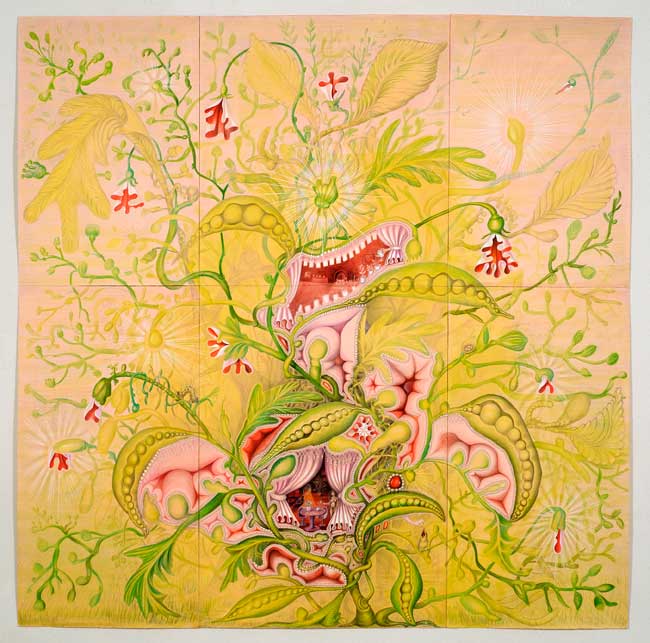 Feature Inc. ends 2013 with the flower and her inner focus, recent works on paper by Kinke Kooi, and an Upfront project by Ned Snider. Text, narrative, and line are the elements that brought together the two exhibitions, which opened on 21 November and continues through 22 December 2013.

During an opening-day discussion between Kinke Kooi and Hudson, the artist said:
“For me, in a strange way, decoration has to do with making connections. That’s why I fill in spaces in between: to dissolve opposition. To be overwhelmed by nature is to dissolve into a bigger whole. It is an inclusive situation, which for me is the same as a domestic situation.

Inviting strangers into your house can create complications. It is the same with ideas: to be open to new information also creates complications. I have always been suspicious of purity. Purity discriminates. Purity is about exclusion rather than inclusion. When one is open to guests and new ideas, it interrupts one’s autonomy. I like that thought. I want to promote hospitality.

I don’t think anybody is entirely male or entirely female. Maybe that is why I like gradients—one thing bleeding into another thing. When I was young I sometimes felt more like a male; when I had my children I became more female. Now, with menopause, I am more male again. I love this element of change.

I believe things should be allowed to mix. After I had my daughter I became more interested than ever in the images that she would see in her lifetime. I was shocked by how one-dimensional images of women still are in our culture. I call that visual loneliness. I think femininity still deserves and needs to be visualized from more perspectives. I would like to fill in these gaps in our visual information.”

Kinke Kooi was born in 1961 in Leeuwarden, Netherlands, and attended the Academy for the Visual Arts in Arnhem, where she still lives with her husband and two children. Kooi has participated in group exhibitions at the Museum of Modern Art in Arnhem, Mills College Art Museum in Oakland, California, the Yerba Buena Center for the Arts in San Francisco, and the Aldrich Museum of Contemporary Art in Ridgefield, Connecticut, among other venues. Her work was recently on view as part of “Contemporary Surrealist Drawings from Rotterdam: The Collection of the Museum Boijmans Van Beunigen” at the Institut Néerlandais, Paris. Kinke Kooi began exhibiting with Feature Inc. in 1999. This is her fifth solo exhibition at the gallery.