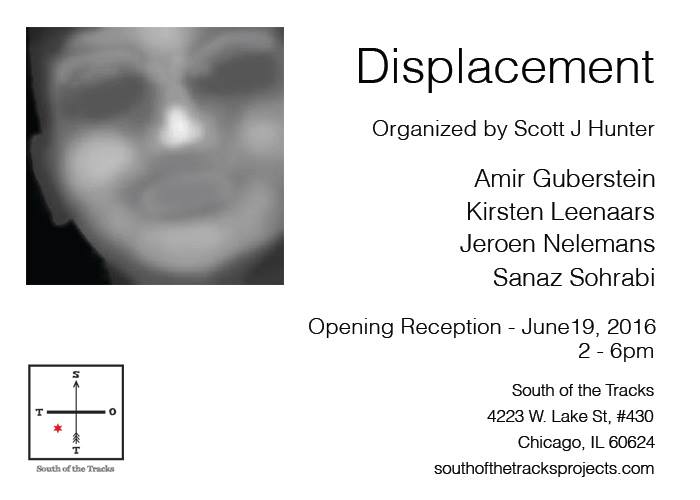 From June 19th until July 17th, Dutch artists Kirsten Leenaars and Jeroen Nelemans will be featured in "Displacement" at South of the Tracks in Chicago, IL.

Through July 17th, Dutch artists Kirsten Leenaars and Jeroen Nelemans will be featured in “Displacement” at South of the Tracks in Chicago, IL. This group exhibition is organized by independent curator Scott J. Hunter, and also includes works by Sanaz Shorabi, and Amir Guberstein.

What is home?
Perhaps a place, a setting, an abode, a country, a religion, a political viewpoint, a time in one’s history, an emotional touchstone, a representation of self.

To come home.
But where does home originate? And how does one construct home, physically? Psychologically?

To feel at home.
Yet, where is that emotional response, that understanding of place and self within it, localized? How is it accessed? Maintained? Sustained? Modified?

To be home.
To see oneself as situated, within a domestic space, or a land of one’s identity, where there is perhaps comfort in the understanding that this is a place to be oneself.

These are all statements we make regarding what is often considered a representation of home. A space, person, setting, community, family, country, origin, land, or a moment of time, where there is expected to be a feeling of personal, situational, and physical safety. Where there is a secure foundation for the awareness of self. Where one can readily have a space that sits at the center, a site of identification, with being a person, and identifying what is most required to allow that to unfold. Where one is provided the ability to just be.

But what if what one has come to consider home is not a place of safety? That there is no setting where one feels secure? What then becomes home, if that understanding of place and self, is altered, distorted, removed, or disappears? How then does one find equilibrium?

This exhibition is an exploration of that sense of displacement that occurs when home is altered, and of the redefinition that takes place as a result. The works contained in this project consider how community can be retained, reconstructed, or altered, both physically and psychologically. And how one is able to determine and define self within that experience of loss that occurs with displacement; how one reconsiders what has been perhaps most consistent in identity, a setting where security and safety were once perceived to exist, if even just as an illusion. To determine how, with movement and reexamination of self, there can be a new memory of place, which is able to foster and expand what can be known as home.

Kirsten Leenaars (b. 1976, Netherlands) is a multidisciplinary artist residing in Chicago and a faculty member at the School of the Art Institute Chicago. She received her BFA from Gerrit Rietveld Academie in Amsterdam, a MA in Fine Arts from the Piet Zwart Institute’s Post Graduate Program in Rotterdam, connected with Plymouth University in the UK, and a MFA from University of Illinois at Chicago. Leenaars has shown alone and in group exhibitions through the United States, Mexico, Europe, and Turkey, including most recently at the Museum of Contemporary Art in Chicago.

Jeroen Nelemans (b. 1974, Netherlands) is a multidisciplinary artist living in Chicago. Nelemans obtained his BFA from Florida International University in Miami and a MFA in Fibers from the School of the Art Institute of Chicago. Nelemans is represented by The Mission, Chicago, and has had solo and group exhibitions of his work across the United States and Europe, including the Elmhurst Art Museum, the Institute for Contemporary Art in Philadelphia, and the De La Cruz Collection in Miami.

About South of the Tracks

South of the Tracks is a studio gallery in Chicago, IL, that is run by Alex Tam, a Bachelor of Fine Arts graduate from Columbia College. The gallery is located in the outer rooms of a Garfield Park studio that Tam shares with fellow Columbia graduate Colin Hatch. ArtSlant Chicago’s James Pepper Kelly visited Caroline Gohlke’s solo exhibition “Greetings From Under the Table,” and wrote: “The show is messy. And young. And, perhaps because it is so unpolished, genuinely exciting. . . So try this: instead of checking off the list of regulars, do a little research. Find a small art space in your neighborhood. Go to it. See art. And expect to end up somewhere else, someone else, restored.”