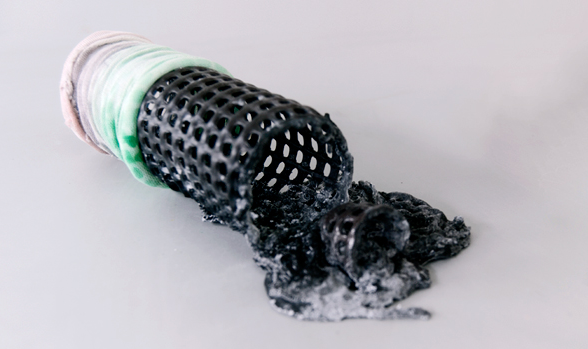 Dutch artists Kok&Deiman investigate the remarkable function of the model by dragging it out of context and reinterpreting its visual language. Their work mimics, magnifies and re-creates different examples in order to comment on how we simplify and schematize wholly complex and often unpredictable systems.

In Coupling Series, the duo tease out the graphical representation of nature found within common garden system models in order to create a playful and ambiguous playground. From perfected depictions of colorful mud to 3d models of growing plants to an absurdly abstract instruction video, the installation comments on utopian ideas of DIY, manipulability, knowledge visualization, and a misplaced sense of control.

The work of Kok&Deiman, the collaboration of Tom Kok (b. 1987) and Jan-Willem Deiman (b. 1986), consists of several investigations into models, diagrams and other representational media. Both artists live and work in Utrecht, The Netherlands. Exhibitions of their collaborative work include Van Abbemuseum, Eindhoven; NP3, Groningen (Netherlands); Galerie Fortlaan 17, Ghent (Belgium); Museum of contemporary Art, Skopje (Macedonia); Art Rotterdam (Netherlands); GEH8 Kunstraum, Dresden (Germany).