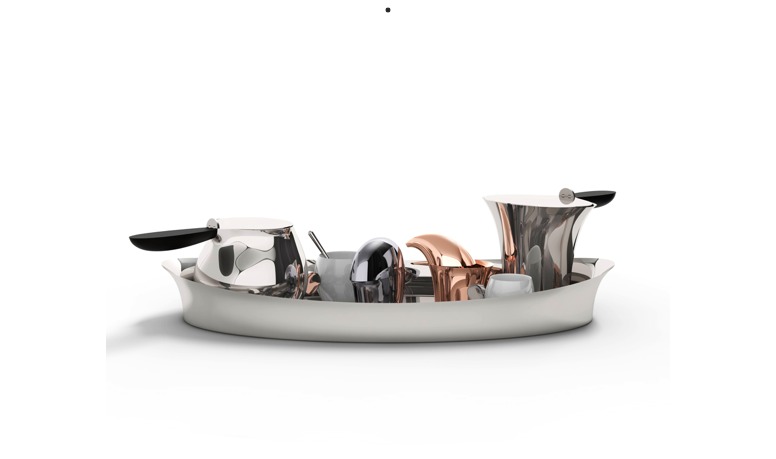 On November 12th, Atelier Courbet will host the launch of the Coffee and Tea set that Aldo Bakker designed for Puiforcat.

Atelier Courbet is pleased to present its fall exhibition, “Puiforcat: 200 Years of Silversmithery”, featuring sought-after works culled from the venerable French silversmith’s workshop. Opening November 12th, a collection of heritage pieces spanning Puiforcat’s legacy of craftsmanship and avant-garde silverwork, will be on display at New York Master-Craftmen’s Gallery, Atelier Courbet. The exhibition will also unveil Fluidite, a Coffee and Tea set by Dutch design artist, Aldo Bakker. The new set is characteristic of both Jean Puiforcat and Aldo Bakker’s creations in that purity of form transcends and invites contemplation.

“The challenge for me was to create objects that linked to each other by one design principle: the interaction between two parts”, explains Bakker. “Each product needed to express this principle in its own way, but I wanted to avoid a repetition of shapes.”

Additional highlights include a backgammon set, created in the spirit of Jean Puiforcat’s 1927 chess set, a 1925 handmade Art Deco lamp and several other tea and coffee sets in the true Puiforcat Art Deco style.

The approach of Aldo Bakker (Amersfoort, NL 1971) is driven by exploring borders between humanity and inhuman aspects in design, a hand drawn, and architectural exploration into endlessness. With regards to this subject, it is no coincidence that Aldo chose glass as his starting material to express himself with: glass has a certain ‘inhuman’ aspect, it is the ideal material to produce shapes which seem almost perfect and artificial, a way for Aldo to ‘drift away’ from an obvious visible human touch.

Before designing in glass, Aldo skilled himself in the crafts of jewelry design, the occupation of both his parents. For years, Aldo was the only employee of Atelier Noyons in Utrecht. It was jewelry design that formed Aldo’s professional patience and shaped the perfectionism which can be found in his work until today. After studying almost every possible side to the production of glass and after realizing his first complete glass line, Aldo returned to wood and the creation of wooden furniture.

Aldo held his first large exhibitions, starting with his first overview at the Amsterdam Gallery ‘Binnen’. Followed by Solo presentations in Milan and London. During the London exhibition he met Ilse Crawford, head teacher of the department ‘Well being’ at the famous Design Academy Eindhoven, which meant the lift off of Aldo’s career as a teacher at the academy.

The design of the ‘Urushi series’ form a new milestone in Aldo’s work. Still, for insiders, the relationship between his first glasswork designs and the Urushi series is evident. This series presents the full complexity of Aldo’s working methods.

For Aldo, the Urushi series form a new beginning as well as an end. Aldo aims to evoke interaction with multiple senses with his outspoken love for materials and his never-ending determination to understand various craftsmanship’s. Due to his urge for perfection, his objects lack a typical ‘handmade’ impression, even contrarily. The almost endless process of their realization gives his designs a sense of ‘inhuman’ belonging, questioning their own existence.