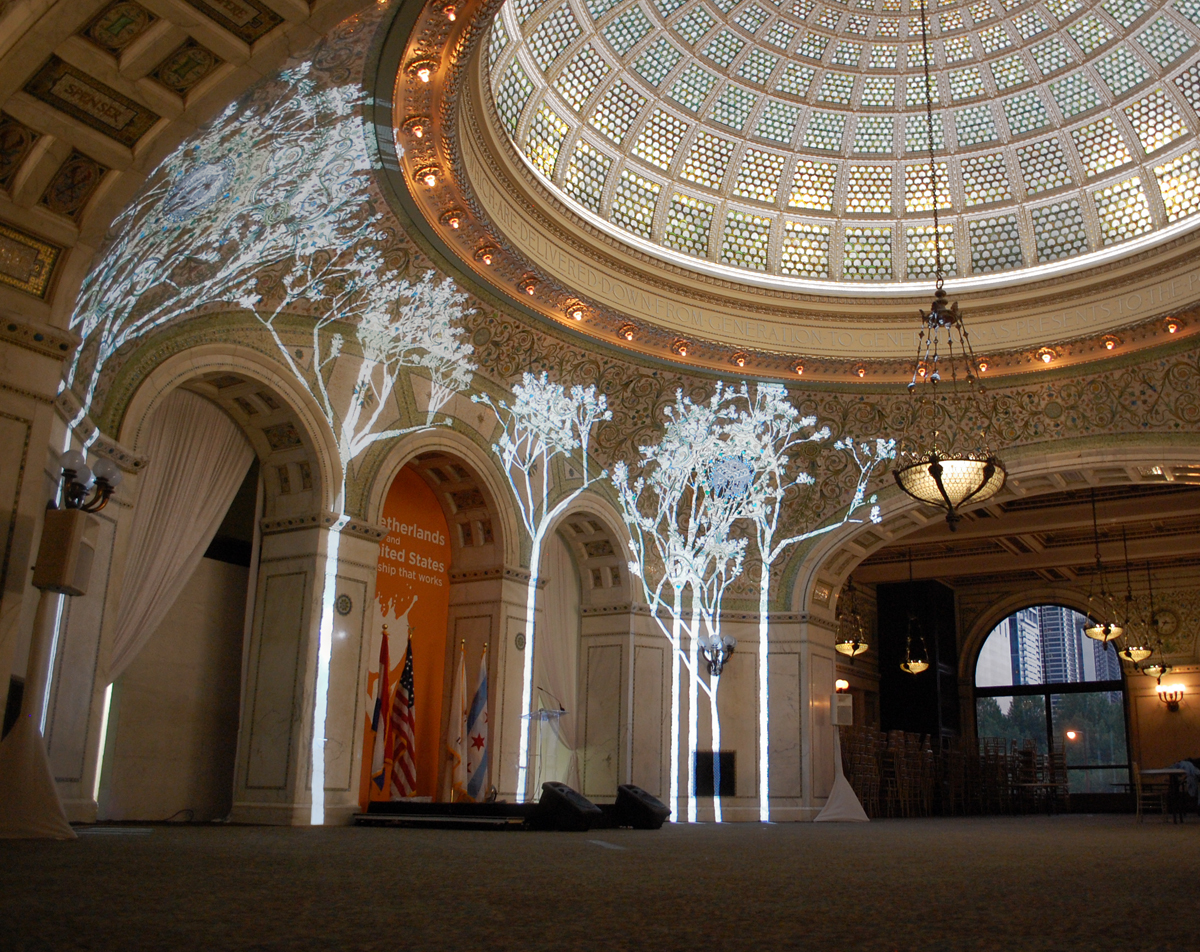 His Majesty King Willem-Alexander and Her Majesty Queen Máxima of the Netherlands will have dinner with Dutch-American business leaders co-hosted by The Chicago Council on Global Affairs on June 2.

His Majesty King Willem-Alexander and Her Majesty Queen Máxima of the Netherlands will have dinner with Dutch-American business leaders co-hosted by The Chicago Council on Global Affairs on June 2.

The dinner is an important part of the first official visit of the King and Queen to the United States, focused on celebrating the strong economic ties between the Netherlands and the United States.

During the dinner, an installation by Dutch artist Simon Heijdens, “Lightweeds,” will overgrow the dome-shaped Preston Bradley Hall.

Lightweeds is a living digital organism, through which an indoor space regains the unplanned natural timeline that its walls exclude.

Plant species that are generated by externally measured conditions; they grow up and live directly depending on actual sunlight and precipitation, and sway along real-time wind gusts, choreographed by the live data stream of sensors placed outside the building. Artificial plants that reveal real nature, as they translate the ever-changing condition of the outdoor to the otherwise static built environment.

When people pass the plants, they tremble, trace the path of passage, and eventually lose their seeds to pollinate to other walls throughout the building, making up a constantly evolving ecosystem that traces and reveals the character of the use of the space.

From his Dutch background, Heijdens’ work looks to counter the perpetual character of the manmade, and adds layers to the built environment to open it up and reveal the character of its use. “Nature is becoming rare in our daily life. In the way our urbanising world is generally built and planned, our everyday surroundings have become perpetual and static through the likes of conditioned climates and 24 hour lighting. When unpredictable natural elements such as a lifting breeze, a sudden shower, or a setting sun are planned out of our surroundings, the timeline of the everyday is lost.”

Contrasting his work with static hardness of the built world, he explores uncontrollable processes, and uses coincidental interactions to create connections. He reclaims these values. “The hard and static surface of the architecture is softened to become evolutionary and legible again, to make the built environment that surrounds us reveal the character of its place and use.”

Simon Heijdens (b.1978. Breda, The Netherlands)

Simon Heijdens’ site-specific installations are merging the narrative and the tangible, and explore the concept of coincidence to trace and reveal the hidden essence and character of the spaces that surround us in everyday life.

‘A marriage of intricate technology and natural processes’ such as his acclaimed projection works ‘Tree’ and ‘Lightweeds’ (site-responsive light projection) which have been exhibited and installed in over 50 public spaces, museums and galleries throughout Europe, the US, the Middle East and Asia, including a one year exhibition of a three wall projection at the Permanent Collection galleries of the Museum of Modern Art New York in 2014/2015.

Commissions include Art Basel/Miami 2013 (the Perrier Jouet commission), Swarovski Crystal Palace 2006, Droog, Wallpaper Handmade and Contrasts Gallery Shanghai. Founded in Rotterdam, The Netherlands in 2002, his studio has been based in London, UK since 2005, where he lectured at the Royal College of Art from 2005 to 2010.