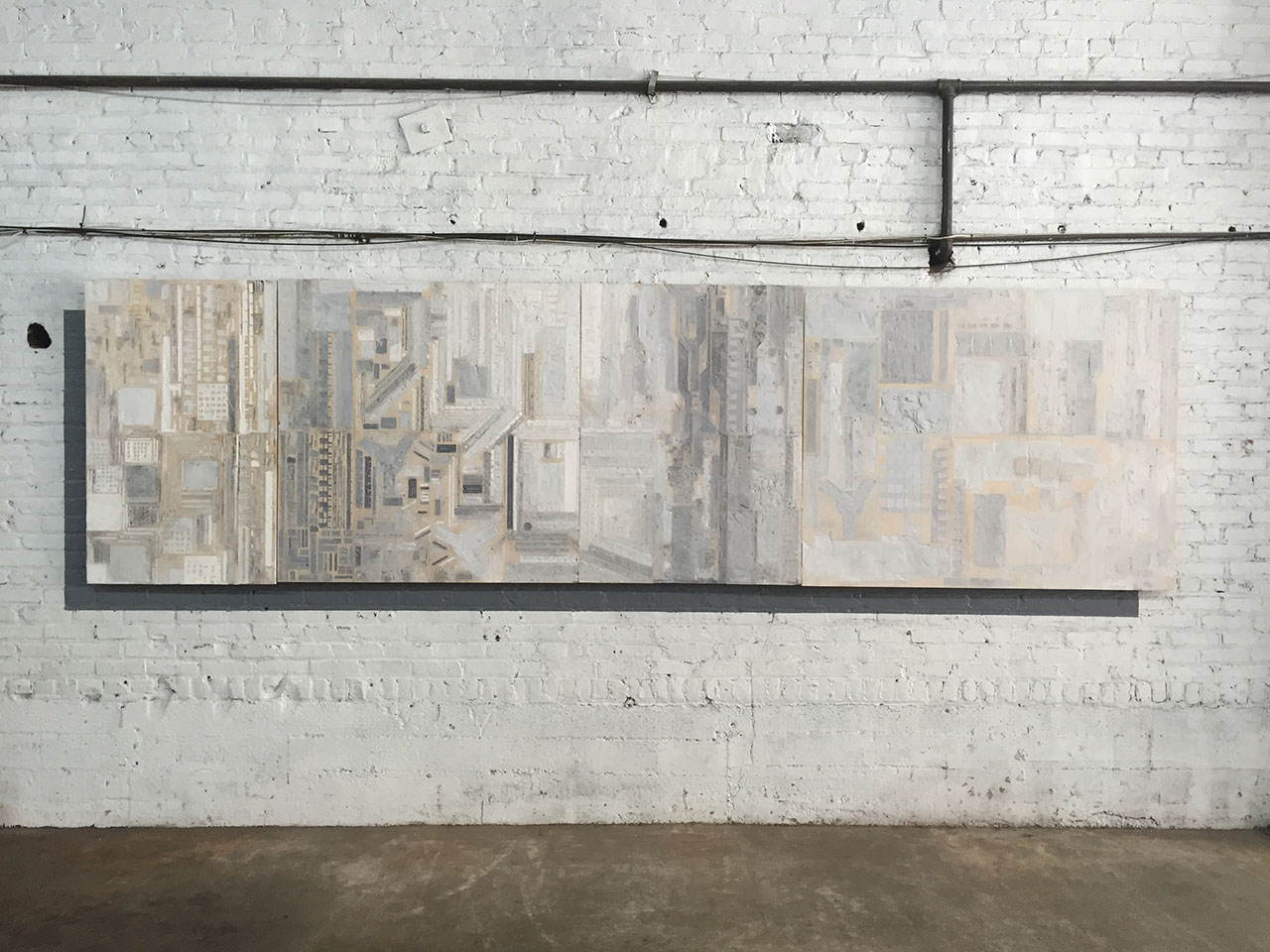 Space Available is an exhibition of large scale abstract painting and sculpture at 1329 Willoughby Ave. in Bushwick, Brooklyn. The exhibition was organized by Paul Corio and Rob De Oude and runs from June 5-28 where, among others, work of Dutch artists Lilian Kreutzberger and Rob de Oude can be seen.

Scale is one of the great bugbears in contemporary art, both practically and theoretically. This is especially true in New York City in the 21st century, where space is an incredibly precious commodity. Space Available, the siren song advertising phrase of New York City real estate, takes the intersection of size and scale as its most basic premise. Moving in to the post-modern era in the 60s, the drive to make large-scale work began to be viewed with great suspicion. Up to this point, ambitious artists had traditionally dreamt of seeing their work on a monumental scale (think of the Sistine Chapel) and for centuries it was viewed as a natural impulse. By 1968, all institutions of power all over the world were being asked to answer hard questions about their legitimacy and themechanisms via which they maintained the appearance, and perhaps the illusion, of that legitimacy. Art  institutions were not spared in this tidal wave of critique, which was sometimes played out in the streets in dramatic fashion: Civil Rights, Vietnam, the Sorbonne.

It became increasingly difficult not to notice that the overwhelming majority of art viewed as important was made by middle-aged white males, and that that power group chose large-scale painting as their central mode of  expression. The medium itself became damned by association, even though nothing in the facture or figuration expressed the underlying hegemony. Big striped paintings became a kind of flag for chauvinism and exclusion, and that understanding was advanced and maintained, especially in the schools and journals, for decades. Fast forward to 2015. Among the young (I’m counting my students in this calculation) it has become increasingly  difficult to maintain the particular theoretical nexus that ties big art to oppression. Millennials didn’t live through the 60s and 70s, and hence it’s the domain of their teachers and history books – as such it will never be a visceral part of the lived experience of young, maturing artists. Large scale painting (abstract and otherwise) is now one of a vast variety of historical and contemporary styles and media from which to draw upon in the formation of a body of work. But even as the remnants of post-modern critique lose their hold on the consciousness of the contemporary artist, the economics of being an artist in New York City present new issues in the creation and exhibition of large work. New York City tabulates its surface area not so much in blocks, miles, or acres, but in square feet. They are finite, and each one costs an increasingly large amount.

Studio space and its spiraling cost is the current crisis in art in New York. While there is probably a greater desire to make large scale painting than there has been in many years, it’s simply not feasible for most artists because they can’t afford to rent a space that would accommodate the desired size. This naturally leads in to a new quasi-political issue, one different than the post-modern identity based critique, and that tracks the drama being played out in the larger economy. The mega-galleries (Gagosian, Hauser and Wirth, Pace) are the only ones who consistently show monumentally scaled work, and their artists are the only ones who can afford to make it with regularity. The storied 1% advanced by the Occupy movement apparently pertains the creation and exhibition of fine art, too. The rough and ready space at 1329 Willoughby Ave. in Brooklyn is not a gallery by any means – it’s a cavernous warehouse that is currently in between commercial tenants, and its 3000 square feet and twenty foot ceiling quite naturally suggested the uncomplicated theme for the show. Space Available features thirteen artists who have quietly and resolutely found ways to express themselves in large scale. For some, it means making things that barely fit into their studios. Some use more ephemeral materials that can be collapsed or even discarded at the conclusion of an exhibition. Others work in modular constructions, so that each component is more manageable in size. Among the painters, it often simply means figuring out the maximum size that will fit on the working wall or floor, through the door, on to the freight elevator. And it often means many rolled canvases in the corner. What they all have in common is a strong desire to see their vision played out large and figuring out a way to do it, in spite of the practical and economic difficulties it presents.

Gallery hours are Saturday and Sunday from 12-6pm.

Lilian Kreutzberger graduated from the MFA program at Parsons New School, New York (2013). As a painter and sculptor, her aim is to synthesize her research in regards to the futility, dilemmas and challenges of modern utopias and the role that planning of urban spaces play within them. Her work has been exhibited at the Gemeentemuseum in the Hague, the Royal Palace in Amsterdam, the World Expo in Shanghai, Brucennial NY, the Kitchen NY, and has been included in major collections. Kreutzberger received grants from Fulbright, Elizabeth Greenshields Foundation, Mondriaan Fund and was nominated for the Royal Award for painting and the Buning Brongers Award for painting. She was a resident at the ISCP and an EAF at Socrates Sculpture Park.

Rob de Oude studied painting, sculpture and art history at the Hoge School voor de Kunsten in Amsterdam and SUNY Purchase, NY. He has shown in the US and abroad, notably at: Galerie Gourvennec Ogor in Marseille, France, Storefront Bushwick in Brooklyn, NY, McKenzie Fine Art in New York, NY, BRIC Rotunda in Brooklyn, NY, Galerie van den Berge in Goes, NL,  City Ice Arts in Kansas City, MO, and has participated in several art fairs in New York, Miami and Paris. De Oude has been featured a.o. in the NY Post, L Magazine, Artnet Magazine, NYArts Magazine, The New Criterion, Bushwick Daily, ARTNews and has been noted by Brooklyn Magazine as one of the 100 influential people in Brooklyn culture. He has his studio in Brooklyn, NY, and is co-director of Transmitter, also in Brooklyn, NY.