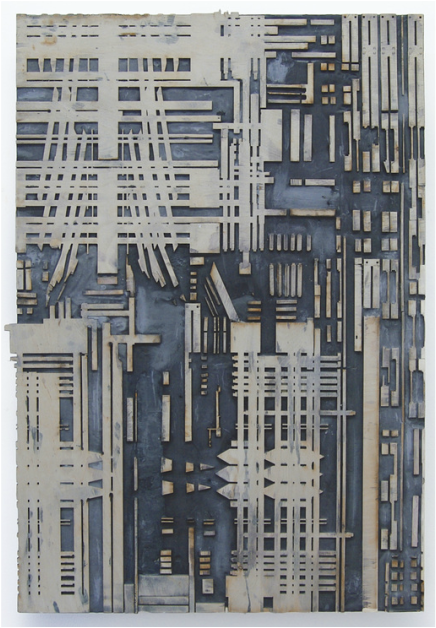 Matteawan Gallery presents a solo exhibition of recent work by Lilian Kreutzberger, an artist from the Netherlands currently based in New York City. The show focuses on a recent series of panels made with laser-cut wood and plaster based on abstracted architectural forms.

Architecture is a predominant theme in Kreutzberger’s work, as it provides a departure point for understanding  contemporary society through the built environment. It is not so much the structural aspects of architecture that interest her, but rather the rationale for building the way that we do. The works in the exhibition are based on architectural model designs from a previous project. Kreutzberger digitally combines architectural elements until they become a larger abstracted form, which is then laser-cut into wood. The open shapes in the wood are filled with either white or colored plaster, blurring the lines between sculpture and painting. The resulting works resemble maps or electronic motherboards, distancing them from their original architectural form and function.

Kreutzberger’s process gives her deeper insights into the built environment and has led her to think about abstraction in new and meaningful ways. Lilian Kreutzberger has exhibited in the Netherlands at the Gemeentemuseum, The Hague; the Royal Palace, Amsterdam; and Museum Henriette Polak, Zutphen. She has also shown at the Dutch pavilion at the World Expo in Shanghai, China; Ring Gallery, Croatian Association of Artists, Zagreb, Croatia; Sydney College of the Arts, Sydney, Australia; and Kunsthal Charlottenborg, Copenhagen, Denmark. In New York she has exhibited at the Brucennial 2014, Bruce High Quality Foundation; The Kitchen; Parsons The New School; and at Fresh Window and Active Space in Brooklyn; and Socrates Sculpture Park in Long Island City, Queens. Kreutzberger was a Fulbright scholar at Parsons The New School, and received grants from the Elizabeth Greenshields Foundation and the Mondrian Fund. She won the Buning Brongers prize for painting in 2008, the largest private art prize in the Netherlands. Kreutzberger is currently a Resident Artist at Eyebeam in Brooklyn. She was previously an Artist in Residence at the Eileen S. Kaminsky Family Foundation (ESKFF), a resident at the International Studio & Curatorial Program (ISCP), and she received an Emerging Artist Fellowship at Socrates Sculpture Park in 2014. Her work is in the Gemeentemuseum collection, the Eileen S. Kaminsky Family Foundation, and in the Caldic Collection. She was recently selected by Rietveld Architects in New York to make a permanent work for a residential building in Rijswijk, the Netherlands. Kreutzberger was born in the Netherlands and received an MFA from Parsons The New