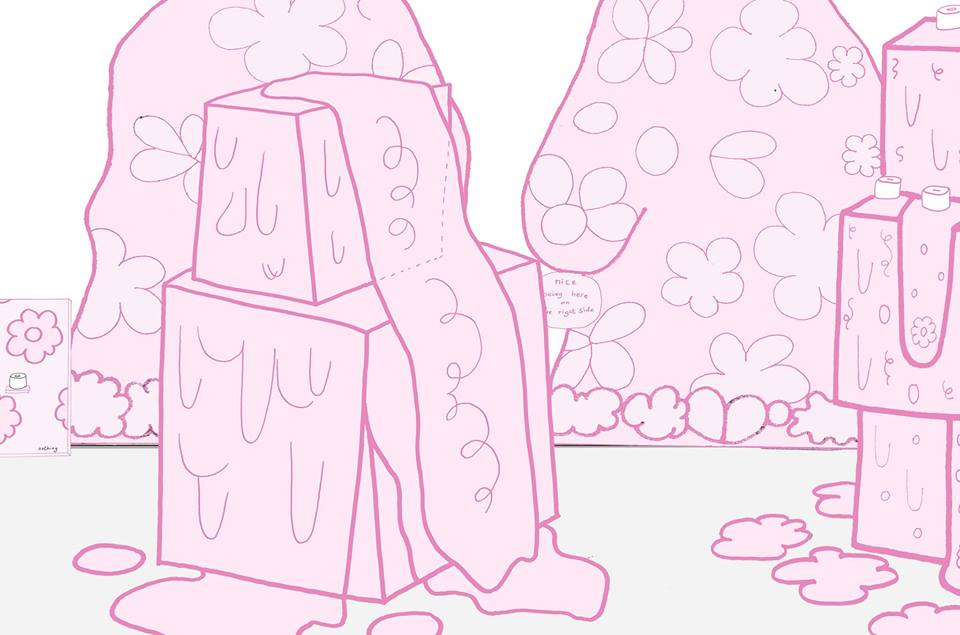 Koenig & Clinton is pleased to announce Huh, Lily van der Stokker‘s second solo exhibition with the Gallery, in which the artist celebrates defiance and embellishment in both subject and form, with all new works-all pink. At its core, Huh presents a greater discussion about beauty, femininity, and optimism to which the ugly, the cheap, and the vacant are tethered. The exhibition is on view from September 4 unitl October 18.

In the artist’s words, “Huh is about stupidity, paint and the body, the baby, the flesh; about roundness, closeness and softness…it is girly, sweet, decorative, cheap, and about pleasure and color. It is about the ground, the beginning, Zen and nothing, the monochrome.”

Huh holds a mirror to art world clichés and power structures, and laughs about them. Affixed to the Gallery’s wall, a pink-and-purple retail sign advertises: only yelling older women in here/nothing to sell. Just opposite, van der Stokker’s vast acrylic wall paintings engulf the main gallery space. Initially inspired by the artist’s own floral-patterned pajama pants, handwritten speech bubbles are adorned with curlicues, puffy clouds, and floral motifs. These charming blob-like texts comment on their own situation in the exhibition: very nice to lie here together; lovely to be next to you; we are the same.

Sculptural objects expand the wall paintings’ reach into three dimensions, while custom-made furniture invokes interior décor, a nod to feminine beautification and domestic coziness. At the center of the Gallery, the eponymous freestanding sculpture is covered in doodles, and appears to be spilling over with goopy paint; textual quips such as oopy, ucky, and uffy, puffy seem to ooze out from underneath. Just behind it, a large wooden panel is decorated with flowers and several small shelves, each one cradling a roll of toilet paper. In the lower-left corner, the object’s title: Nothing.

Huh plays on the tension between viewers’ assumptions and the reality present in van der Stokker’s expansive pink installation, challenging conventional ideas of girlishness, enthusiasm, and ornament. “The reputation of pink is one of low intellect,” notes van der Stokker. “For me, nothing and pink represent a comfort zone, a return to the womb, to the mother, to sleep, to the bed; a world without ambition or hierarchy; the ground. Here, pink is a world of pleasure, of goals unreached, a world without urgency or pressure.”

Exuberantly striving toward the comfort of decorative flatness, Huh stakes out an antithetical position to ‘bad boy art’, and encourages the viewer to question the anatomy of substance, meaning, and above all, seriousness.

Lily van der Stokker has exhibited extensively in both Europe and the U.S. In January 2015, van der Stokker’s installation will be on view in the Hammer Museum’s Wilshire Lobby, Los Angeles. Her most recent exhibitions include Sorry, Same Wall Painting at The New Museum, New York; Terrible at the Museum Boijmans, Rotterdam; To The Wall with David Shrigley at the Aspen Art Museum; and Plug In #52 with Jim Iserman at the Stedelijk Van Abbemuseum in Eindoven. She is the subject of It Doesn’t Mean Anything, But It Looks Good, published on the occasion of her exhibition No Big Deal Thingat the Tate St. Ives in Cornwall. Van der Stokker has been commissioned to produce numerous public works, including Kalm nou maar…(Don’t Worry), Rotterdam (2013); Celestial Teapot, Utrecht, Netherlands (2013), and The Pink Building, Hannover (2000). The artist lives and works in New York City and Amsterdam.