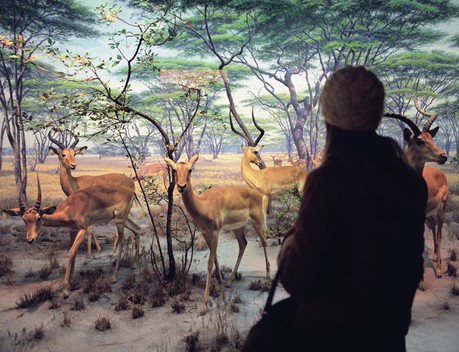 Liselot van der Heijden presents Inanimate Object, a new two-channel video made for the Recapturing the Scenic Wilds exhibition at Wave Hill, on view from September 6 until December 7. The video, shot in the American Museum of Natural History, records a life-size bronze sculpture of Theodore Roosevelt, by StudioEIS, posed as a relaxing naturalist. Despite his total stillness, when the frame empties, his bland gaze takes on a surprising pathos. As visitors and guards cross the screen, however, the lifelike figure reverts to mute statue. By placing the video on opposite walls, Van der Heijden implies that museum-going is a form of voyeurism: the bronze may stare at itself, return the audience’s gaze, or even spy on their backs.

Van der Heijden’s interest in spectatorship underpins much of her work. This exhibition also features works from her long-term series Natural History. These photographs, also taken in the American Museum of Natural History, capture the silhouettes of museum visitors in front of dioramas. Drawing attention away from the wilderness to the gaze that frames it, they suggest that depictions of nature ultimately reflect cultural conditions, rather than the nonhuman world. In the two photographs on view, for example, the coy gazelles and the aggressive ape mirror their respective female and male viewer, suggesting how social factors inform scientific knowledge.

Over the past decade, van der Heijden has exhibited throughout Europe and the United States, including at the Palais de Tokyo, Paris; Musée d’Art moderne et contemporain de Strasbourg, France; Videonale 8, Bonn, Germany; Smart Project Space, Amsterdam; and Centre de Cultura Contemporània de Barcelona. In the United States, her work has been featured at the New Museum of Contemporary Art, the Brooklyn Museum, LMAK Projects, Schroeder Romero, Exit Art, Artists Space and White Box, among other venues. Van der Heijden received a fellowship from the Civitella Ranieri Foundation. She holds an MFA from Hunter College and a BFA from the Cooper Union for the Advancement of Science and Art.