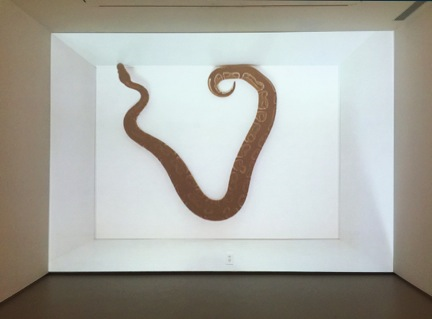 From February 6 until March 26, Liselot van der Heijden's 'Serpent' is on view at Kent Fine Art.

From February 6 until March 26, Liselot van der Heijden’s video installation ‘Serpent’ is on view at Kent Fine Art in the exhibition ‘Witness‘.

In the video Serpent a snake moves continuously in an enclosed white space. The continuity of movement attracts and mesmerizes through its surreal scale, positioning and sense of gravity. Following Bush’s totalizing usage of “evil’ in van der Heijden’s visual vocabulary the oblivious snake becomes the serpent — symbol and instigator of the original sin, who seduces Eve with the promise of the divine knowledge of Good and Evil, if she eats a fruit from the Tree of Knowledge.

Liselot van der Heijden produces installations, videos, objects and photographs. Recurring themes in van der Heijden’s works are control and power of the gaze, the tendency to objectify “the other” and “nature” as a cultural/political idea and anthropomorphic projection. Her work suggests that representations of nature reveal more about cultural, ideological, political and social frameworks, than actual nature.