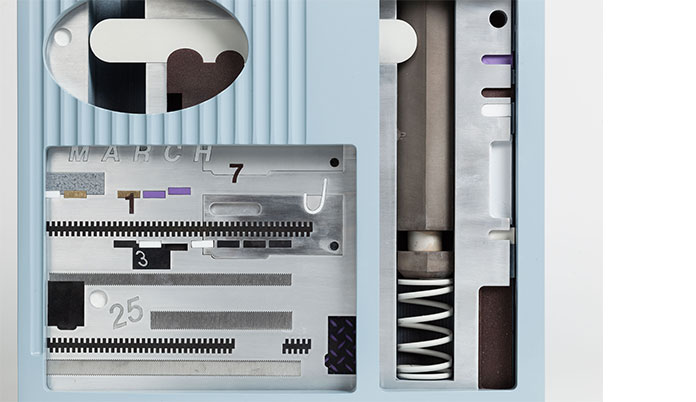 Magali Reus will present a new body of work at SculptureCenter co-commissioned by SculptureCenter, the Hepworth Wakefield in Yorkshire, UK, Westfälischer Kunstverein in Münster, Germany, and the Fondazione Sandretto Re Rebaudengo in Turin, Italy. ‘Spring for a Ground‘ will be Reus’ first solo museum exhibition in the United States and runs from May 3 to July 5.

Colliding the macro logic of daily architecture with the more microscopic or metaphorical projections of a body inhabiting space, Reus’ exhibition turns focus to the physical and psychic space of the street curb. Although rendered abstractly, Reus’ curbs contain fragments of objects and textures: they appropriate the logic of urban terrain but remain unnerving in their persistent repetition of partially rendered, and uncannily placed domestic forms. Linked with the metaphorical idea of an epidermis, they are surface barriers between external and internal worlds.

A new series of smaller sculptural “lock” works expose a perversity of mechanical detail. Like archaeological markers, these works become enigmatic containers for a type of numerical shorthand that evades translation. A date or a time enlists structural responsibility, but as with the curbs, they create a perplexing collapse of boundaries, blurring the graphic and the emotional.

Magali Reus (born 1981 in The Hague, The Netherlands) is based in London, UK. Recent group exhibitions include The Noing Uv It at the Bergen Kunsthall, Bergen, Norway (2015); Theater Objects at the LUMA Foundation, Zurich, Switzerland; nature after nature, Fridericianum, Kassel, Germany; and Pool, Kestnergesellschaft, Hanover, Germany (all 2014). Reus has a forthcoming solo exhibition at The Stedelijk Museum, Amsterdam, The Netherlands in 2016.