This Is Where It Ends was listed by The New York Times as Young Adult bestseller!

On January 5 Marieke Nijkamp’s book This Is Where It Ends got published in the US, by Sourcebooks Fire. Not long after that she was listed on the bestseller list of the New York Times, in the category of Young-Adults. Told from four different points of view, This Is Where It Ends takes place over the course of one harrowing hour, where students and teachers are trapped with a former classmate determined to enact his calculated revenge one bullet at a time.

This Is Where It Ends

The students of Opportunity High School in Alabama, had no reason to think that today would be different than any other day. Then the auditorium doors didn’t open after their start-of-school assembly.

10:00 a.m.
The principal of Opportunity, Alabama’s high school finishes her speech, welcoming the entire student body to a new semester and encouraging them to excel and achieve.

10:02 a.m.
The students get up to leave the auditorium for their next class.

Love, loyalty, bravery, and loss meld into a chaotic, heart-wrenching mélange of issues that unite some and divide others. A highly diverse cast of characters, paired with vivid imagery and close attention to detail, set the stage for an engrossing, unrelenting tale. The starkly chilling realism and themes of abuse, death, and assault, among others, may prove too much for younger or sensitive readers, but the story unquestionably leaves an indelible mark.
– Publishers Weekly

With a thrilling narrative, topical subject matter, and diverse characters, this is a first purchase for libraries serving teens.
– School Library Journal

Strong characterizations capture diversity in gender, race, ability, and sexuality. Even reluctant readers will anxiously pursue the ending, unable to turn away from the tragedy and in desperate hope for a resolution, knowing there cannot be a happy ending.
– Booklist

“[THIS IS WHERE IT ENDS] leaves you in awe.”
– New York Public Library

Marieke Nijkamp was born and raised in the Netherlands. A lifelong student of stories, language, and ideas, she is more or less proficient in about a dozen languages and holds degrees in philosophy, history, and medieval studies. She is a storyteller, dreamer, globe-trotter and, as said by herself, a geek.

For every hour she spent writing on TIWIE, she spent another (at least) researching. She read firsthand accounts of shootings, listened to 911 calls, plowed through hundreds of pages of investigative reports, she talked to people, kept up with news and social media feeds as active shooter situations emerged and she familiarized myself with the psychology of being held at gunpoint. As much as possible, she immersed herself in what we know about school shootings. And she tried to translate this all into the book. 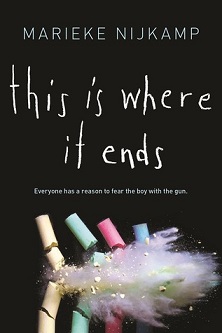