From October 15 until December 16, the Center for Curatorial Studies at Bard College in Annandale-on-Hudson will present the group exhibition ‘We are the Center for Curatorial Studies’ featuring Dutch artist Marjolijn Dijkman. ‘We are the Center for Curatorial Studies’ is both an exhibition and research project, a multi-year program incorporating artist projects, exhibitions, collaborations, and public and non-public programs. It perceives curating as a series of actions leading toward the emergence of an eventual exhibition-form. Its first iteration comprises a selection of extant artworks, new commissions, and ongoing art projects in a display relating to the “exhibitionary” and the “curatorial.” More than 30 works will be on view, acting as a catalyst for discussions, public presentations, and teaching, shaping the core activities of CCS Bard and its graduate program. During this initial phase, artists will also spend time at CCS Bard teaching, lecturing, and developing projects with the graduate program and its students. The program consists of different intersecting components, challenging the ways in which an exhibition gathers its form through a deep consideration of the juxtaposition of subjects, things, images, information, structures, and/or display spaces. Dutch artist Marjolijn Dijkman will contribute to the exposition with spatial interventions that will explore the prominent role played by modernism in display systems and museum exhibition techniques. 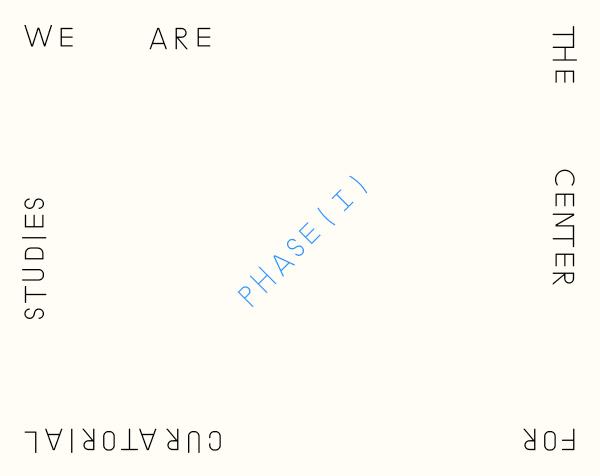 Additionally, opening on November 11, and continuing until December 22, the project extends to the Lower East Side gallery P! in New York City with ‘We are the (Epi)center…’, a two-month project that proposes new directions for an institution of curatorial practice through short-term exhibitions, public events, performances, seminars, pop-up displays, and other programs developed in collaboration with artists and students from the graduate program at CCS Bard.

Marjolijn Dijkman (1978) graduated from the free media department at the Gerrit Rietveld Academy in Amsterdam in 2001, finished a post graduate course at the Piet Zwart Institute in Rotterdam in 2003, and was a researcher at the Jan van Eyck Academy in Maastricht during 2006 and 2007. Her works investigate the relationship between people and their surroundings, as well as their inexhaustible determination to interfere and exert power and influence over the world around them. The works can be seen as a form of science fiction, partly based on facts but brought into the realm of fiction and speculation. Often the works mix aspects from popular culture and science, making connections through time and culture and try to open up a public debate around the topics they address. The research that was leading up to the works investigates traces or residues of events in the past, present or even from an imagined future. Ranging from photographic archives and film, to landscape interventions and sculptural works, Dijkman’s practice concerns itself with futurology, history, museology, human geography and ecology amongst others.