Mark Manders participates in ‘Storylines: Contemporary Art at the Guggenheim’ 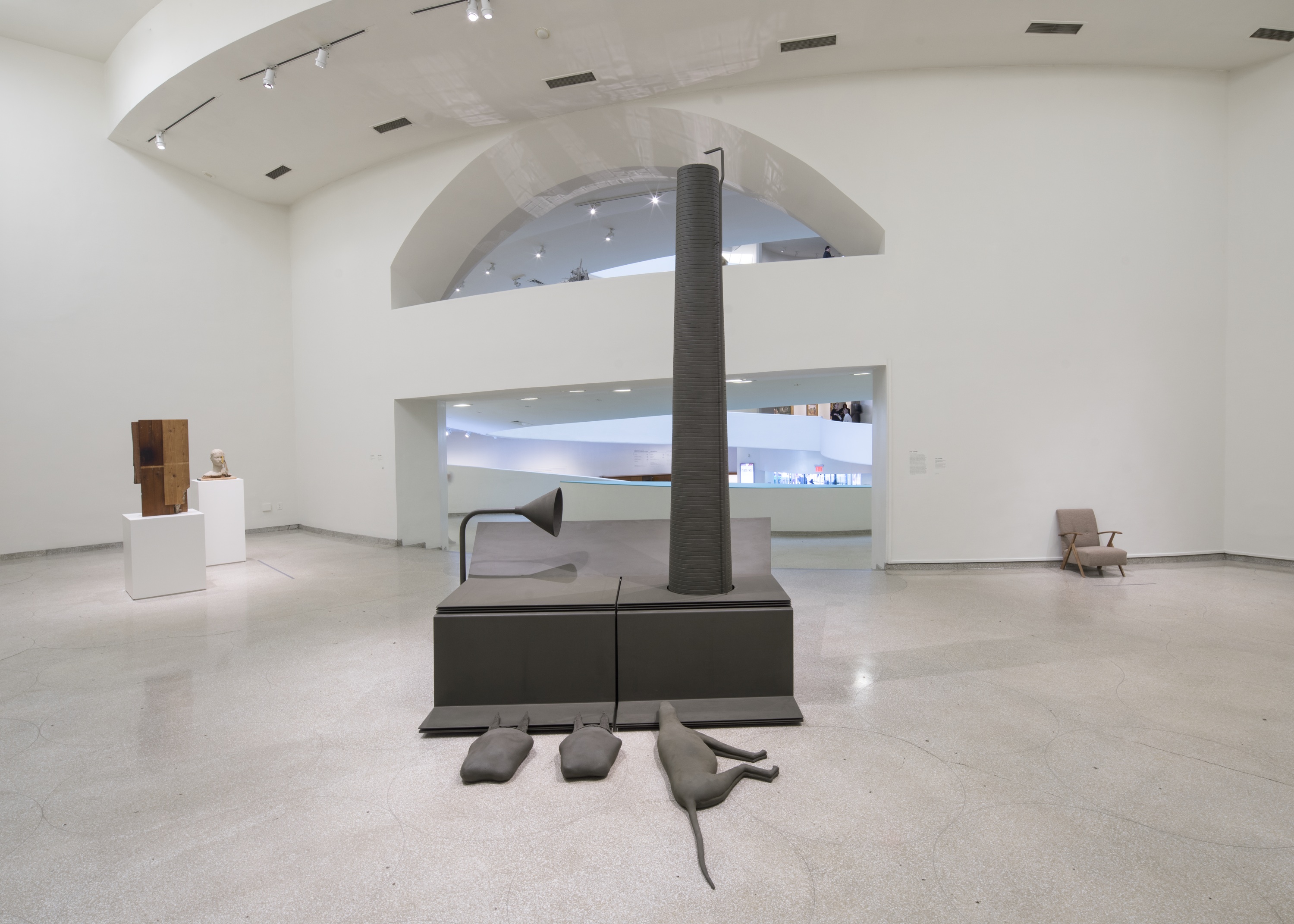 Mark Manders‘ work is on view in the exhibition ‘Storylines: Contemporary Art at the Guggenheim‘ until September 9.

Visual art has always been closely associated with storytelling. In Western culture, painting and sculpture initially evolved to illuminate narratives of religion, patronage, and power. Over the centuries, genre scenes, still lifes, and portraits—often created as intricate allegories for religious or historical subject matter—became popular as the narrative role of art expanded. In the 20th century, with the advent of abstraction as a radical break with the past, many artists associated with the avant-garde rejected the figurative and, hence, eliminated explicit narrative content. In the United States and Europe, this tendency culminated during the 1960s and 1970s in Minimal painting and sculpture that foregrounded geometric abstraction and in Post-Minimalism’s examination of process and materiality. The 1980s witnessed a resurgence of figurative art, much of which harked back to expressionistic styles of the 1920s and 1930s.

During the 1990s, a generation of younger artists embraced the concept of storytelling to articulate the politics of identity and difference, investing both abstract and representational forms with narrative content. Storylines opens with key examples from that decade, which serve as thematic anchors and highlight the museum’s own exhibition history. Most of the works on view, however, were created after 2005 and offer an expansive view of the new paradigms for storytelling forged during the past ten years to communicate ideas about race, gender, sexuality, history, and politics, among other trenchant themes.

Bringing together over one hundred works from the Guggenheim’s contemporary collection, Storylines examines the diverse ways in which artists today engage narrative through installation, painting, photography, sculpture, video, and performance. For these artists, storytelling does not necessarily require plots, characters, or settings. Rather, narrative potential lies in everyday objects and materials, and their embedded cultural associations. In projects created through extensive research, acts of appropriation, or performance, the artists in Storylines uncover layers of meaning, turning to individual experience as a means of conveying shared stories, whether real or fictional.

The recent narrative turn in contemporary art cannot be separated from the current age of social media with its reverberating cycles of communication, dissemination, and interpretation. Seemingly every aspect of life is now subject to commentary and circulation via digital text and images. These new narrative frames highlight the roles that each of us can play as both author and reader, foregrounding the fact that meaning is contingent in today’s interconnected and multivalent world. As a means of celebrating this dynamic, the museum has invited writers to contribute reflections—in prose or poetry—on selected works in Storylines. Engaging the rich historical relationship between literature and art, the resulting polyphony signals the diverse interpretive potential that lies within each object on display. Visitors may access these texts using this website, the Guggenheim app, or booklets located throughout the museum. 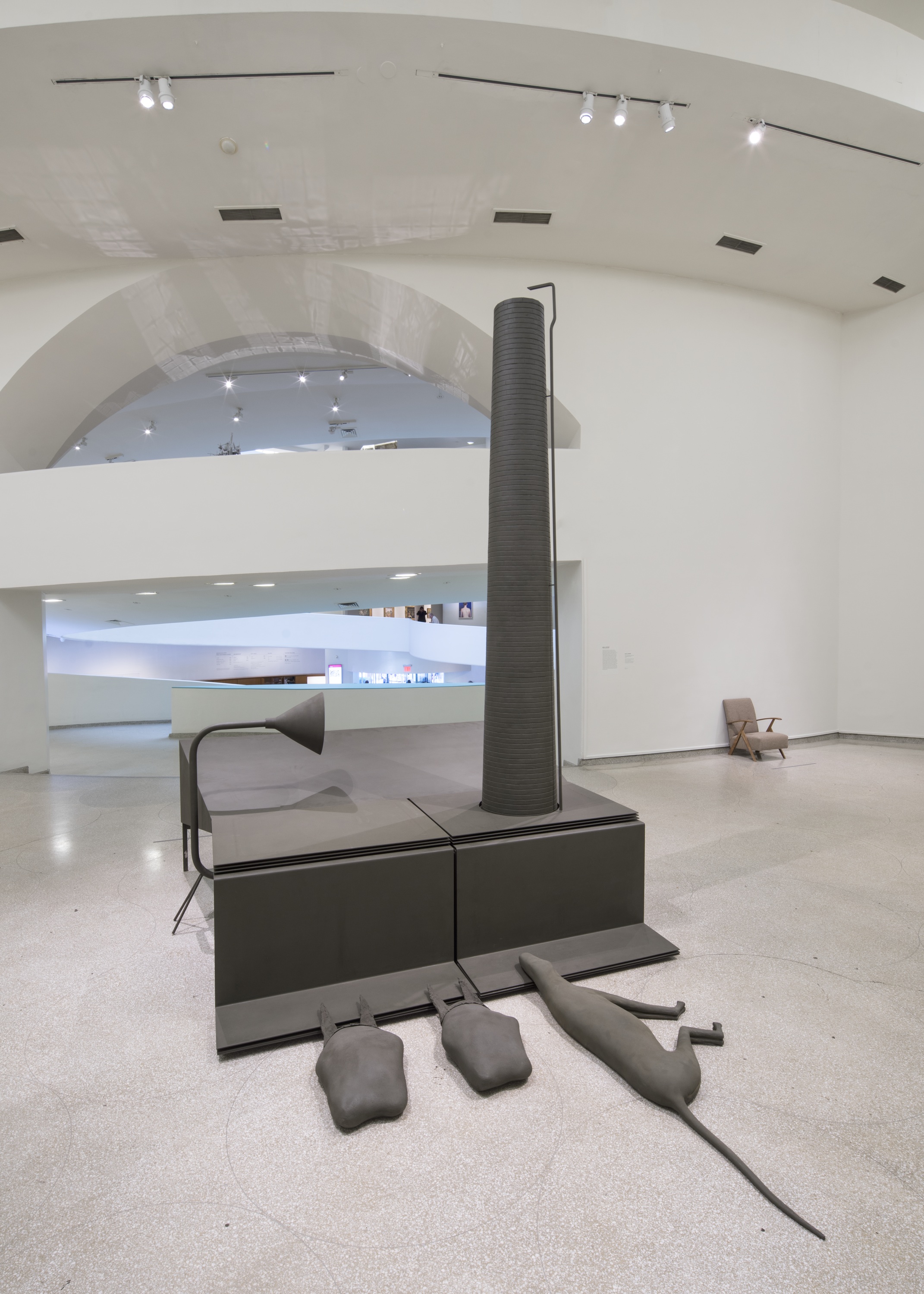 Mark Manders was born in 1968 in Volkel, Netherlands. He trained at the Grafische School and the ArtEZ Hogeschool voor de Kunsten, both in Arnhem, Netherlands. Since 1986 Manders has been working on the ongoing project Self-Portrait as a Building. The idea for this monumental, self-searching project took root when the artist created Inhabited for a Survey (First Floor Plan from Self-Portrait as a Building) (1986)—a fictional floor plan formed by writing implements that were on the Manders’s desk at the time of the sculpture’s creation.

The repetition and combination of forms and materials are salient features of Manders’s sculptures and installations. By continually recycling, modifying, and creating new arrangements of favored configurations and objects—human figures, animals, furniture, and architectural elements—Manders expands the limits of this decades-long conceptual self-portrait. The figures who appear in works such as Colored Room with Black and White Scene (1998–99), Continuous Livingroom Scene (2007–08), and Figure with Book and Fake Dictionaries (2009) simultaneously invoke the sculptural traditions of a variety of cultures and none in particular.

The expressionless faces and idealized forms in Manders’s sculptures reference the stylized anatomical features typical in ancient Greek kouroi. This historical citation is compounded by the artist’s deceptive use of materials and fragmentation of form. Though the roughly cut contours of these elemental gray figures appear to have been formed by hands shaping soft clay, they are actually made of painted epoxy or bronze. In Unfired Clay Figure (2005—06), a life-size painted epoxy figure of a child is bisected by several slabs of wood. The wood structure is connected to a horizontal wood beam that straddles the seats of several iron chairs. Surrounding the chairs’ legs, linear wood objects inscribe the vertical elements of the sculpture. By juxtaposing the fragmented human form with banal chairs and small wooden objects, Manders prompts viewers to form their own ideas about how the disparate sculptural elements are related.

As Manders’s commitment to his prodigious undertaking “self-portrait as a building” has remained constant for decades, his style has also remained relatively unchanged. When twenty-three years’ worth of his work appeared together in the Dutch Pavilion at the Venice Biennale (2011), the effect was uncanny. In spite of the temporal divide that separated the earliest from the latest work, the related combinations of familiar forms and materials pointed to a single moment of creation or conception. Demonstrating remarkable restraint and ingenuity, the artist continues to work within the novel stylistic idiom he established in 1986.