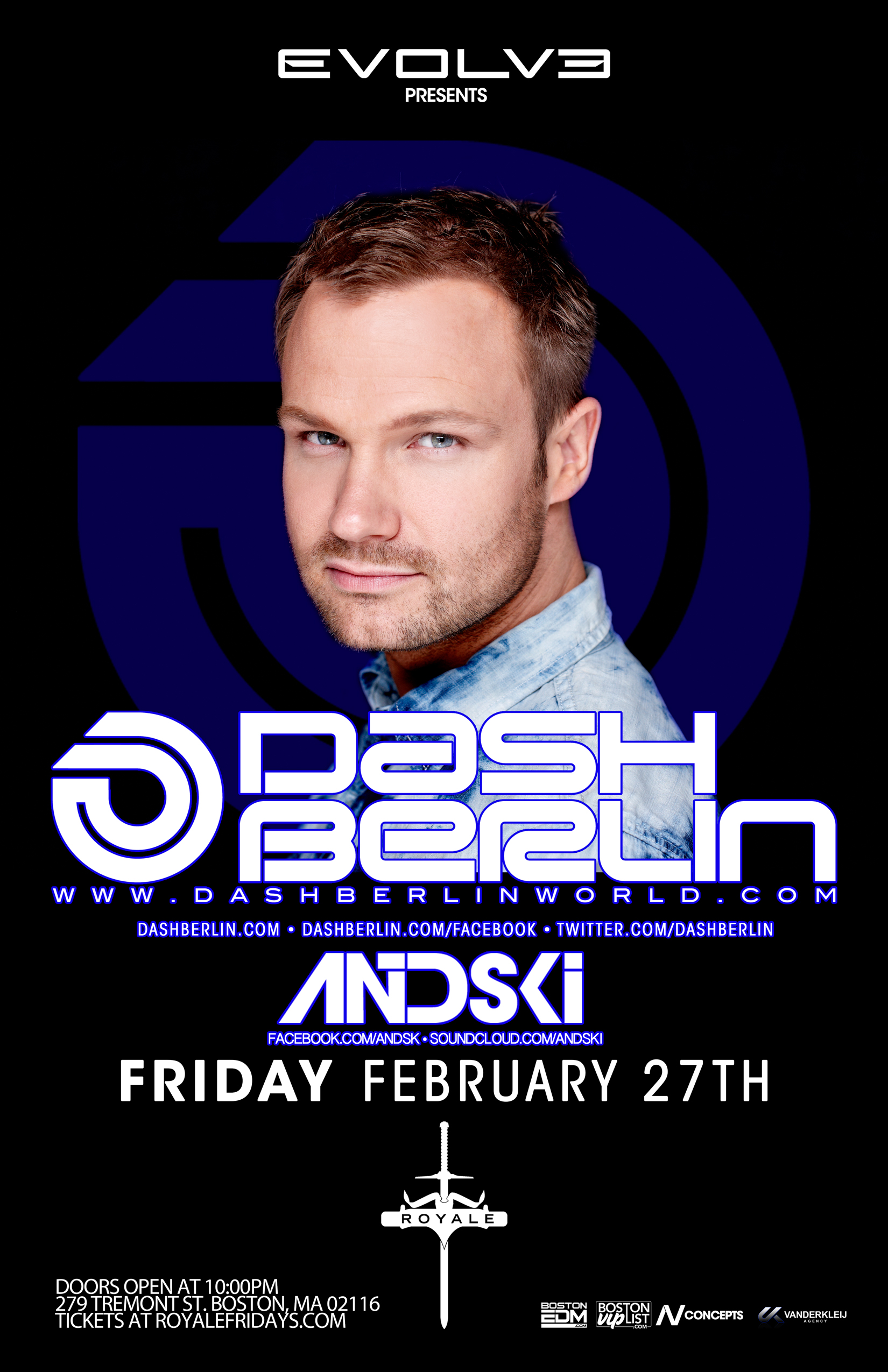 Dutch DJ Dash Berlin will perform February 27th in Royale Nightclub Boston. More Dutch is coming to Boston in May.

Dutch trance DJ Dash Berlin will perform on February 27th in Royale Nightclub Boston.
Dash Berlin is a project from The Hague formed in 2007 by Eelke Kalber and Sebastiaan Molijn. The frontman is DJ Jeffrey Sutorius.

You wouldn’t think that, having dominated the international dance scene for nigh on a decade, the Dutch DJ elite like Tiësto, Ferry Corsten and Armin van Buuren would really be suffering from what their fellow countryman Dash Berlin calls “an inferiority complex”. “It’s a small country, barely visible on a map, so that might be behind our drive,” he laughs.
“But the truth is that even though our country is small, our individual dreams have all been big and we all have a matching work ethic.” Signed to van Buuren’s Armada label, and with a recent remix of Corsten in the box, Dash Berlin has now fully risen into their ranks.

The intention behind the music is pure. He also sees any distinctions between ‘trance’ and ‘EDM’ as equally redundant as notions of ‘mainstream’ and ‘underground.’ “All music genres are branches from the same tree,” he believes. “Instead of focusing on the superficial differences that divide us, I prefer to focus on the fundamental things that unite us. It’s like the white light that comes from the sun, all possible colour combinations are hiding in it. Some like the colour red and some like the colour blue, but we all share the same light.” And it keeps Dash Berlin growing and growing.
For the entire interview with Dash Berlin click here.

But Dash Berlin is not the only Dutchmen in Boston, later this year a Dutch showcase is coming up!

SEKOIA and Together Boston will collaborate to showcase Dutch artists who have made a name forthemselves locally and internationally but are rather unknown in the relatively young American scene. The series will kick off during the 2015 Together Boston Festival (May 10-17), which is a renown and highly respected event during which artists, creatives, music enthusiasts and industry professionals will be present, sharing opinions, ideas and a taste for good music. Together Boston is a prime opportunity for new collaborations to be made between the already renowned Dutch scene and the vast American creative industries market.

The main focus of the event will be the artistic showcase, consisting of a lineup of underground dance music DJs from the Netherlands, curated by SEKOIA but also fully in line with the feel of the festival. Alongside the musical aspects of the showcase, aspiring Dutch visual artists will make an appearance. The vision is to also bridge the gap between music and art, and include a visual arts component in the festival. This combination of music, visual art and the selection of quality artists will form a unique atmosphere at the venue to fully portray vibrant scenes from cities like Amsterdam, Rotterdam and Utrecht.