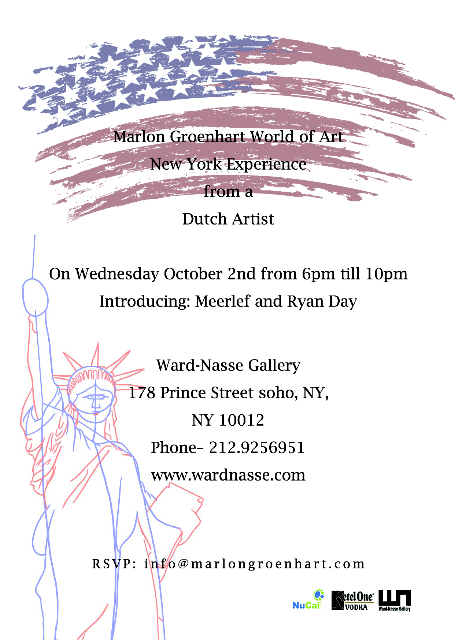 On October 2, 2013 Marlon Groenhart exhibits his work in the Ward-Nasse Gallery in Soho, NYC.

On October 2, 2013, 6-10pm, Marlon Groenhart exhibits his work in the Ward-Nasse Gallery in Soho, NYC. With his expressive, colorful pieces Marlon Groenhart allows us to glimpse his vision of New York. Through this exhibit he brings people together and he creates a story in word and image in which guests, art and media all take part in this social experiment.

Suriname born and living in Amsterdam, the Netherlands, Marlon Groenhart sees enjoyment as a “Life Art” and he infiltrates this into each facet of his own life. Art, culture, the people with whom he mingles, the introductions which he initiates and the projects behind which he stands and supports. Actually, Marlon Groenhart’s life is the embodiment of joi de vivre. His multi-dimensional personality and this joi de vivre come together to form the foundation of a new social art project in NYC.

New York has always been a muse and Marlon Groenhart sees it as a phenomenal adventure to awaken his dream project, “Marlon Groenhart World of Art”, in the city that never sleeps. WIth this exhibit he brings his vision and interpretation of his much loved city to canvas. Soho, the creative core of NYC, forms the backdrop of this one day exhibit. His appreciation of Jean-Michel Basquiat’s work compliments his own style. The broad naive strokes, use of expressive colors and an almost child-like joy are trademarks of Marlon Groenhart’s paintings.

Thanks to the sponsorship of Ketel One Vodka and NuCall Marlon Groenhart showcases his inspiring works in the Ward-Nasse Gallery in New York. In the style of the fast paced and adventurous life of Marlon Groenhart, for whom no day is the same, a one day exhibit fits perfectly into his vision: seize the dag and enjoy the moment.

After this exhibit Marlon Groenhart donates one of his pieces to The Dutch-America Foundation. The work will be auctioned on November 22, 2013 during the prestigious Peter Stuyvestant Ball.