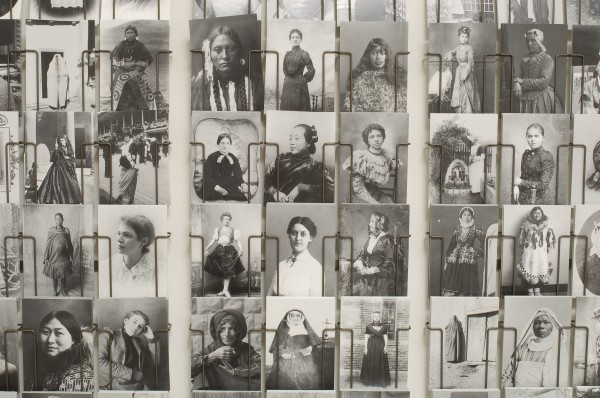 From January 16 until February 2, 2014, Jack Hanley Gallery presents Mathilde ter Heijne, “Woman To Go,” an installation displaying postcards which can be taken for free.

This interactive art piece is an ongoing project by Mathilde ter Heijne. Each postcard shows a portrait of an unknown woman that lived between 1839 (the beginning of photography with Daguerreotypes) and the 1920s. On the message side is the biography of a known woman who was influential or extraordinary in her time. The pictures and biographies were collected from all over the world.

The women whose biographies are known, all struggled for their individual goals in a world where men were predominant, where women didn’t have the right to vote or to own property, and only men were thought to be worth remembering. Most of these women have been forgotten and the many unknown women help us to remember the known. The postcards are to be taken for free in order to give people the opportunity to “take away” a female role model, or a little source of inspiration.