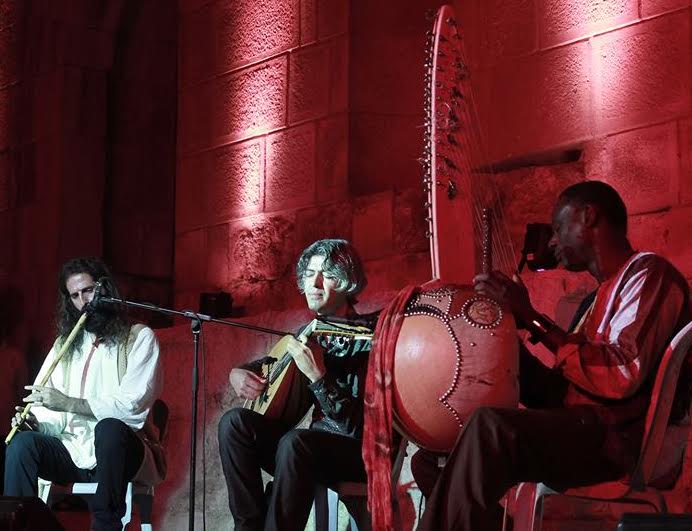 From January 14 to 16, the Mehmet Polat Trio will perform in New York City during APAP | NYC 2016. On January 14, Numinous Music – Newer Sounds presents the World Music Showcase, at Hi New York City. The Mehmet Polat Trio will perform here among other artists from all over the world. The will play from 8:15 – 9 PM. There’s no cover for APAP badge holders, other guests pay 15$ (cash). For more information about the event, click HERE.

On January 15, The Shinnyo Center is excited to welcome the Mehmet Polat Trio for a special transatlantic session of their ongoing Jazz Meditation Series. For more information about the event, click HERE.

On January 16, Numinous Music presents: ‘An Intimate Persian & Turkish World Music Showcase With The Mehmet Polat Trio and Sahba Motallebi’, at the Chhandayan Center for Indian Music. They will perform collectivly and individually as well. The showcase will be from 7-9 PM and there’s no cover for APAP badge holders, tickets are 20$ and 16$ for students. For more information about the event, click HERE.

On January 17, Mehmet Polat performs at The Cedar in Minneapolis, and on January 19 they play at Drom in New York.

About The Mehmet Polat Trio

The Mehmet Polat Trio is a spiritual yet adventurous meeting of three virtuosos of their magical instruments: ney, kora and ud. With roots in the Ottoman, ancient Anatolian, Balkan and West African music traditions, the trio welcomes listeners with its musical authenticity. The original compositions are colored by daring improvisations and grooves, presented in an atmosphere of chamber music. The Mehmet Polat Trio invites you to a sincere musical journey from the past to the present.

Mehmet Polat was born and raised in Urfa, Turkey, and studied Ottoman music in Istanbul. His new approach to ud playing and his broadened vision towards music making, brought him to Amsterdam in 2007. Here he infused his music with that of many other musicians of the world. After his studies in Indian, Persian, Arabic, Flamenco and other musical styles, Mehmet discovered the inner world and also the spiritual side of the African music. He was touched especially the timbre of kora. By the idea of having kora as the earth element, ud as space and ney as air, the idea of Mehmet Polat Trio was born.

A great player of ney, Sinan Arat was also born in the East of Turkey, Erzincan, has spiritual music roots from Turkey till India and his broadened vision has brought him to the Netherlands. A master of kora, Bao Sissoko was born in Senegal, after years of touring to the Europe, he settled finally in Brussels. Same and Mehmet and Sinan, Bao has stayed in Europe also for broadening his vision and looking beyond the horizons. The three of them had many enriching experiences playing their non-Western instruments as soloists and color musicians among artists from classical, jazz and other Western genres. In the unique constellation of the Mehmet Polat Trio, the ney, kora and ud assume the main roles, with ample freedom to explore the full capacity of each instrument in the mix. The musicians value the traditional, spiritual character of their instruments and at the same time the opportunities to innovate with them.

Mehmet added two extra bass strings to his ud, expanding the instrument’s function and color in the overall sound. Sinan has played flutes from India to Western Europe, and brings these influences to his Turkish ney playing. Bao added half-tone tuning clips to each string of his kora, to accommodate different tonalities. As the reviews declare, The Mehmet Polat Trio is more than a meeting of Turkish and African instruments. Mehmet Polat thinks that music playing is a very sincere and direct connection from heart to heart. In the music of Trio, Mehmet is fusing his artistic perfectionism with his ongoing spiritual paths, which appears as many deep expressions and many colors in his music.

The Trio is playing Mehmet Polat’s compositions, which are mostly in Jazz forms and they have lots of free space for each musician to improvise. And with a wide range of tone, makam from the Classic Turkish Music and the rhythm choices from Turkey, Balkan World infused with African interpretation, they are pushing their boundaries and moving forward in fusing those instruments and their cultures. They are currently preparing to record their second album ‘Ask Your Heart’, expected to be released in 2016.

‘The music of the Mehmet Polat Trio was a cure for the soul with the sincerity and pure emotions of their songs.’ – Jazzkaar Festival, EE (LIVE)

‘Introspective music that needed no flashy fanfare and which brought the audience into a world of peace, spaciousness, serenity, pleasure and beauty.’ – Jazzenzo, NL (LIVE)

‘In his elaborate compositions Mehmet Polat combines Anatolian, Middle Eastern music styles with African patterns. Masterfully he fuses the full range and capacity of ney, kora and ud together with their cultures and beyond.’ – Jazz n More Magazine, CH

‘Next Spring is a touching encounter between three musical sensibilities that understand each other beyond cultural and linguistic divides. They sound as they have always been playing those three instruments together from a common emotional core, or a spiritual unity of talents.’ – Ethnotempos, FR

APAP|NYC 2016, January 15-19, is the members conference of the Association of Performing Arts Presenters. Held each January in New York City, the conference is the world’s largest networking forum and marketplace for performing arts professionals. Mor​e than 3,600 presenters, artists, managers, agents and emerging arts leaders from all 50 U.S. states and more than 30 countries convene in the city for five days of professional development, business deals and exciting performances.

APAP|NYC is the place to feel the pulse of the industry. Plenary speakers such as Stephen Schwartz, Rosanne Cash, Harry Belafonte and Ira Glass inspire attendees. Innovators from various fields share knowledge. Colleagues exchange practices and problem-solving techniques. The popular EXPO Hall is the one-stop networking hotspot with 370 exhibitors. More than 1,000 artist showcases make up a mini festival of the performing arts.