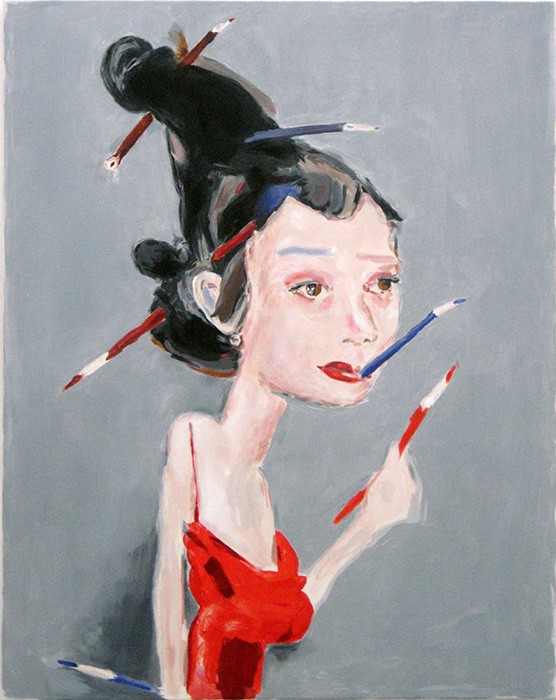 From March 27 until May 3, 2014 Anna Zorina Gallery presents the first New York solo exhibition 'ZzzzzZzzZzz' of Dutch artist Micha Patiniott. The opening reception will be held on Thursday, March 27, 6-8pm.

The title refers to a state of suspended consciousness, often mistaken for sleep or lack of awareness, which is invaluable for artists and others open to expanding their experience of the world. This state can lead to a complete absorption in the other, as an artist might have in his subject, or to finding that liminal region between presence and absence that allows for a simultaneous perception of multiple realities, even opposing ones. Patiniott says of his own work, “The tragic-comic nature of these expressions is fused with mixtures of fragility and strength, awkwardness and beauty, failure and success, accidents and purpose.”

Micha Patiniott is a master of the ambiguous and an intrepid explorer of the absurdity inherent in the human condition. His basic understanding of the world and of art’s role in it is close to Huizinga’s theory of Homo Ludens (Man the Player), which asserts that play is necessary to the generation of culture. Play is originally how most animals, including humans, get to know their world and determine their place in it, but that exploratory curiosity and openness usually diminishes and even disappears as we get older. For Patiniott, interaction with art, whether as creator or as engaged viewer is the best way to keep this faculty alive.

Much of Patiniott’s work looks to painting itself as a paradigm of the challenging act of creation. In Breaking Wheel, he upends the cliché of the tortured artist by placing the canvas on the rack instead, ‘being stretched’ as his visual pun has it, and reversing the balance of power between the terrifying demands of the blank canvas and the artist struggling for expression. The painting also references two martyrdoms of the saints, both familiar from many early paintings: St. Catherine’s Wheel with its splintering spokes, here turned by attenuated, disembodied arms (the artist intervening from outside the frame?); while the cruel little fires below evoke those that roasted St. Lawrence. The viewer doesn’t quite know how to feel about this violence visited upon an animated inanimate object; the humor of the allusions is balanced by the obvious distress of the anthropomorphized canvas. Is Patiniott indulging his own revenge fantasies by turning the tables on the canvas that taunted him with its emptiness only moments before? Or is he amusing himself and us, playing a role? We bounce between disturbance and hilarity until we find ourselves suspended somewhere between, where both can be true.

Micha Patiniott has received multiple grants and fellowships, including the Louise Bourgeois Fellowship and the Mondriaan Foundation stipend. He was awarded a two-year residency at the prestigious Rijksakademie for Visual Arts Amsterdam during 2006-2007. His solo exhibitions include the Stedelijk Museum Schiedam and the Hudson D. Walker Gallery at the Fine Arts Work Center, Provincetown, MA.