The first solo exhibition of Richard Koek, "New Amsterdam," will be presented from July 14, until September 1st at Sena Space in New York, NY.

The first solo exhibition of Richard Koek, “New Amsterdam,” will be presented from July 14, until September 1st at Sena Space in New York, NY. A selection of Koek’s photos, curated by Rijksmuseum‘s Erik van Ginkel and the Keith Haring Foundation‘s Julia Gruen, expose the look and feel of the time when New York was still New Amsterdam. 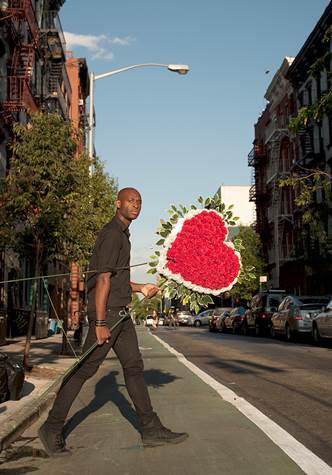 New Amsterdam was a 17th-century Dutch settlement established at the southern tip of Manhattan Island, which served as the seat of the colonial government in New Netherland. New Amsterdam was renamed New York on September 8, 1664. Celebrated tattoo artist and gallery owner David Sena offered the Dutch-American Koek the opportunity to display his vision of New York City in his gallery. Julia Gruen, executive Director of the Keith Haring Foundation, New York City, and Erik van Ginkel, Managing Director of the Rijksmuseum have selected the content for this show. Sena Space is honored to have been chosen as the location for Richard Koek’s solo exhibition debut.

According to Gruen, “Richard has a unique eye for the still astonishing diversity of New Yorkers, natives or transplants. A transplant himself, there’s no denying the power of Richard’s personal vision of the city he has made his home. His evident talent and the works’ singularity speak for themselves.” Additionally, van Ginkel stated: “I realized that Koek’s pictures have become part of my visual memory of New York City. That is a little strange, since it is not limited to my own memories, but includes Koek’s way of portraying the city. This city is very much a part of our collective memories, memories that Koek keeps vivid, evolving and alive with his indelible images.”

Born in the Netherlands and raised by an Argentinian mother, Koek decided to give up his profession as a tax lawyer in Amsterdam and pursue his passion for photography in New York City. Koek has steadily gained ground on the American scene with assignments for publications such as The New York Review of Books, Interview, Stern and Filmmaker Magazine. In May 2014, one of Koek’s monumental cityscape photograph was installed at the Fotofestival Naarden in The Netherlands and at Photoville, New York City, each time on a 130-foot long fence.

In 2015, Koek’s work was included in a group show, curated by Alex Orlowski, In-Haus (part of NOWNY15) at Jack Studios, New York City.  Koek’s work is in the collections of The National Archives of Holland, The Dutch Ministry of Foreign Affairs and The Royal Tropical Institute of Amsterdam. He has also worked for companies such as Armani, Microsoft, PepsiCo and L’Oréal. He currently lives in Brooklyn, New York.

Senaspace is a premier New York City tattoo studio and art gallery featuring world renown artists; specializing in japanese, traditional and realistic tattoo styles. It is an reflection of David Sena’s lifelong interest in diverse modes of artistic expression, and his conviction that art is not a luxury but a sublime human need. These two means of creating – tattooing and burning – have a unique synergy, as they both entail physical and ritualistic processes of mark-making while transforming matter/people. Senaspace is a unified platform in which both are presented and accomplished, and will also regularly feature expositions, projects and guest spots by local and international artists in all mediums.