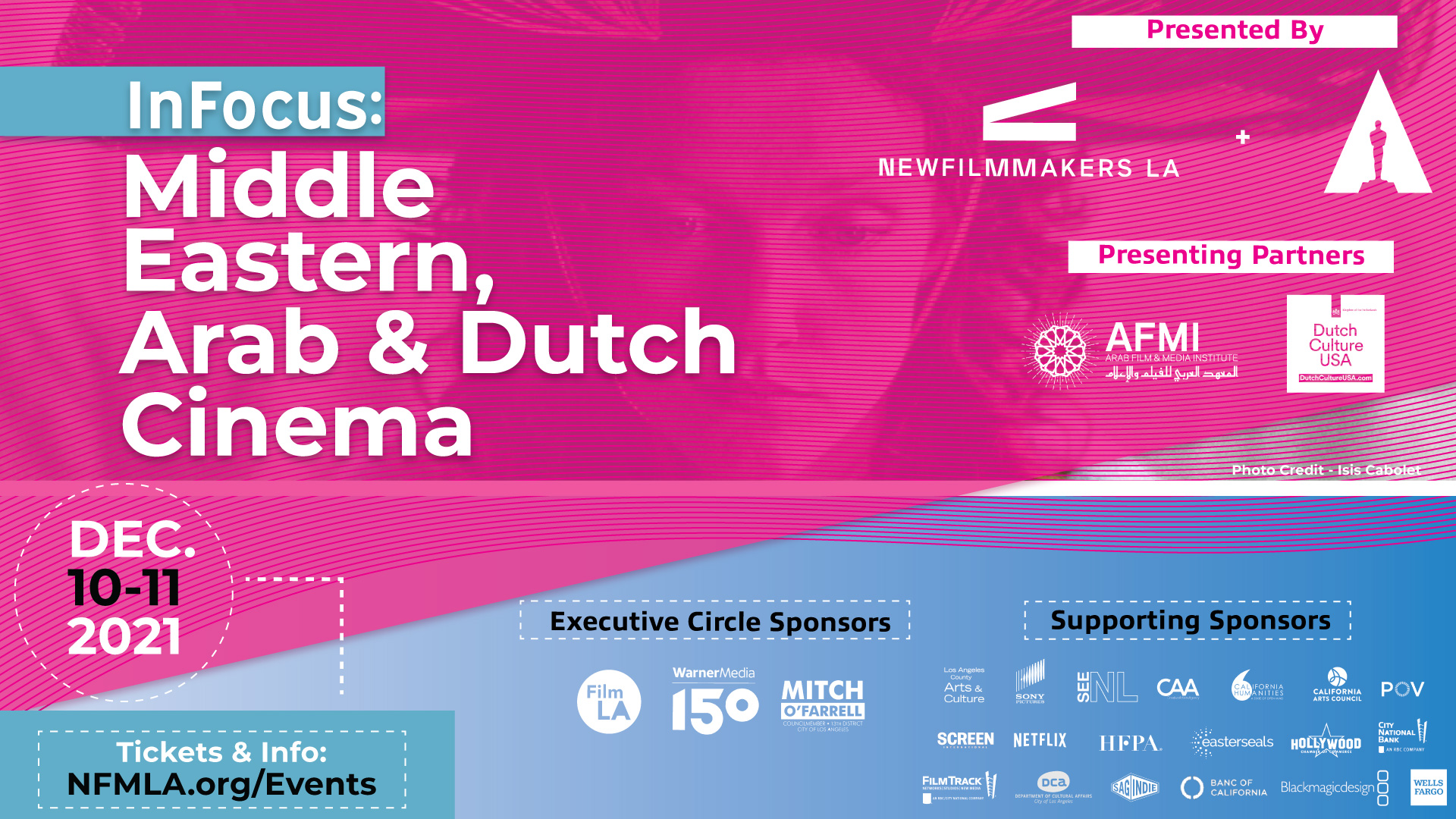 NewFilmmakers Los Angeles (NFMLA) and the Academy of Motion Picture Arts and Sciences (AMPAS) with presenting partners The Arab Film and Media Institute (AFMI) and Dutch Culture USA (Consulate General of the Kingdom of the Netherlands in New York) co-host a virtual edition of the annual NewFilmmakers Los Angeles (NFMLA) Film Festival InFocus: Middle Eastern, Arab & Dutch Cinema program. The weekend will showcase an international lineup of films by talented emerging filmmakers across three short film programs. This event will include virtual screenings, filmmaker Q&A’s and industry panels. Each screening will take place virtually and will be followed by a live Q&A. The festival programming is also supported by Los Angeles City Councilmember Mitch O’Farrell (CD13).

The weekend will feature a lineup of stand-out films by emerging talent, with filmmakers and stories from the Netherlands, Lebanon, Palestine, Qatar, Saundi Arabia, United Arab Emirates, Egypt, Jordan, Iran, France, Belgium and the United States.

The weekend’s film programming begins on Saturday with InFocus: Dutch Cinema, a compelling and thoughtful collection of exciting work from up-and-coming Dutch short film directors curated in partnership with See NL. This year’s selection dives deeply into themes of loss and resilience, and includes the US premiere of the latest work by NFMLA alum Thessa Meijer, whose last film was the Dutch submission to the 2020 Academy Awards, as well as the North American premiere of new work by 2006 Dutch Academy Award entry director Remco Polman.

Next in the day’s line-up is InFocus: Arab Cinema, an exciting program of short films curated in partnership with The Arab Film and Media Institute (AFMI) that showcases Arab storytellers from across the world, featuring vivid stories of personal struggle, familial bonds, emigration and profound loss. The selection includes both this year’s Saudi Film Festival Winner, Egg Rebelled by Sultan Rabea, as well as celebrated new work by Student BAFTA shortlisted director Ramiel Petros.

The night concludes with InFocus: Middle Eastern Cinema, a selection of short films from Middle Eastern filmmakers who have made their work all over the world – the UAE, Jordan, Iran – as well as in the US. They tell deeply meaningful stories of reconnection, generational strife, the horrors of war, and the human impact of the pandemic. The block includes the Tribeca award-winning short Layak, by co-directors Scott Aharoni and Dennis Latos.

NFMLA showcases films by filmmakers of all backgrounds throughout the year, across both our general and InFocus programming. All filmmakers are welcome and encouraged to submit their projects for consideration for upcoming NFMLA Festivals, regardless of the schedule for InFocus programming, which celebrates diversity, inclusion and region by spotlighting communities of filmmakers within our filmmaking community as part of our monthly program.

All times listed are in Pacific Standard Time (PST).

Zoom links to the Q&As will be sent an hour prior to each start time.

Recordings must be requested and aren’t guaranteed.

Get your tickets here: https://dec2021.eventive.org/welcome