Through June 26, Rotterdam-based artist Niels Post will be part of a group exhibition at Transmitter Gallery in Brooklyn, NY. It will be Post’s first exhibition in New York in over a decade.

Through June 26, Rotterdam-based artist Niels Post will be part of a group exhibition at Transmitter Gallery in Brooklyn, NY. It will be Post’s first exhibition in New York in over a decade.

“Not Invited…” presents four artists – Niels Post, London Kaye, Victoria Scott and Emmanuel Sevilla – who blur the boundaries between the interior and exterior of the gallery, making work inspired by the urban spaces that surround us, as well as artworks that inhabit those spaces, hiding in plain sight.

Outside the gallery, these artists engage in unsolicited collaborations with the public space of the ever-changing city. Unmapped, these works can only be discovered in their environments by those seeking them or stumbling across them. The artists insert their work into the urban landscape to contrast with what already exists or highlight what is commonly overlooked. The public space creates the possibility for an open and democratic environment where art can be not only seen, but also shared, stolen or destroyed. 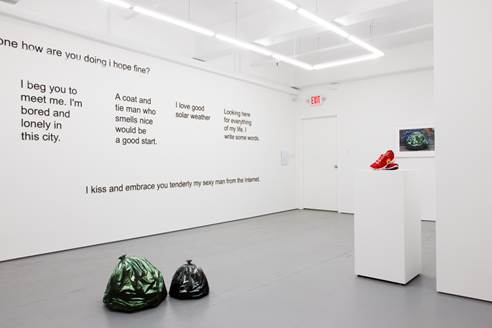 A central theme in Niels Posts’ work is the creative use of public space. The Dutch artist’s work is primarily conceptual and incorporates materials like wood, vinyl, video, steel, and gold. On the longest gallery wall Post will create a site-specific piece, approximately 25 feet. “On Spam, Love #9-#15″ is part of Post’s ongoing “On Spam” project, which began when he was inspired by texts found in dating spam messages, that, when read together, create a poetic narrative. In addition, Post will install a selection of his “On Spam: Business Proposals” on vacant storefront windows in the surrounding boroughs.

A limited edition zine with poster, documenting past and present installations of unsolicited public works, will accompany the show. It will be printed in a variant edition, with each artist contributing a poster, and will be available on a pay-what-you-wish model.

Niels Post lives and works in Rotterdam, the Netherlands. He is not only a visual artist but also a curator and art blogger for Trendbeheer. Spam messages are his main source of inspiration. Texts about love and business, computer-generated mails which nobody actually reads and yet which are ubiquitous. Post implements the words in his own product, leaving the texts as they were: spelling and grammar faults included. Here, seperate parts of digital waste are being recycled into new sentences: “I am very happy that you have answered my shout of lonely heart” or “i am prepared to share the money with you in half.” In short, Post’s work offers a humoristic and critical perspective on the Internet.

Transmitter  is a collaborative curatorial initiative based out of Brooklyn New York, focusing on programming that is multidisciplinary, international and experimental.  The Gallery was founded in 2014 by Dutch artist Rob de Oude and Carl Gunhouse, Sara Jones, Rod Malin, Tom Marquet and Mel Prest. In October 2015 Jen Hitchings joined the curatorial team.