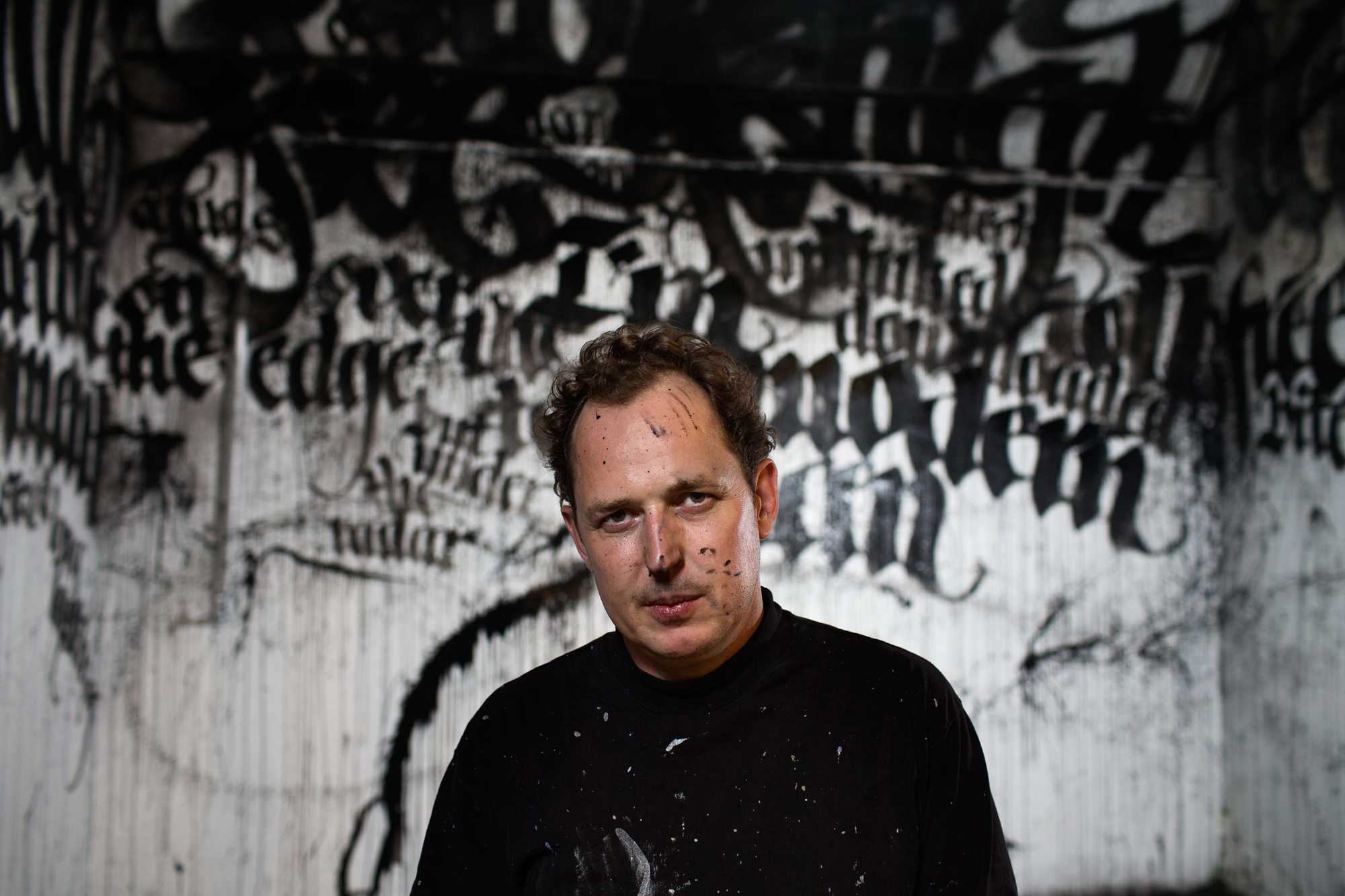 White Walls is pleased to present Unism, the latest solo show by internationally acclaimed Niels ‘Shoe’ Meulman. After he coined the term Calligraffiti to describe his work in 2007, artist Niels ‘Shoe’ Meulman (Amsterdam, 1967) returns to San Francisco with a new phrase and eponymous exhibition: Unism (pronounced un-ism, not u-nism).

According to the designer-turned-painter, Unism incorporates all aspects of his expressionistic work:
Unism is about the power of reversal. For example ‘turning darkness into light’ taken from a monk’s poem that describes both the illuminated letters in medieval scriptures, as well as the wisdom they brought to the dark ages. In those days, some were trying to turn lead into gold, so it’s no coincidence that I use lots of metallic paints.

But Unism also refers to modern vocabulary in which we find many new words like ‘unlike’, ‘unfollow’ and ‘undo’. I’ve been painting my signature repetitive strokes for years now. This started as a practice to get my hand, wrist, arm and body in the right flow. It became somewhat of a meditative act. The uncanny thing was that four of these strokes actually make up the letters ‘u’ and ‘n’. Since my graffiti days I realized that every word is also an image and that writing can be painting.

I’ve been working with the word ‘unruly’ for years, which basically is a reaction to our overly-regulated society. That ended up in the throwing of paint bombs which contrasted nicely with the grid-like fields of the repetitive strokes. It ties into the ultimate example of my reversal theory; order and chaos.

Especially for this exhibition a 1984 Cadillac Fleetwood limousine will be transported from New York City to San Francisco. This six-door limo was painted by Niels ‘Shoe’ Meulman and presented at the notorious Wynwood Walls during Art Basel Miami 2012. The hood, trunk and other pieces will be sold as separate pieces during the exhibition.

Also on display during the exhibition: As a tribute to the game, Meulman will create a series of Calligraffiti works to fill the Shooting Gallery Project Space depicting various baseball terms painted with official umpire’s brushes. Unusual tools are standard practice for Meulman, who has used brooms to paint all over the world, from the streets of Singapore to the floor of a boxing ring for Louis Vuitton’s tribute videos to Muhammad Ali. Using traditional wooden plate brushes, the Dutch artist honors America’s favorite pastime with a sweeping elegance. And what better place to do this than in the World Series-winning San Francisco?

Born in Amsterdam in 1967, Niels ‘Shoe’ Meulman (NSM) is an internationally known artist, designer, and art director. NSM began tagging in 1979 with the moniker ‘Shoe,’ and quickly became a graffiti legend before his passion for lettering lead him to apprentice under the Dutch graphic design master, Anthon Beeke, and to later run his own Design Company. In 2007, NSM revolutionized the art of writing with an exhibition showcasing his fusion of calligraphy and graffiti in a style he fittingly termed ‘Calligraffiti.’ Widely acclaimed, NSM’s designs and artwork are in the permanent collections of Stedelijk Museum in Amsterdam and The San Francisco Museum of Modern Art.