From July 14th until August 18th, a series of paintings by Dutch artist Niels Shoe Meulman “New Shoes” will be exhibited in a two-person show at Tinney Contemporary Gallery, Nashville, TN. The exhibition will also feature new work by American artist Cecil Touchon.

During the month of May, Niels Shoe Meulman spent his time in the birthplace of graffiti, New York. Here, Shoe worked on a new series of paintings titled “New Shoes”. A series of 11 paintings in total, which are all variations on the same calligraphic composition. The paintings are both planned and experimental, painted with acrylic, reflective flakes and ink on primed raw linen.

“Even though I am naturally drawn to artists like Soulages and Hartung, here in New York the ghosts of Rammellzee, Basquiat and Warhol are omnipresent. When I started painting the series, I was reminded of the beautiful drawings Warhol did of shoes. The individual titles are a reference and tribute to him. I even have a tattoo of one, which says ‘to shoe or not to shoe.'”

Niels Shoe Meulman (1967) is an internationally known artist, born, raised and based in Amsterdam. He began tagging “Shoe” in 1979 and became a graffiti legend by the time he was 18. In the 1980s he met New York artists like Keith Haring. He then formed the Crime Time Kings with Bando from Paris and Mode2 from London. Together they gave graffiti in Europe its own distinctive style. In the years after, he ran his own design company, Caulfield & Tensing and was partner in advertising agency Unruly, which he later turned into brand for silk scarves and a gallery. 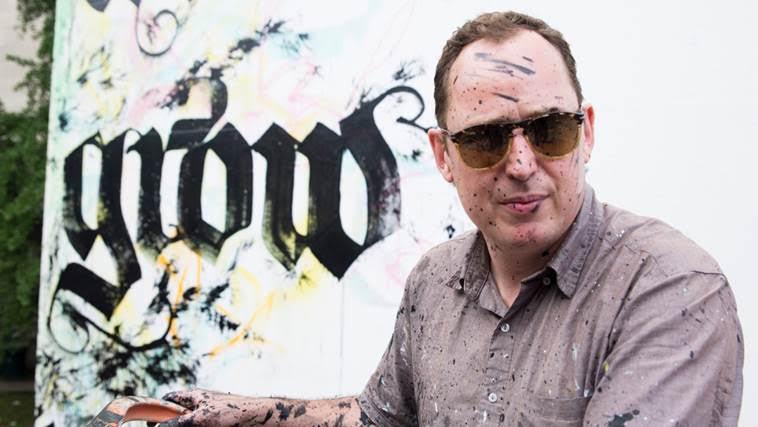