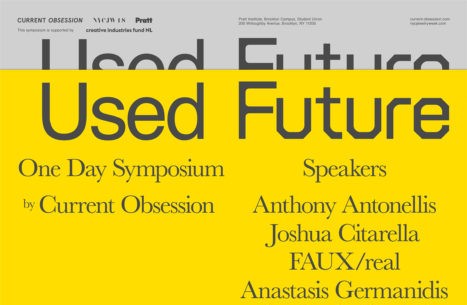 The Netherlands-Based jewellery magazine and platform Current Obsession is hosting a one-day symposium on the “used future” of jewellery at the Pratt Insitute on the Brooklyn Campus in New York City this November 12th.

George Lucas called it the “used future.” He created an image of a lived-in, used-up, dingy and dirty world where obscure objects, oil-stained furniture, and beat-up technology look like they came from the opposite sides of the galaxy.

To create an altogether more credible image of the future—where young and ancient civilizations coexist, feeding off of each other—CGI artists and animators spend tremendous effort denting, burning, and bending surfaces of their pristine computer-generated spaceships. They know that whatever it is that viewers see on their screens, no matter how far removed from anything “real”, needs to be deeply rooted in our experience of objects and matter.

For a moment, let’s allow the free-floating animated spaceships tickle our collective imagination, and look closely at the things that are deeply embedded in our history, identity, and self-expression. Things like jewellery.

Historically, the entire value system of jewellery is based on its materiality and its tangibility. Seen as an investment, it is above all a possession—an object to own, to hold, and to inherit. But how does this value system play out when the materiality of a work is taken out of the equation? What happens when jewellery becomes digital, existing in an entirely different realm, taking on a life of its own?

This may seem like a speculative scenario, but the existence of screen-bound jewels raises all kinds of very real questions:

What is ownership and what is authorship? What is uniqueness? What is luxury? What is wearability and materiality? 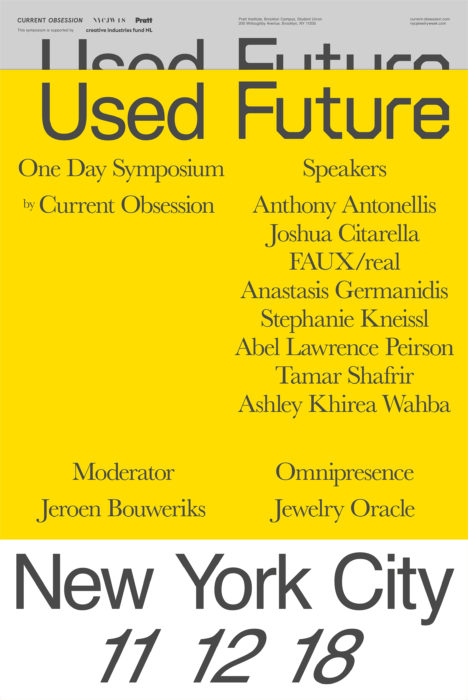 An oily fingerprint depicted on the perfect facet of a rendered diamond, a curly hair stuck in the prong of a 3-D–rendered ring, a deep scratch on the smooth surface of digital metal, or a tiny stone missing from a geometric binary pavé …

If it takes a thoughtful representation of “old” and “new” objects welded-slash-copy-pasted from the opposite sides of the imaginary galaxy to convince the viewer to accept a far-fetched utopian scenario, perhaps hyper-real renders of jewelry can become a part of our digital and analogue lives, and work to bring these what-if futures into our now.

The Symposium reflects this speculative theme by introducing an innovative way of conducting a group discussion. The audience will be presented with tools to give feedback and influence the discussion in real time, digitally expressing their emotions: love, like, confused, dislike, etc. The group discussion will also be joined by a chatbot designed by Current Obsession to represent the collective knowledge about jewellery – The Jewelry Oracle.

The Symposium will look into what defines authorship and authenticity in today’s digitalized world, when social content, images, memes, and quotations get dispersed to and by the masses? If we can think beyond the notion of copyright and ownership, what opportunities does this really entail for (post-digital) artists and designers?

This experimental event is designed to maximize the ‘mind-mining’ of the invited experts, to discover and to imagine what these questions could mean for jewellery. Transposed over the traditional “social club” set up – a horizontal conversation between the moderator, invited speakers, and the public – the experience will receive new, digital layers. The generated content will serve as a starting point for the next issue of Current Obsession Magazine.

In the first panel, we meet an interesting combination of jewellery designers, artists and theorists whose approach to the subject matter come from different galaxies. Topics feeding the discussion include dispersion, representation, appropriation, plagiarism, file sharing, and inauthenticity.

Visual artist who lives in New York. He is a graduate of MIT Media Lab, and has been a resident at Eyebeam, a Fulbright fellow, has been featured in New York Times, Huffington Post and won many major awards. He was exhibitied in venies such as MoMA, the Whitney Biennial, the New Museum of ARCO Madrid. His works are collected by major institutions and written about in publications such as Art Forum. He is a professor of media arts and lectures frequently on digital art.anthonyantonellis.com

An artist working with both sculptural materials and software. His work positions photography at the nexus of an interdisciplinary practice, relegating all mediums to source material awaiting digital image capture. Today’s image editing tools allow for the transformation of signs and their associated meaning on an unprecedented scale. In Citarella’s practice the photograph of one object may be repeatedly altered until it is unrecognizable. RGB pixels – the red, green and blue lights used to display images on screens – are used as a new ‘prima materia’, releasing objects from the dim confines of materiality into omnipresent electronic radiance. Citarella describes how “we lose sight of the interface and are carried away in the fervour of a transcendent promise fulfilled.” joshuacitarella.com

Writer and researcher in the extended field of design (including architecture, visual culture, technology, and fashion). She lives in Rotterdam, the Netherlands. She was born in Israel and grew up near Washington, D.C. She studied architecture at the University of Virginia and contextual design at the Design Academy Eindhoven. She currently teaches at the Design Academy Eindhoven as co-heads (with Agata Jaworska) of the Design Curating & Writing master’s programme and thesis advisor in the Contextual Design and Social Design master’s programmes. tamarshafrir.com

Mari Ouchi and Louis deCicco of FAUX/real – New York/Berlin based design duo Louis deCicco and Mari Ouchi are making more than jewelry/objects since 2009. They are making pieces that you can think and talk about. Unexpected materials transformed into pieces with surprising grace and vision. They try and challenge people’s eyes/mind through their work with a very thoughtful touch and a twist in sense of humor. FAUX/real positioned themselves on a fine line between the fields of art/ design/fashion/interiors/architecture. They don’t necessary belong to any of them but satisfy all. Numerous successful collaborations in those fields make them continue their experiential journey for the next… the new FAUX/real.
fauxrealnyc.com

In the second panel, we will collectively examine a future scenario that could be post-human or human. What happens if the algorithm (or machine) takes over, leaving the designer out of the equation? Will we become designosauruses? In this session we will share our thoughts on Artificial Intelligence, machine- and deep-learning, and what this means for “the maker.”

Germanidis is an artist and engineer. His projects explore the effects of new communications technologies and artificial intelligence systems on personal identity and social interaction. His artwork has been shown internationally across the US and Europe, including at Ars Electronica Export, Cannes NEXT, and CPH:DOX, and featured in The Telegraph, WIRED, NRC Handelsblad, The Irish Independent, and Mashable, among other places. His recent project Antipersona was one of Wired UK’s Best Apps of 2016. He’s happiest when he works in public and hopes to one day have every part of his behavior and personality be generated by computer programs that he’s written. agermanidis.com

She is a designer based in Vienna. Her work explores the future and how the world is changing in the 21st century through technology and its impact on our rituals, habits and culture. Recent exhibitions include ‘All I know is what’s on the Internet’, The Photographers Gallery, London, 2018; ‘Separate Togetherness – A Virtual Meal’, Vienna Design Week, 2018; ‘Robots, Work, Our Future’, Vienna Biennale, 2017 and ‘Are We Human? Visualising Emotions’, Design Biennale Istanbul, 2016. stephaniekneissl.com

He is a Ph.D student in Physics at Stanford University currently working on theoretical astrophysics under Prof. Roger Romani. He graduated in Physics (MPhys) with distinction from University of Oxford in 2017 where he was awarded an Oxford international strategy scholarship to work at CERN on the CLIC electron-positron accelerator and a Christ Church college academic scholarship. His research interests include astrophysical jets and shocks, theoretical neuroscience, applications of machine learning. He has recently been featured on the NVIDIA AI podcast, TechCrunch and AINews for Dank Learning, a meme-generating AI powered app. alpeirson.com

Egyptian-American artist and jeweler from the NYC area. Her current studio work explores notions of identity, ownership, agency, and reclamation, often in direct response to memetics. She’s interested in the role of reference culture and how layers of signaling manifest as a language that traverses URL and IRL. ashleykwahba.com

Jeroen Bouweriks – is an anti-disciplinary artist based in Amsterdam. Collecting, gathering, arranging and creating significance are basic values for his work. He operates and researches in the crossover between diverse media and is acquainted with teaching and lecturing in art/design practice.

Jewelry Oracle – superimposed onto both discussions is a chatbot comprised of collective knowledge on jewellery. It embodies a multitude of opinions, voices, facts, and speculations in an ever-growing archive; this knowledge is rooted in art history books, magazines, poems, songs, and interviews with artists.

Current Obsession offers new ways of presenting and experiencing jewellery through its experimental approach and unconventional style. They develop curatorial projects and events for renowned brands and cultural institutions in collaboration with exceptional jewellery designers and artists.