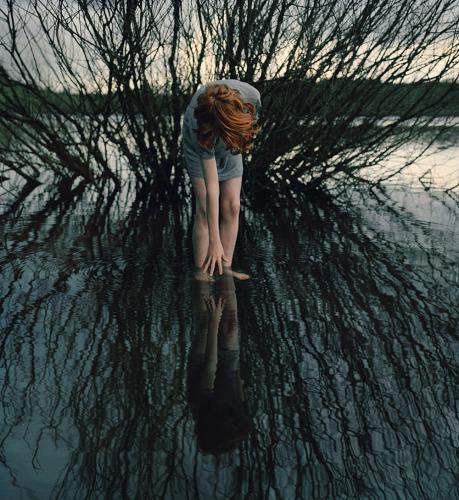 P.P.O.W. presents a solo booth of new work by Dutch photographer Ellen Kooi at The AIPAD Photography Show, New York from April 10-13. This new collection of work expands upon Kooi’s interest in traditional Dutch landscape painting. Kooi’s dreamlike narratives are laden with art historical and literary references and possess a heightened sense of emotional tension expressed through the relationship between the character and his or her surroundings. These panoramas blur the distinction between fantasy and memory, creating a world that is at once surreal and familiar.

Kooi’s large-scale, theatrical photographs are carefully orchestrated using detailed prep sketches and thoughtful set design. Her photographs are created during daylight with large format cameras, intricate lighting and minimal post-production editing. Shot in the countryside surrounding the artist’s native Haarlem, the title of each work is drawn directly from the name of its location emphasizing the close ties between landscape and subject.

Among the works on view will be Langerak – Blauwe Boom, 2014 which portrays a young female in a tree. Created using a palette of muted greens and neutral hues with saturated bursts of color, the image evokes childhood fairytales with cinematic audacity. Langerak – Blauwe Boom possesses a perfect stillness that leaves the viewer with a feeling of foreboding. While the subjects of Kooi’s panoramas may appear to be at the mercy of their surroundings, a closer look at the work reveals that the landscape, too, is responding to its inhabitants. These displays of nature can be interpreted as a reflection of the subject’s inner turmoil.

Ellen Kooi was born in 1961, Leeuwarden, the Netherlands. She attended the Art Academy ABK Minerva in Groningen and has been a resident of the Rijksakademie in Amsterdam. She has exhibited throughout Europe and the United States. A solo show of her work is currently on view at the Galerie Les Filles du Calvaire in Paris, France. Her work has also been shown at The Museum of Contemporary Art in Cleveland and in the Photography Biennale in Moscow. She lives and works in Haarlem, the Netherlands.

P·P·O·W was founded by Wendy Olsoff and Penny Pilkington in the first wave of the East-Village Art Scene in New York City in 1983. In 1988 the gallery moved to Soho and in 2002 moved to Chelsea. P·P·O·W maintains a diverse roster of national and international artists. Since its inception, the gallery has remained true to its early vision, showing contemporary work in all media. There is a commitment to representational painting and sculpture and artists who create work with social and political content.

About the AIPAD Photography Show

The AIPAD Photography Show New York, one of the world’s most highly anticipated annual photography events, will be held at the Park Avenue Armory. Presented by The Association of International Photography Art Dealers (AIPAD), the fair is the longest-running and foremost exhibition dedicated to the photographic medium. More than 80 of the world’s leading fine art photography galleries will present a wide range of museum-quality work, including contemporary, modern, and 19th-century photographs as well as photo-bases art, video, and new media.