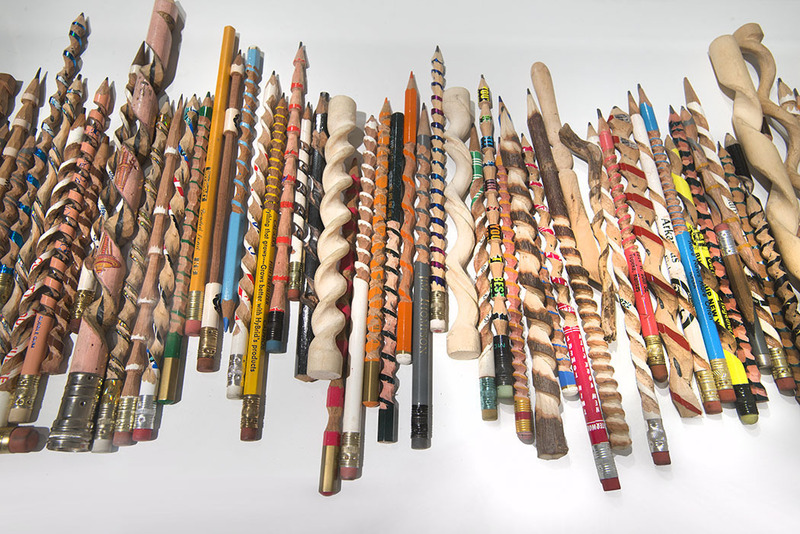 Peter Schuyff participates in the Whitney Biennial 2014 at the Whitney Museum of American Art from March 7 until May 25, 2014.

Dutch artist Peter Schuyff participates in the Whitney Biennial 2014 at the Whitney Museum of American Art from March 7 until May 25, 2014.

Peter Schuyff makes the carvings on view in the Biennial by holding a knife in place and rhythmically moving a pencil along its edge—all without looking at what he’s doing. This practice functions as a meditation that the artist engages in when he tires of working on the geometric abstract paintings for which he is perhaps better known.

The Dutch-born Schuyff began creating similar carvings during a hiking trip through the jungles of Papua New Guinea in the early 2000s. Sitting in total darkness, he spent the nights whittling intricate patterns into small sticks. When he returned to New York, he began engraving patterns into pencils while watching television. The artist has also hewn baseball bats and logs into similar corkscrewing shapes.

Schuyff says “Well, the pencils, they really are just something to do with my fingers. I have very busy, busy fingers..

As a painter, at least once a year I thought to get absolutely as far away from painting as I possibly could. On one of those occasions I ended up in the highlands of New Guinea, really weeks’ walk from civilization. And at night I really didn’t have much to do, and there wasn’t a lot of light, so I carved these pencils. Every night I would make a stick and then in the morning I would climb a tree, bore a hole, and stick the corkscrew shaped sticks in these holes.

When I got back to New York, I had really nothing else to do. I was still basically as far from painting as I could possibly get. That kind of came hand in hand with a moment of great insecurity. And one of the things that I thought about with these pencils was, it could almost be a form of busking. I could almost imagine myself in some post-apocalyptic landscape. You know sitting on a street corner and making those for a couple of bucks a piece.”

About the Whitney Biennial 2014

The 2014 Whitney Biennial will take a bold new form as three curators from outside the Museum—Stuart Comer (Chief Curator of Media and Performance Art at MoMA), Anthony Elms (Associate Curator at the Institute of Contemporary Art, Philadelphia), and Michelle Grabner (artist and Professor in the Painting and Drawing Department at the School of the Art Institute, Chicago)—each oversee one floor, representing a range of geographic vantages and curatorial methodologies.

Donna De Salvo, Chief Curator and Deputy Director for Programs at the Whitney, noted: “The 2014 Biennial brings together the findings of three curators with very distinct points of view. There is little overlap in the artists they have selected and yet there is common ground. This can be seen in their choice of artists working in interdisciplinary ways, artists working collectively, and artists from a variety of generations. Together, the 103 participants offer one of the broadest and most diverse takes on art in the United States that the Whitney has offered in many years.”