Pieter Paul Pothoven’s exhibition ’11:59, on a date of no particular significance’ 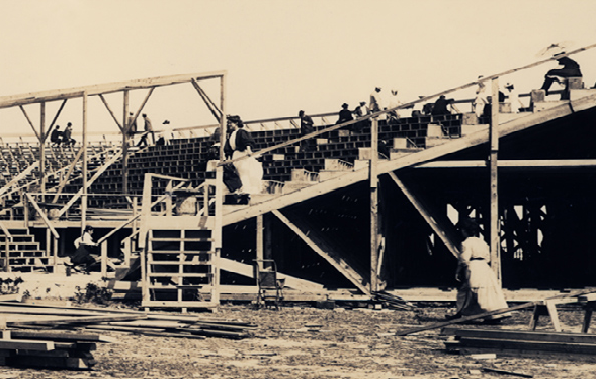 From February 19-26, 2014 the Hudson D. Walker Gallery in Provincetown presents the exhibition '11:59, on a date of no particular significance' from Dutch artist Pieter Paul Pothoven.

From February 19 until February 26, 2014, the exhibition ‘11:59, on a date of no particular significance‘ of Dutch artist Pieter Paul Pothoven is on show at the Hudson D. Walker Gallery in Provincetown. The opening reception will take place on February 21, 6-8pm and there will be a collective reading at 7pm.

During the exhibition, ’11:59, on a date of no particular significance’, Pieter Paul Pothoven presents his research into the Pilgrim Monument in Provincetown, MA, which commemorates the first landfall of the Mayflower in 1620. Pothoven’s work focuses on the ceremony for the laying of the monument’s cornerstone, which took place in 1907 in the company of President Theodore Roosevelt.

An inconspicuous yet telling photograph from the Pilgrim Monument’s archives shows the construction site of the monument just days before the inaugural ceremony: a near-completed grandstand and stage on Town Hill with groups of curious onlookers laughing and conversing. The atmosphere is informal, a contrast to the official ceremony about to take place, where President Roosevelt would inaugurate the construction of the tallest all-granite structure in the United States.

The photograph of Town Hill represents the moment just before the ceremony, before the past was solidified into a monolithic gesture, before Roosevelt’s formal language composed the past and locked it in the event’s historic documentation. Pothoven takes three objects from the ceremony that facilitated speech- the grandstand, Roosevelt’s pen and a copper time capsule embedded in the cornerstone, and charges them with new language.

’11:59, on a date of no particular significance’ aims to resuscitate the fleeting, informal setting in the photograph, the moment before the past was sealed. Pothoven wishes to redefine an image of the past that is intimate, dynamic and inclusive to challenge the reductive reading that still dominates Provincetown’s horizon today.

Pieter Paul Pothoven is currently a visual fellow at the Fine Arts Work Center in Provincetown, MA. In October 2014, he will begin a residency at the Jan van Eyck Academie in Maastricht, the Netherlands

Pieter Paul Pothoven earned his BFA from the Gerrit Rietveld Academie in Amsterdam and his MFA from Parsons The New School of Design. His work and screenings have been shown in solo and group exhibitions in the United States and across Europe, and have been published in a number of journals in New York and Amsterdam. Pieter has also had residencies in Afghanistan, Lebanon, Israel and Belarus, and has received several grants in the United States and the Netherlands.