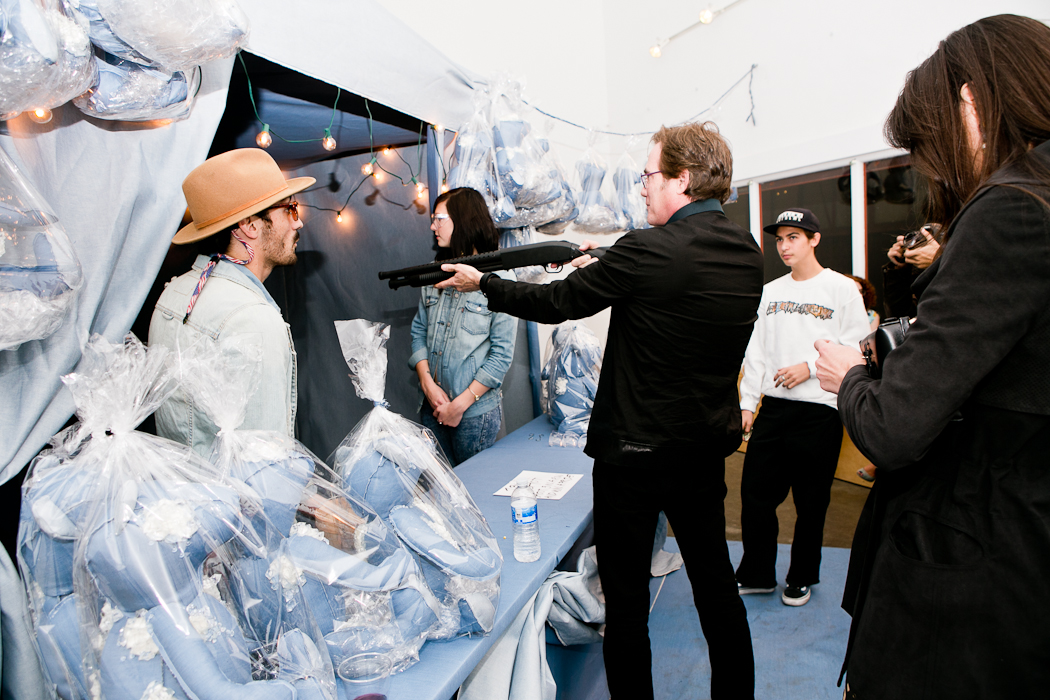 European multi-media artists Pinar&Viola are having their debut show in the US and they’re coming out with a bang. Their show “Blue Jeans On Thin Ice” is an interactive installation that shines a light on the handgun violence issues we face in America. They will create a dome and shooting gallery entirely out of denim and people will not buy the art, but shoot with a rifle to win it. The prize, or artwork in this case is a custom made denim teddy bear. They’ll have a total of 62 teddy bears symbolizing the amount of mass gun shootings that occurred in the US since the year Pinar&Viola were born.

“We find it such an imminent, important subject and we are surprised that due to the traditional narrow-mindedness of the country and the established gun companies that the country keeps on failing to take action.” – P&V

The exhibition suggests a ground where people are free to satisfy their shooting needs, in a fantasy fun fair format, while not harming anyone. They decided to take jeans as a metaphor and obsessively cover the gallery because they find gun and jeans are both democratic. “One represents the American dream and the other America’s nightmare.”

As an eclectic young duo, coming from Istanbul and Amsterdam, currently living in Paris, they live, reflect and initiate fast changing trends in their practice. This made them become today’s experts of avant-garde image creation, working with galleries, publications and institutions who are the leaders in their line of expertise.

KK Los Angeles is an outlet for renowned artists to explore new stories, aesthetics or mediums they cannot usually exhibit in a commercial gallery space. Work that is meaningful to the artist and to people who love art and really good stories. KK Los Angeles is located in Los Angeles’ Chinatown Arts District and has a sister gallery in Hoxton Square, East London.