On May 26, Pioneer Works presents Sci Con, a series of conversations between scientists

Scientific Controversies, or Sci Con, is a a series of conversations between scientists hosted by PW Director of Sciences Janna Levin.

Kick off Memorial Day Weekend with Scientific Controversies 11! Expect a “consciousness bonfire” in the garden until late, telescopic views of the summer sky, and general Memorial Day good vibes.

Experientially, consciousness is a subjective, internal movie, a virtual reality of the mind – the most elaborate virtual reality, replete with images, sounds, smells, tactility, memories. Conscious entities can invent, imagine, visualize and dream. The existence of consciousness seems to qualify as a scientific fact. After all, I observe my own consciousness. But is the observation just an illusion? Is consciousness reducible to elementary biology? Or is consciousness itself somehow fundamental or even universal to every material thing?

There will be beer and wine to alter your consciousness and Hometown Bar-B-Que will have old-fashioned Memorial Day grub for sale in the garden.

On display from 7-11 PM: Mutual Wave Machine by Matthias Oostrik and Suzanne Dikker. In collaboration with Peter Burr, Diederik Schoorl, and Pandelis Diamanti. 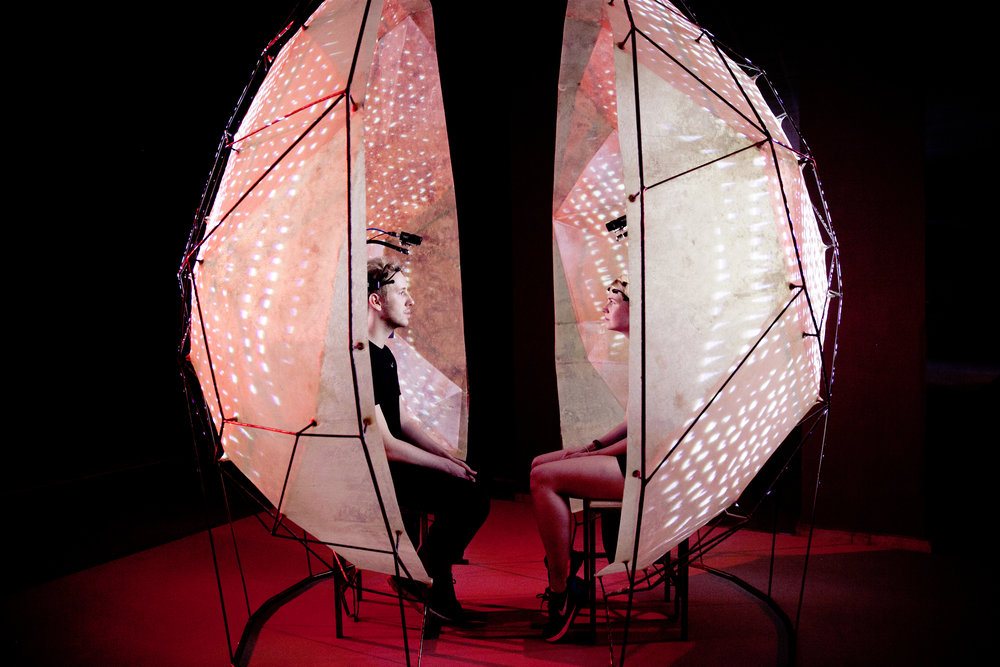 Oostrik and Dikker’s collaborative work the Mutual Wave Machine is an interactive neurofeedback installation. Enclosed by an intimate capsule and immersed in an audiovisual environment that responds and reflects their shared brain activity, two visitors can directly experience and manipulate their internal efforts to approach or distance themselves from each other.

Suzanne Dikker’s research merges cognitive neuroscience, education, and performance art in an effort to understand the brain basis of human social interaction. Together with media artist Matthias Oostrik and other collaborators from both the sciences and the arts, she uses portable EEG (emotiv) in a series of crowd-sourcing neuroscience experiments / interactive brain installations that investigate the role of brainwave synchronization between two or more people in successful communication.

Pioneer Works is a non-profit cultural center dedicated to experimentation, education and production across disciplines. Through a broad range of educational programs, performances, residencies and exhibitions, Pioneer Works transcends disciplinary boundaries to foster a community where alternative modes of thought are activated and supported. We strive to make culture available to all.