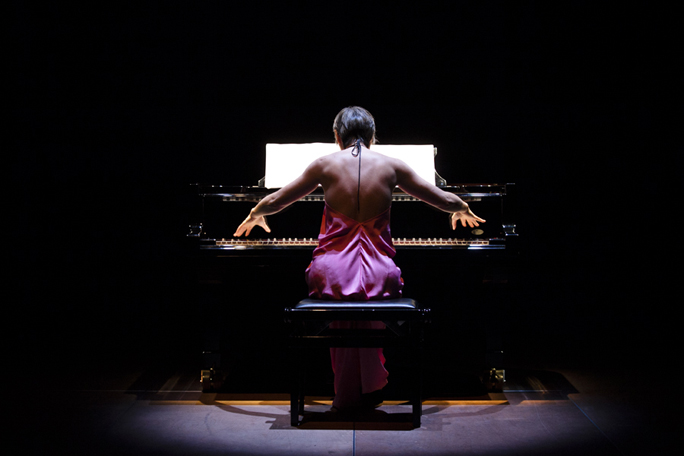 The Unmentionables Film Festival will screen a film about Tomoko Mukaiyama‘s visual art installation “Wasted” with a small concert afterwards on June 19 from 7:00pm  – 10:00pm at the  Speyer Hall at University Settlement.

Director Aliona van der Horst, Netherlands, 2011, 75m, Documentary
Water Children follows the unconventional Japanese-Dutch pianist and visual artist, Tomoko Mukaiyama, as she explores the miracle of fertility and the cycle of life, by constructing “a cathedral” out of 12,000 white silk dresses in a village in Japan.  Mukaiyama’s installation elicits confessions from its normally reticent Japanese visitors, many of whom have never seen art before, and in moving scenes they open up about previously taboo subjects.

The screening is followed by a live performance and conversation with film subject Tomoko Mukaiyama and a reception. Watch the Trailer and buy your tickets here.

Tomoko Mukaiyama is a Dutch-Japanese pianist, performer and visual artist based in Amsterdam. She studied piano in Tokyo, Indiana (US) and Amsterdam, after which she made her concert debut in 1990. A year later she won the prestigious Dutch Gaudeamus competition.
As a pianist, Tomoko is praised for her vivid interpretations of historical as well as modern compositions. Many prestigious orchestras and ensembles throughout the world have engaged her, including the Ensemble Modern in Frankfurt, the London Sinfonietta, the Ensemble Intercontemporain and the Royal Concertgebouw Orchestra. Tomoko’s unique approach to the piano has inspired many composers, such as Louis Andriessen, to write new work for her.

Dutch director Aliona van der Horst has directed five international award-winning documentaries.  She was born in Moscow, Russia, in 1970 and studied Russian literature at the University of Amsterdam and film at the Dutch Film and Television Academy. She began her career in 1997 with the much-acclaimed The Lady with the White Hat and since then has received multiple awards for most of her films, among them the Special Jury Prize at the Tribeca film festival 2006 for Voices of Bam (co-directed with Maasja Ooms), the Grand Prix of the FIFA Montreal 2004 for The Hermitage Dwellers.