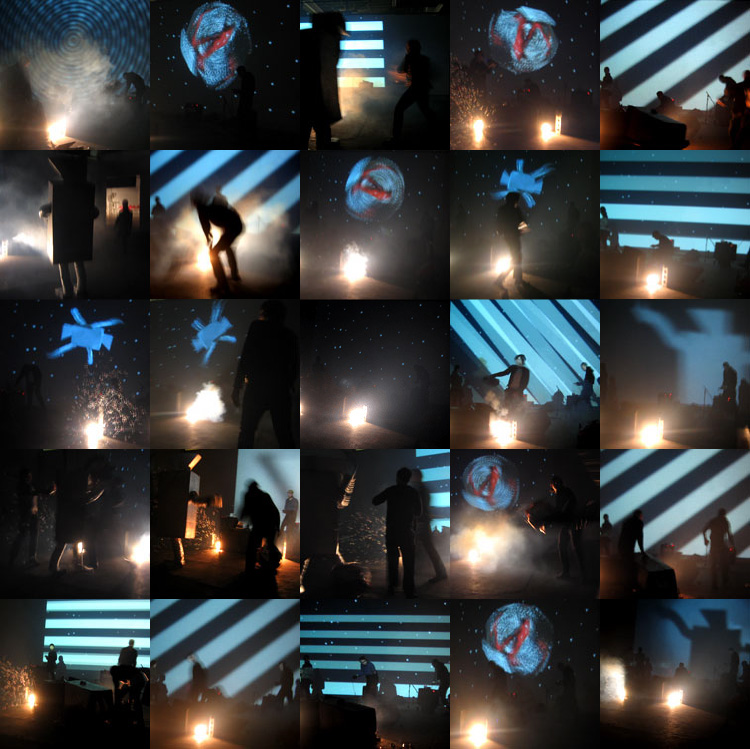 On Friday, November 8, 2013, 8pm, MOCAD is honored to present a rare appearance by Extended Organ (Paul McCarthy, Fredrik Nilsen, Joe Potts, and Tom Recchion), a supergroup of experimental sound artists whose members are culled from the ranks of the seminal West Coast noise cult known as Los Angeles Free Music Society (LAFMS). The members of Extended Organ have been improvising with sound for over two decades. Opening is the Detroit collective Princess Dragon Mom, including Dutch artists and curator Ronald Cornelissen, celebrating their 20th year of noise-making and performance-staging.

Extended Organ is Tom Recchion, Joe Potts, Fredrik Nilsen, and Paul McCarthy with Alex Stevens. Mike Kelley was a longtime member of the group and continues to be a contributing member by virtue of the sound recordings he provided to the group before his death: “in case I can’t make a gig, I can still play.” Tom, Joe and Fredrik are founding members of the seminal West Coast experimental noise cult collective, the Los Angeles Free Music Society (LAFMS).

The roots of the LAFMS trace back to 1972 when disparate groups of improvising sound experimenters in eastern Los Angeles discovered their mutual interest and banded together to design modes of self production and distribution of recordings and publications, helping to develop and propel the DIY moment. Paul McCarthy began collaborating with the LAFMS in the late 70’s and has been an integral participating supporter since the mid 90’s.

Formed in 1994, Extended Organ produce a dynamic otherworldly ambience that can be simultaneously hilarious and ominously frightening. Overlaying the carpet of sound produced by Joe Potts and his self-engineered drone instrument, the “Chopped Optigan” is Paul McCarthy’s vocal and guitar improvisations channeled and processed by Alex Stevens. Tom Recchion, simultaneously renowned as an inventor of crude homemade instruments and as an innovative composer of electronic and tape music, performs an array of sounds blending lush beauty and horror sensibility into the matrix. An antique Rheem Mark 7 organ is layered in by Fredrik Nilsen along with electronic sound and the aforementioned recordings provided by Mike Kelley. Mike Kelley’s varied array of sounds are unprocessed mouth generated tugs, gurgles and bubbling masterfully recorded in 2010 by Scott Benzel.

Formed in 1993 in Livonia, Michigan PDM’s founding members came together through employment at the Record Collector, a local used and new strip-mall record store that specialized in avant-garde and off beat music. Kenny Greenbaum (aka Mog aka Kenny Mugwump), Davin Brainard and Warn Defever were the initial crew. Their first recording was The Real Folk Blues produced as a cassette-only release on the legendary Japanese noise label G.R.O.S.S.

Kenny Greenbaum was also the founder of Loudmouth, a Detroit-area punk/metal industrial rock band that landed a deal with Virgin records in 1991, some of whose members went on to form the post-grunge power pop rockers Sponge. In the aftermath of Loudmouth’s dissolution, PDM was formed. Greenbaum was a driving force behind PDM, influenced by William S. Burrough’s Electronic Revolution: punk rock, magic shows and sideshow carnival performance. Kenny’s energetic onstage persona and surrrealist ideas helped to make PDM an exciting and spontaneous factor in the emerging noise underground of the 1990s.

Both Kenny and Davin’s experience in working at a professional Halloween spookhouse paved the way for how PDM would appear and sound as a live act. Several of PDM’s early performances like “The Haunted Tube” , “UFO Doctor” and “Kings of Noise” a 24 hour noise performance were legendary in the Detroit underground. Using homemade props and staging wild wrestling matches, giant robot attacks, Alien autopsies, flaming pee-soaked castles, PDM created outrageous and complex stage effects. They often performed live with old-timer carnival acts and sideshow freaks including hammer-heads, sword-swallowers, flame-throwers and strip-teasers.

Both Kenny and Warn had experience in traditional music performance and recordings. Member Davin Brainard was a 2-D artist who brought in a wise and well-rounded understanding of the musical world and would help establish the loud harsh non-musical output of the band. Brainard would also design numerous logos, posters and flyers for the group in his distinctive bold and bright spray-painting style. The first PDM gig was backing up the Boredoms, a notorious Japanese noise band then touring the United States.

In 1996, the group was invited to perform in Rotterdam again with Destroy All Monsters, who saw each other as brother bands, PDM retaining and carrying on the anarchist and avant-rock mantle of Detroit destructo-noise. Kenny somehow missed his plane ride to Holland, and soon left PDM and Detroit to concentrate on filmmaking and other persuits in South Florida. Later PDM collaborations with Japanese noise artist Koji Tano (1961-2005) founder of M.S.B.R., would bring the band to Japan. Tano was a big fan of PDM and promoted them highly in his magazines and network in Japan. Dutch visual artist and curator Ronald Cornelissen would collaborate himself as an official PDM member in USA shows and would bring the band back to Europe.

The PDM “Noise Camp” performance/festival has been an annual event in the Detroit area for over a decade. Noise Camp is an outdoor summertime free concert of local and invited noise artists that ends with a PDM performance and a watermelon execution. There is a lot of fun and innocence in a PDM concert (most of it designed by Davin and Warn) which is often confused and off-centered by their tendency for destruction, explosions and violence. Later performances have been joined by newer members Cornelissen, Dion Fischer and Jeremy Kallio.