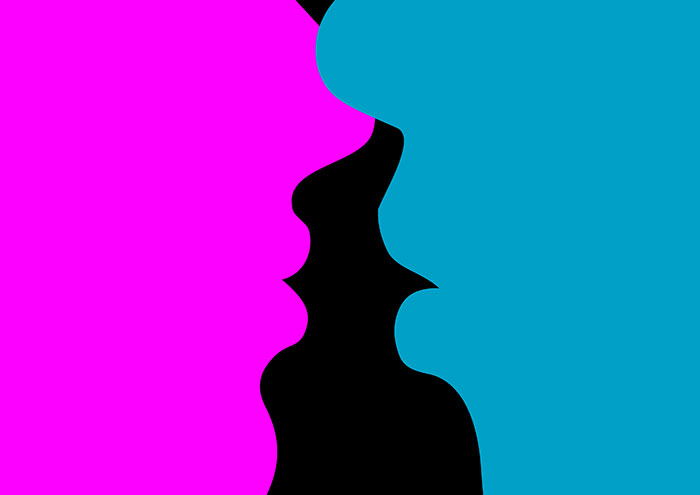 Rafaël Rozendaal’s silhouette of two faces kissing each other, Much Better Than This, will be shown on Times Square’s electronic billboards from 11:57 pm to midnight each night in February.

Artist Rafaël Rozendaal’s gorgeous, color changing silhouette of two faces kissing each other, Much Better Than This, will be shown on Times Square’s electronic billboards from 11:57 pm to midnight each night in February. This project is a part of Midnight Moment, a monthly presentation by The Times Square Advertising Coalition (TSAC) and Times Square Arts.

Rozendaal’s moving image exists online at www.muchbetterthanthis.com and has been viewed by tens of millions of people around the world. The work is privately owned by art collector Almar van der Krogt, but will always remain publicly accessible on the web. A work that immediately resonates during the Valentine’s Day season, Much Better Than This uses simple, powerful imagery to connect with viewers regardless of background, nationality, interests, or education.

Tim Tompkins, President of the Times Square Alliance, said, “Everything from the annual Valentine Heart on Duffy Square to weddings, proposals and vow renewals can be found on the Broadway plazas this February. Rafaël Rozendaal’s stunning piece will be a beautiful kiss to mark a month celebrating Love in Times Square.”

Sherry Dobbin, Times Square Arts Director, said, “Rafaël has distilled hundreds of images of individuals kissing into one symbolic, color-blocking pair that will dominate the atmosphere of Times Square.”

“We’re excited to present the perfect piece for February’s Midnight Moment and help locals and visitors celebrate the month of love.  As Times Square is known to host dozens of  proposals all year round, especially on Valentine’s Day, Rafaël Rozendaal will surely enhance the iconic backdrop this year with this stunning  and timely visual ,” said Harry Coghlan, Chairman of the Times Square Advertising Coalition.

“Times Square is the world’s best place to spread a message and our sign operators are delighted to help Rafaël Rozendaal share his Valentine’s Day message with New York and the visitors from around the world as part of the February Midnight Moment,” said Fred Rosenberg, President of the Times Square Advertising Coalition.

Rafaël Rozendaal, artist, said “Love is an important subject. I hoped that making this work would bring more love to my life and it did. Now I hope that Times Square will be filled with people kissing each other in the heart of a giant city.”

The following digital screens are participating in the February Midnight Moment:

Midnight Moment is the largest coordinated effort in history by the sign operators in Times Square to display synchronized, cutting-edge creative content on electronic billboards and newspaper kiosks throughout Times Square every night. The program premiered in May 2012 and is organized and supported by the Times Square Advertising Coalition in partnership with Times Square Arts, the public art program of the Times Square Alliance, with additional partners of participating sign holders and artists.

Times Square Arts, the public art program of the Times Square Alliance, collaborates with contemporary artists and cultural institutions to experiment and engage with one of the world’s most iconic urban places. Through the Square’s electronic billboards, public plazas, vacant areas and popular venues, and the Alliance’s own online landscape, Times Square Arts invites leading contemporary creators to help the public see Times Square in new ways.  Times Square has always been a place of risk, innovation and creativity, and the Arts Program ensures these qualities remain central to the district’s unique identity. Generous support of Times Square Arts is provided by the New York State Council on the Arts, the New York City Department of Cultural Affairs, and the National Endowment for the Arts. Visit http://www.timessquarenyc.org/times-square-arts/index.aspx for more information. Follow us on Twitter and Instagram at @TSqArts.