Rana Hamadeh participates in ‘Here and Elsewhere’ at the New Museum 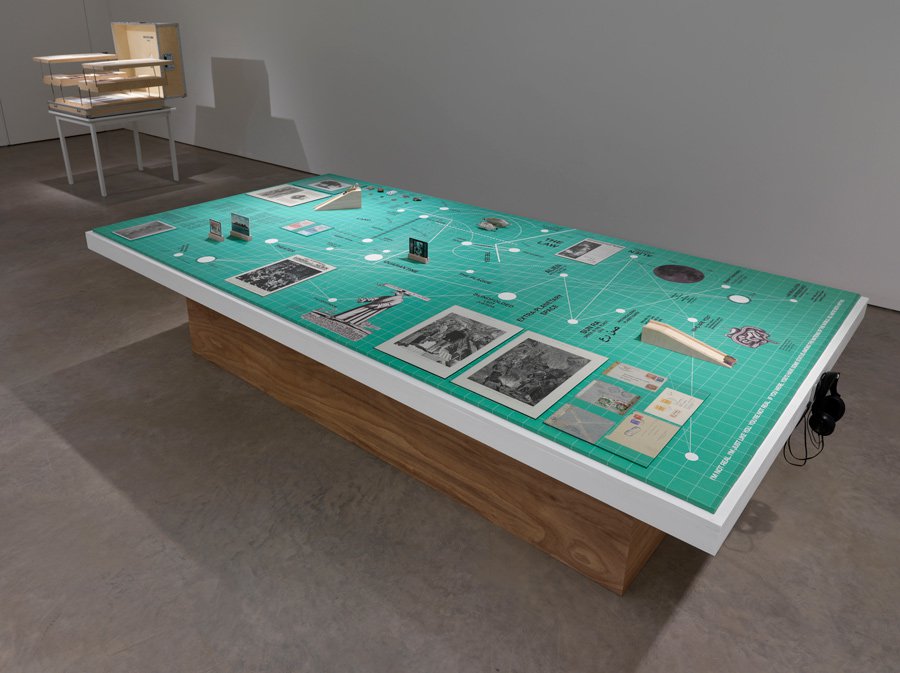 From July 16 until September 28, the New Museum will present “Here and Elsewhere,” a major exhibition of contemporary art from and about the Arab world, with work by a.o. Rotterdam-based artist Rana Hamadeh.

From July 16 until September 28, the New Museum will present “Here and Elsewhere”, a major exhibition of contemporary art from and about the Arab world. The exhibition will feature about 40 artists and collectives; among them is Rana Hamadeh, a Rotterdam-based artist whose works often take shape as performance lectures, installations, and publications.

As part of “Here and Elsewhere” the New Museum will present Hamadeh‘s installation The Big Board or ‘And Before It Falls, It Is Only Reasonable to Enjoy Life a Little’ (2013), which is part of her long-term research project “Alien Encounters.” The Big Board was inspired by Sun Ra’s 1974 film Space is the Place, Oskar Schlemmer’s 1926 diagram for Gesture Dance and Paulus Fürst’s 1656 engraving of Doctor Schnabel of Rome. These reference were present on a large green table complete with gridlines on which Hamadeh mapped out stories, conversations, historical documents and other objects and artefacts – meteorite pieces from various parts of the world, for instance, or various coal scrip tokens used in the American South, as well as a plantation token used in Guatemala – that worked together to produce a networked constellation of meaning and association, united by the themes of hygiene, immunization and quarantine throughout history. References included Achille Mbembe’s text ‘Necropolitics’, which suggests that the ultimate expression of sovereignty resides mainly in the power and the capacity to dictate who may live and who must die. In this interview, Hamadeh discusses the performance in relation to her practice, and the idea of how to construct an imagined topography of the contemporary world order based upon the proposition of ‘provincializing’ earth. About Here and Elsewhere

In the past ten years, the work of artists and cultural spaces in cities such as Amman, Beirut, Cairo, Dubai, Doha, Marrakesh, Ramallah, and Sharjah, among others, have established critical points of global access. However, despite a growing international interest in contemporary art from across North Africa and the Middle East, there have been few presentations of art from these regions in New York. “Here and Elsewhere” is the first museum-wide exhibition in New York to bring together more than forty artists from over twelve countries in the Arab world, many of whom live and work internationally.

The exhibition borrows its title from a 1976 film-essay by French directors Jean-Luc Godard, Jean-Pierre Gorin, and Anne-Marie Miéville. Their film, Ici et ailleurs [Here and Elsewhere], was conceived as a pro-Palestinian documentary, but developed into a complex reflection on the ethics of representation and the status of images as instruments of political consciousness.

Taking inspiration from Godard, Gorin, and Miéville’s film—which has had a strong impact on an entire generation of artists in various Arab countries—the exhibition pays particular attention to the position and role of the artist in the face of historical events. Through different methodologies, an unconventional form of lyrical documentary and personal reportage emerges in works in which the artist is vested with the responsibility of revising dominant historical narratives. Other artists in the exhibition undertake experimental approaches to archival material, rewriting personal and collective traumas, and weaving fragments both real and imagined into their work. For others, traditional mediums like painting, drawing, and sculpture record subtle and intimate shifts in awareness, using images as tools for self-discovery, chronicles of current events, or registers of personal histories.

A reflection on what is at stake in the act of representation characterizes many of the works in the exhibition, as many artists reconsider the task of witnessing and chronicling social and political changes. In addition, a number of pieces initiate a reflection on images as sites of conflict or spaces of intimacy, while others develop a critique of media representation and propaganda.

In keeping with the New Museum’s dedication to showcasing the most engaging work from different parts of the world, “Here and Elsewhere” joins a series of New Museum exhibitions that have introduced urgent questions and new aesthetics to New York audiences.

Rana Hamadeh (b. 1983, Beirut) lives and works in Rotterdam. Hamadeh is a performance and visual artist who is interested in a curatorial approach within her artistic practice. She works on long term discursive research-based projects that involve different levels of collaborations, and that are presented to the public in the form of lecture-performances, audio/text based installations, mind maps, and public/documented conversations. She initiated in 2008 and 2011 two ongoing research-based projects, ‘GRAPHIS N˚127′ and ‘Alien Encounters’, under which she has been producing different art works, publications and texts. Her work has been presented at Beirut, Cairo (2013), The Townhouse Gallery, Cairo (2012), Van Abbemuseum, Eindhoven (2011/2008), Beirut Art Center, Beirut (2010), Teylers Museum, Haarlem (2010) and New Museum, New York (2009). She is currently auditing within the Curatorial Knowledge PhD programme at Goldsmiths University, London. 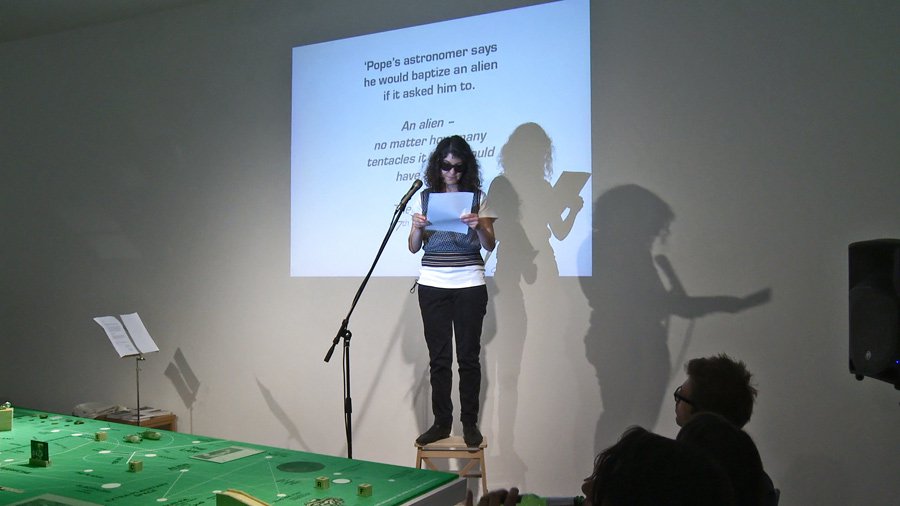