Rembrandt's Allegory of the Sense of Smell, reunited with its sister-paintings in 'The Promise Of Youth'.

From a basement in New Jersey, to a reunion with its sister-paintings at the Getty museum. Before one of Rembrandt’s earliest paintings, The Unconscious Patient (Allegory of Smell), was discovered during auction, the whereabouts were unknown. It seemed to be held covered in dust at a New Jersey basement, without the knowing of its householders. Currently, the painting is reunited with three other paintings from Rembrandt’s series on the five senses, The Unconscious Patient (Allegory of Smell), The Stone Operation (An Allegory of Touch) and The Three Musicians (An Allegory of Hearing). Thanks to the generosity of the Leiden Collection, which owns all three panels, they’re on public view for the first time in over 300 years at the Getty Museum. You can find them at the Rembrandt gallery, on public view side by side, until August 28. 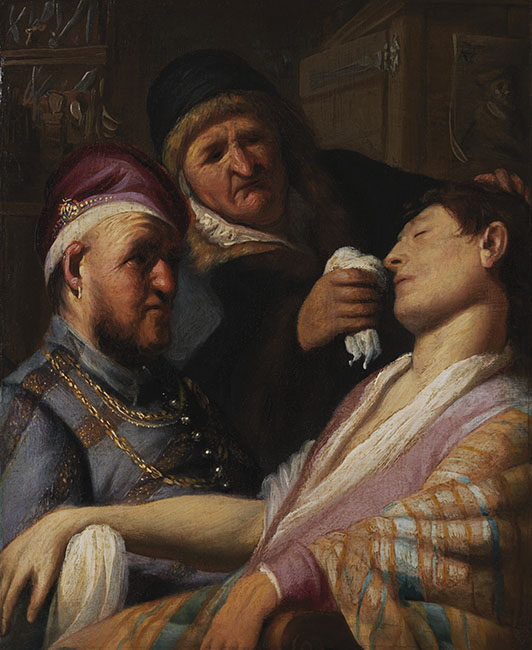 The Reunion of Rembrandt’s ‘Senses’

On September 22, 2015, a panel painting of figures in an interior appeared at auction at Nye & Co. in New Jersey. It was catalogued as “Continental School Nineteenth Century.” Despite the discolored varnish, condition issues, and awkward additions to the panel, the curious figure group struck knowledgeable viewers as singularly important. After vigorous bidding, the so-called Triple Portrait with Lady Fainting was acquired by a European phone bidder. The subsequent announcement that the painting was thought to be by Rembrandt ignited enthusiasm and conversation around the world.

After conservation treatment (and removal from its ornate gilded frame), the painting looked quite different. Its brilliant palette, descriptive brushwork, and tightly arranged figures confirmed that it was, in fact, related to the earliest known paintings by Rembrandt, depicting three of the senses: The Three Musicians (Allegory of Hearing), The Stone Operation (Allegory of Touch), and The Spectacle Seller (Allegory of Sight). Close scrutiny also revealed Rembrandt’s earliest signature, which you can see at the upper right, cleverly placed on the portrait of a man tacked to the back wall: RHF (Rembrandt Harmenszoon fecit). The rediscovered Rembrandt was the long-lost Sense of Smell from this very same series, painted when the artist was about 18. For more information about these three paintings, visit the Getty blog. 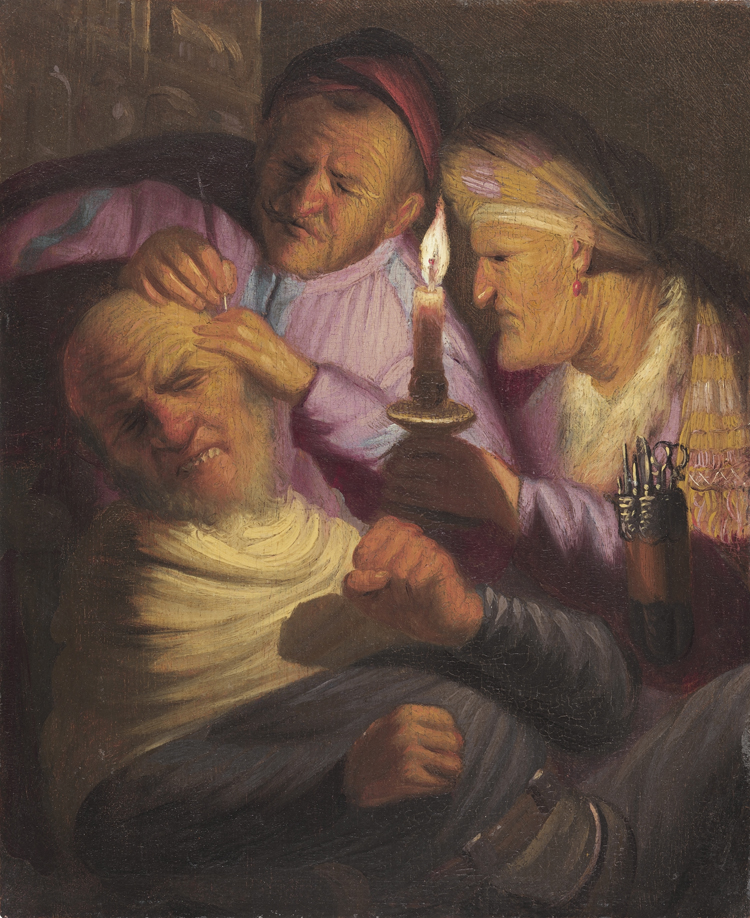 The Stone Operation (An Allegory of Touch) – Image courtesy of the Leiden Collection, New York

“Rembrandt is unquestionably one of the greatest and most-loved painters of the European tradition, whose work still grips modern audiences as strongly as it did his own contemporaries,” says Timothy Potts, director of the J. Paul Getty Museum. “This special installation provides a unique opportunity to witness him at the genesis of his career, some four hundred years ago, as a young man of only eighteen or nineteen just beginning on his professional career. While it is not yet the Rembrandt we know from his maturity, these works already demonstrate his experimental approach and show some of the emotional intensity that was to be an enduring features of his work. It is particularly appropriate to be bringing these works together for the first time at the Getty Museum, as we possesses the most significant collection of early Rembrandts in the United States. Complemented by other loans from Thomas Kaplan and Daphne Recanati-Kaplan’s Leiden Collection, this presentation represents a remarkable visual survey of the development of the artist. We, and other museums, are deeply grateful for Tom and Daphne’s continuing generosity in making his works accessible to a broader public.” Until last year, only three of the five Senses were known to art historians. The exhibition will feature The Sense of Smell along with The Stone Operation (An Allegory of the Sense of Touch) and The Three Musicians (An Allegory of The Sense of Hearing). A fourth known picture from the set, The Spectacle Seller (An Allegory of The Sense of Sight), is in the collection of the Lakenhal Museum in Leiden. The whereabouts of the fifth sense, an allegory of taste, remains unknown. 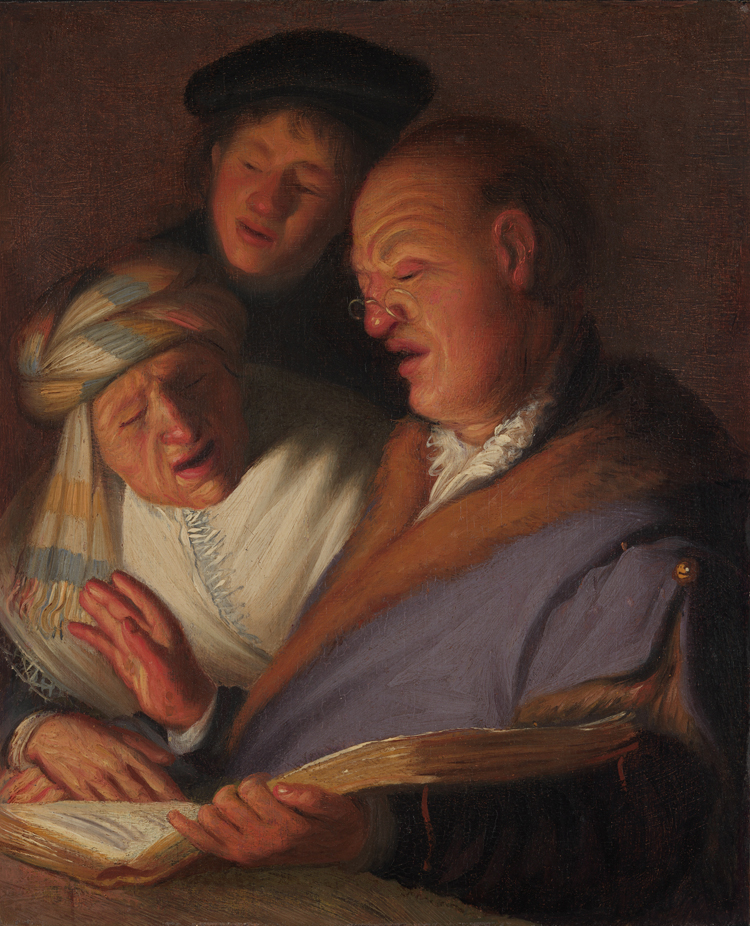 The J. Paul Getty Museum seeks to inspire curiosity about, and enjoyment and understanding of, the visual arts by collecting, conserving, exhibiting and interpreting works of art of outstanding quality and historical importance. To fulfill this mission, the Museum continues to build its collections through purchase and gifts, and develops programs of exhibitions, publications, scholarly research, public education, and the performing arts that engage our diverse local and international audiences. All of these activities are enhanced by the uniquely evocative architectural and garden settings provided by the Museum’s two renowned venues: the Getty Villa and the Getty Center.

About the Leiden Collection

Founded by Thomas Kaplan and Daphne Recanati-Kaplan, the Leiden Collection comprises more than 200 paintings from the Dutch Golden Age. The Collection features unique rarities by some of the greatest artistic innovators of the seventeenth century, including Johannes Vermeer, Frans Hals, and Jan Steen, along with their peers, competitors, and followers. Named for Rembrandt’s birthplace, the Leiden Collection is highlighted by ten Rembrandt paintings that span his career, including the earliest of his known works, the Senses series. In addition to the ten Rembrandts, whose number matches or exceeds all but those in a few national museums, the Collection encompasses the broadest range of masterworks of his many pupils, including Carel Fabritius, Ferdinand Bol, Govert Flinck, Gerrit Dou, Aert De Gelder, Jan Lievens (Rembrandt’s studio mate), and Pieter Lastman (their mutual teacher). In sum, the Collection features the largest and most extensive representation of Rembrandt and the Rembrandt School in private hands. By focusing on portraits, history paintings, and genre scenes, the artwork in the Collection brings the everyday world of the 1600s to life. Since its creation, the Leiden Collection has prided itself on sharing its artworks with museums across the globe for long-term loans and special exhibitions and, in doing so, has become the art world’s singular “lending library” of seventeenth-century art.