From October 8 2016 until January 1 2017, the OMI International Arts Center will have an exhibition of work by Remy Jungerman named "Awe"

From October 8 2016 until January 1 2017, the OMI International Arts Center in Ghent, NY, will have an exhibition of work by Remy Jungerman named “Awe”. Jungerman was a resident of the OMI in 2003, and is returning now to show his more recent wo, which portrays his global citizenship and his deep roots in both his Homeland and adopted country. The opening reception will be on Saturday, October 8 at 2 PM.

Remy Jungerman creates sculptural relief works which bring to mind modernist architecture, beams, window lintels, tracks and building blocks. Jungerman’s strong linear compositions, punctuated by lines and blocks of color conjure the paintings of Piet Mondrian and the De Stijl movement in Dutch Modernist design and architecture which was characterized by pure abstraction, simplified colors and compositions. These constructions are rooted in the modern Western World, and Amsterdam in particular the City where Jungerman now lives.

However the surface of his works reveal layers of personal history, overlapping of cultures, a global view. The outermost layer of Jungerman’s work is a slip of kaolin porcelain clay painted on with his hand and then delicately scratched away to create an incised grid. This highly refined clay creates a luminous, chalky, skin like layer. Underneath the slip layer we discover a pattern of woven fabric, the grid, again. The surface of these works transports us to his homeland Surinam and the ritual practices of Winti the Afro-Surinamese traditional religion. The fabrics are those used in the rituals and worn by participants in. The kaolin clay is also used to decorate the skin of those participating in Winti rituals. 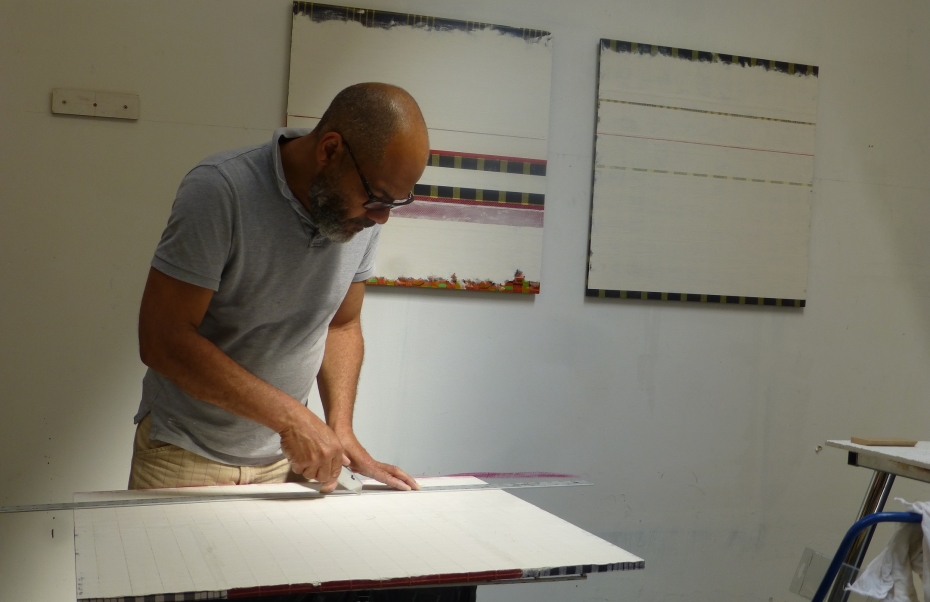 Last year, Dutch Culture USA met with Remy Jungerman for an interview, which you can read here.