robert henry contemporary in New York features Remy Jungerman: Based In from Oct 26

Remy Jungerman’s “Based In” will be featured at the robert henry contemporary gallery in Brooklyn, New York from October 26th, 2018 until December 21st, 2019. The opening reception takes place on Friday, October 26 from 6-9pm.

“Based In,” a solo exhibition of new sculpture and paintings by Remy Jungerman, a Dutch artist of Surinamese descent, explores aspects of the spiritual culture from his country of origin and the visual culture of his adoptive homeland. Jungerman intertwines these cultural signs and symbols into three-dimensional constructions using wood, cotton fabric, kaolin, nails and paint and two- dimensional compositions in cotton fabric, kaolin and paint. The exhibition will feature two wall constructions and two new paintings.

“My research and work focuses on finding the running thread that links together the cultural esthetics of three continents: Africa, Europe and the Americas.” – Remy Jungerman

The horizontal low-lying land of both Suriname and The Netherlands, coupled with the radical flatness of the ocean are reflected in the lines of Jungerman’s work. The long, narrow 3-D grids of his sculptural work and the 2-D grids in his paintings reference the patterns of Surinamese plantations as well as the geometry of fields and dykes of Holland. The bifurcated horizontal appearance of the ocean is a metaphor for the separation of land and cultures, but also acts as a line of connection between the cultural and physical metaphors abundant in Jungerman’s work. 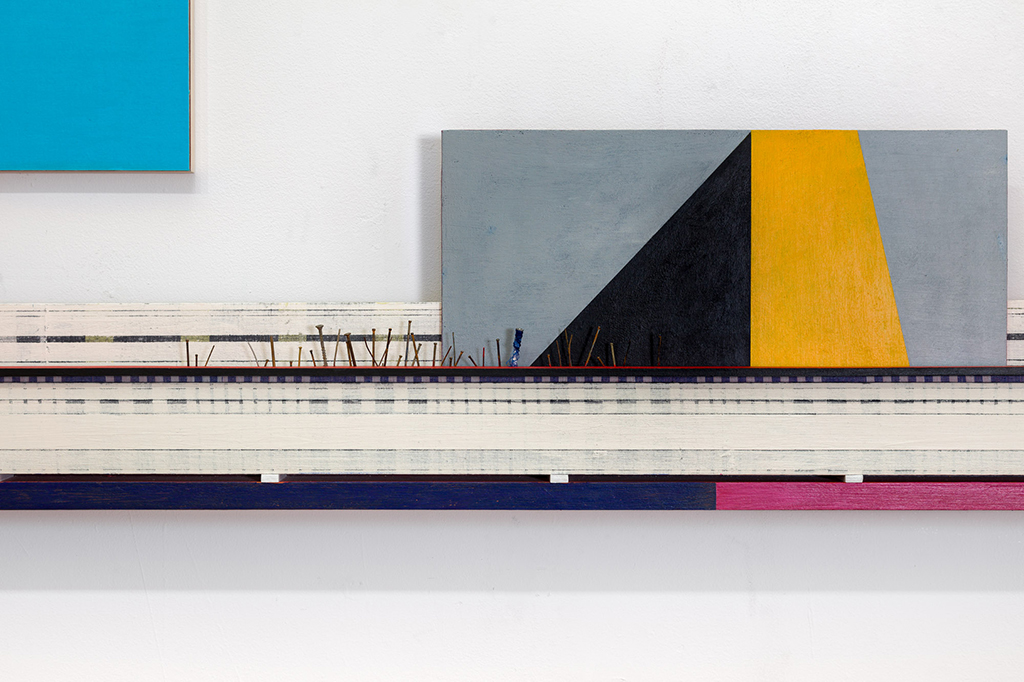 Jungerman’s mother’s family descended from the Maroons, African slaves who escaped captivity and established free societies often settling with the native populations in the jungles of the Americas. This cultural heritage of customs and rites brought to Suriname from various parts of the African continent, particularly the Winti religion of Suriname, carries with it the use of particular materials imbued with symbolic meaning and can be seen in Jungerman’s use of geometric Afro-Surinamese textiles, kaolin and nails. Each fabric’s pattern and colors have specific meanings in the Winti religion, the kaolin (a soft white clay) rubbed on the face and body, acts as a talisman to protect rituals from negative influences and, like African sculptures, each nail represents a particular wish or prayer.

In addition to references to the flat landscape of The Netherlands, Jungerman also incorporates the aesthetic of De Stijl, a Dutch movement in art and design founded in 1917 that advocated pure abstraction and universality could elicit spiritual enlightenment by a reduction to the essentials of form and color, especially the use of the straight line. His sculptures and paintings abound with references to Piet Mondrian’s grids and lozenges and Gerrit Rietveld’s Red and Blue Chair, among others. It is geometry that fuses together Jungerman’s cultural and aesthetic influences. The binary nature of the grid is representative of Jungerman’s dual cultural and aesthetic identity and is a means for expressing complex individual feelings. The opposing horizontal and vertical lines presented with the authority of exquisite craftsmanship are rich in emotions and laden with metaphoric potential.

Remy Jungerman (b. Moengo Suriname, 1959) attended the Academy for Higher Arts and Cultural Studies, Paramaribo, Suriname, before moving to Amsterdam where he studied at the Gerrit Rietveld Academy. Since his first group exhibition in Amsterdam’s Stedelijk Museum, Jungerman has participated in several solo and group exhibitions worldwide. In 2008 he received the Fritschy Culture Award from the Museum het Domein, Sittard, The Netherlands. His work has been featured in numerous publications and is included in institutions and private collections worldwide, including in The Netherlands: Stedelijk Museum, Amsterdam; Gemeentemuseum, Den Haag; Centraal Museum, Utrecht; Museum Het Domein, Sittard; Zeeuws Museum, Middelburg; NAI Rotterdam; Fries Museum Leeuwarden; Africa Museum Berg en Dal; Museum Arnhem; International: Art In Embassies, US Department of State, Suriname; Rennie Collection, Vancouver; The Francis J. Greenburger Collection, NY, Art Omi Collection, NY and Hudson Valley MoCa, Peeksill, NY. Remy Jungerman and Iris Kensmil have been selected by Benno Tempel to represent The Netherlands at the 58th edition of the Venice Biennale in 2019 in a joint presentation titled, The Measurement of Presence. He lives and works in Amsterdam.

Until December 31st, sculptor and mixed-media artist Remy Jungerman is also a resident at The International Studio & Curational Program (ISCP), Brooklyn, NY. This one-year residency is supported by the Mondriaan Fund of the Netherlands. Take a look at ISCP’s mix of international contemporary art on November 9th and 10th during Fall Open Studios.